She started a global movement at the age of 15, dominated headlines and became TIME’s youngest ever individual Person of the Year in 2019. But Greta Thunberg was understated when reflecting on her year. “I have not accomplished anything,” she told TIME in Lisbon, after a rough trans-Atlantic sailing trip brought her back from a four-month climate strike tour around North America. “I have just acted on my conscience and done what everyone should be doing.”

Acting on her conscience has spurred millions around the world to act, whether it’s eating less meat, eschewing air travel or joining a weekly climate strike. What began with the solitary teenager in a blue hoodie striking from school on the steps of the Swedish Parliament in August 2018 to protest government inaction on climate change swelled to an estimated 4 million people joining strikes in September 2019, in the largest climate demonstration in human history. Friends and family, and even Thunberg herself, didn’t expect the movement to grow to that size.

She too has grown along with it—from being a quiet teenager to a symbol for millions speaking to the whole world. Her persistence has propelled the climate crisis to the forefront of global public consciousness, and shown that a generation of young leaders are ready to step up where adults have faltered. “We are the ones right now who are leading the way,” Thunberg told thousands at another mass strike in Madrid, at the same time as the U.N. climate talks. “The people in power need to catch up with us.” —Suyin Haynes 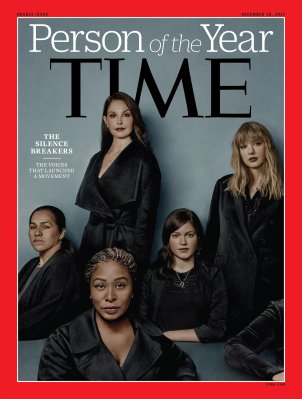 2017: The Silence Breakers
Next Up: Editor's Pick