Sadako Ogata was settling in as the head of UNHCR in 1991 when more than a million Iraqi Kurds fled the fallout of the Gulf War. She jumped onto a helicopter to the Iraq-Turkey border to hear firsthand accounts and promised rapid aid.

Nicknamed “the diminutive giant,” Ogata—who stood under 5 ft. tall—gained a reputation as a formidable negotiator. The only Japanese citizen and first woman to lead the UNHCR, she was re-elected three times and boldly expanded the agency’s mandate to include internally displaced persons. Throughout the 1990s, which she called the “turbulent decade” of her tenure, she navigated crises in places from Afghanistan to the Balkans to Rwanda, helping to protect some of the world’s most vulnerable. —Laignee Barron 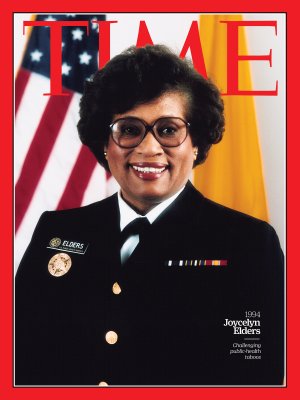 1994: Joycelyn Elders
Next Up: Editor's Pick