The rise of Bernie Sanders as the Democratic Party’s presidential frontrunner has shaken up politicians and pundits surprised that an avowedly left-wing candidate is beating more traditional rivals. These political insiders have speculated about a wide range of reasons for his rise, from the appeal of Sanders’s promise of free universal health care to the large field of moderates to challenge him.

There is undoubtedly a long and complex list of reasons for his success, but there’s one factor that often gets swept under the rug by political pundits: Sanders’s positioning of himself as the climate candidate in a race where voters care a lot about climate change.

Polling shows how the issue of climate has captured the attention of voters. Across the early states in the Democratic primary, global warming has consistently ranked as voters’ second priority, after health care. In Iowa, 21% of Democratic caucus goers ranked it as the most important issue; in New Hampshire, 25% of Democratic primary voters said the same; in Nevada, that number hit 25%.

There’s a pretty clear reason for that concern. Despite media neglect of the topic, people in those states are feeling the issue in their backyards. In Iowa, as I reported from the state last year, residents have faced a series of catastrophic floods that destroyed communities and hurt the ailing agricultural sector. New Hampshire’s winter sports industry is suffering from the unpredictable winter weather. In Nevada, high temperatures combined with drought pose an existential threat to the city of Las Vegas. “We have to do something in order to ensure that we have a future,” said Nevada Gov. Steve Sisolak, a Democrat, at a climate-themed press conference ahead of his state’s caucuses, adding that voters in his state view climate change as “one of the top issues.”

These states may have special stories, but polling suggests the interest in climate isn’t likely to disappear. Nearly 30% of voters in states with primaries between Feb. 22 and March 17, in other words the next batch of states to vote and caucus, say climate change is one of their top two issues, according to a poll released by Climate Nexus, in partnership with the Yale University and George Mason University.

All the Democratic candidates talk about climate change, to varying extents, yet Sanders has succeeded at portraying himself as the climate candidate. For years, Sanders has talked about the issue, including calling it an “existential threat” when most laughed off the characterization.

“Four years ago…I was on a national debate and a moderator said ‘what do you think is the great national security crisis facing this country?’ and I said ‘climate change,’” Sanders recounted at an Iowa climate rally last November. “People kind of didn’t fully appreciate that answer, but the point is over the last four years as I go around the country today, people do understand.”

On the debate stage, he finds ways to incorporate climate into seemingly unrelated questions. He uses climate as a justification for key policy decisions, like his vote against President Trump’s NAFTA revision. “Climate change is one of the biggest issues that Bernie Sanders addresses in his campaign,” says Sanders deputy campaign manager Ari Rabin-Havt. “Climate plays an absolutely vital role in terms of why we think people support us.”

It also helps that he’s made friends with climate activists. Early last year, I spent a day on Capitol Hill with activists from the Sunrise Movement as they marched from office to office of soon-to-be presidential candidates demanding that they support a Green New Deal and reject donations from fossil fuel executives. In most cases, the activists were met with polite smiles from staffers and shuffled away. Sanders personally welcomed them into his office. “It starts with what you’re doing, from the bottom on up,” he told them. “I just want to thank you.” Less than a year later, Sanders won the Sunrise Movement’s endorsement.

At a rally in Iowa last fall, Sanders brought a group of A-list climate activists including Alexandria Ocasio-Cortez, the New York congresswoman known for the Green New Deal, and well-known activist and author Naomi Klein. If you were a Democrat caucusing in Iowa, it would have been hard to miss Sanders talking about climate.

Of course, none of this means that Sanders is the best candidate on the issue. Many argue that his divisive reputation would prevent him from actually enacting his policies. Others point out with good reason that his lack of support for a carbon price is counter-productive and illogical. Indeed, many serious climate policy wonks have endorsed other candidates and their plans.

Still, it seems wise to point out that Sanders’s history talking about the issue with the sense of urgency that others are only now adopting must be an asset in a primary where voters finally care.

—With reporting by Lissandra Villa/Washington, D.C. 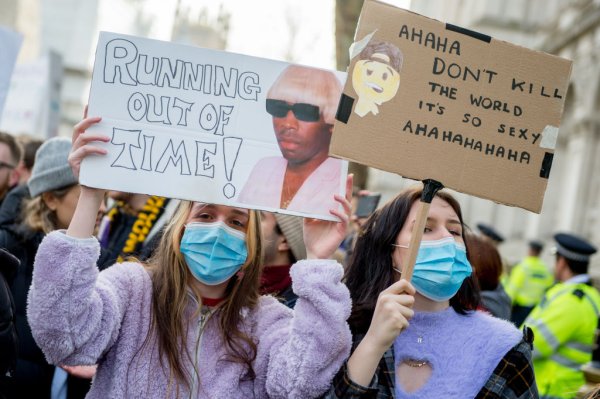 Every Child Faces 'Existential Threats' From Climate Change
Next Up: Editor's Pick