CBS and producers of The Amazing Race announced Friday that they are suspending production of the long-running reality TV show’s 33rd season as coronavirus continues to spread around the world.

All the show’s staff and contestants are returning home, a CBS spokesperson tells TIME in an emailed statement.

“At this time, no racers or anyone on the production team traveling with them have contracted the virus, or shown symptoms, and we are not aware of anyone being exposed to it,” the spokesperson said. “Out of an abundance of caution, everyone involved in the show will continue to be monitored when they return home. The health and well-being of the racers and the production team are our top priorities.”

On The Amazing Race, contestants compete for $1 million through a series of physical and mental challenges, taking place in cities and locations around the world. Each episode usually sees the contestants traveling from one city — or country, or continent — to the next; each season’s “race” as a whole circumnavigates the globe.

Contestants on The Amazing Race 33 had so far only visited England and Scotland before production was suspended, CBS says. In the U.K., 20 people have tested positive for coronavirus — officially known as COVID-19 — as of Friday evening. No cases have been declared in Scotland.

The network and show producers have not yet determined a start date to resume filming. The teams — which are believed to include a pair of contestants from the CBS show Love Island, in a reality casting “crossover” — had completed three episodes before suspending production. CBS did not provide any information as to whether the season’s planned “route” would have led to countries grappling with more serious coronavirus outbreaks.

Several events throughout the world have been canceled amid coronavirus fear — from fashion weeks to tech conferences to religious pilgrimages. On Thursday, the K-Pop major boyband BTS announced the cancelation of planned concerts in South Korea where more than 2,000 people have been diagnosed with the virus and 13 people have died; speculation that the outbreak will impact this summer’s Olympics in Japan continues to swirl. Officials in Switzerland have altogether banned large events of 1,000 or more people. 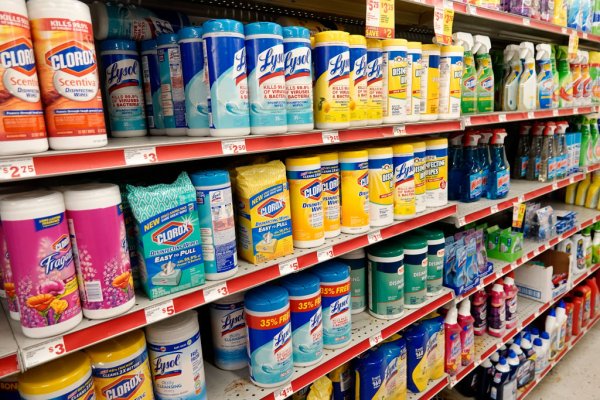 Americans Are Stockpiling Cleaning Products Due to COVID-19 Fears. Do They Actually Prevent Coronavirus?
Next Up: Editor's Pick