What Happens Next with the Violence Tearing Apart India

A resident looks out at burnt-out and damaged residential premises and shops following clashes between people supporting and opposing a contentious amendment to India's citizenship law, in New Delhi on Feb. 26, 2020.
Sajjad Hussain—AFP via Getty Images)
Ideas
By Ian Bremmer
Bremmer is a foreign affairs columnist and editor-at-large at TIME. He is the president of Eurasia Group, a political-risk consultancy, and GZERO Media, a company dedicated to providing intelligent and engaging coverage of international affairs. He teaches applied geopolitics at Columbia University’s School of International and Public Affairs and his most recent book is Us vs. Them: The Failure of Globalism.

It takes a lot to overshadow a foreign visit by a sitting U.S. president. India managed the feat this week, as Delhi was plunged into violent chaos as protests over India’s controversial new citizenship law reached disturbing new levels.

Because it’s India, home to roughly 18 percent of the world’s population. But more than that, India was supposed to be a symbol—for emerging markets making the transition to advanced industrial status, and as a pluralistic society in which hundreds of millions of people belonging to different faiths could coexist peacefully. Both those storylines are falling to the wayside.

India’s Prime Minister Narendra Modi—vegetarian, yogi, hugger—first came to national power in 2014 as an economic reformer who promised to shake up India’s sclerotic bureaucracy. Though he had made a name for himself as the chief minister of Gujarat (one who often turned a blind eye to violence against Muslims), by the time Modi was approaching the premiership, he had refashioned his image to present himself as a competent, pro-business technocrat. That was a compelling message for millions of Indians who hadn’t seen many of those before in national politics, and he convincingly won election. Modi quickly set about enacting both economic and social reforms.

Not all those reforms were successful, but they were ambitious. Eventually though the reforms India’s government championed started yielding less and less political returns for Modi. As Modi geared up for his reelection campaign with a slowing economy, he began to stoke the flames of Hindu nationalism, which made sense from a political numbers perspective given that 80 percent of the country is Hindu (though the country is also home to 170 million Muslims). And while that Hindu nationalism (and the accompanying anti-Muslim sentiment it entails) helped him secure reelection, he hasn’t let up—in December, his government introduced and passed the Citizenship Amendment Act (CAA), which fast-tracks citizenship for persecuted religious minorities from Afghanistan, Pakistan, and Bangladesh as long as they met certain criteria, chief among them that they are not Muslims. The act is widely seen as anti-Muslim despite the government’s protestations to the contrary.

Unsurprisingly, the citizenship announcement—along with plans to build detention centers to house (primarily Muslim) people that don’t have the proper documentation to prove their legal-status in the country—have inflamed passions in the country’s Muslim community, who have been protesting on and off for the last few months. Matters reached a fever pitch this week in Delhi when Kapil Mishra, a member of Modi’s BJP party addressed a rally against a group of protestors (mainly women and Muslim) over their closure of a road in protest of the citizenship law. Mishra issued an ultimatum to the police, saying they either remove the demonstrators, or his supporters will. They made good on that threat. As of last count, more than 300 people had been hurt and more than 40 killed, the worst violence Delhi has seen since the 1984 riots that targeted Sikhs following the assassination of prime minister Indira Gandhi.

Not that you would know much about the religious strife gripping India based off U.S. Donald Trump’s comments during the trip. Given the opportunity to comment, Trump not only passed at the offer but actually commended Modi on the religious freedom being enjoyed throughout India.

Trump’s decision not to engage on the religious violence may well have been the highlight of the trip for Modi, who has been furiously trying to rehabilitate his international standing; had Trump commented, Modi would have been forced to talk about the issue as well, a fact that he has so far avoided doing (he eventually tweeted out a simple call for “peace and brotherhood” a couple of days later). Trump’s silence on the issue allowed for a quick and successful foreign visit, even as the long-shot goal of the trip—a trade deal between the U.S. and India—failed to materialize. A new deal to sell military arms to India did get inked.

The reality is that Modi is now attempting to lead two separate India’s—one for the world to see, where foreign leaders visit and he visits foreign leaders, and the second India which is just bubbling beneath the surface. Increasingly though, the two are bleeding into one another—this is the second time a planned trip by a foreign leader was punctuated by public violence since the new citizenship law was announced (Japanese Prime Minister Shinzo Abe was forced to skip his December trip to India due to violence in Assam).

The violence is only likely to only get worse from here—to date, the anti-Citizenship Amendment Act protestors have been peaceful when protesting, but the events of this week may change their calculus. Modi, meanwhile, no longer has to play host to a foreign dignitary, giving him and his BJP party more room to crack down. What’s more, Modi’s demonstrated comfort pivoting from economic reformer to Hindu nationalist has already begun unnerving foreign investors; the violence of this week will unnerve them even more, hitting India’s economy and likely forcing Modi to rely even more on Hindu nationalism as a political crutch going forward. And that’s before coronavirus…

N/A—usually, polling of a leader’s favorability gives good insight into their thought process. Unfortunately, India doesn’t really do polling given the complexity and scale required for good numbers.

If you haven’t read the excellent Dexter Filkins New Yorker profile about Modi’s precedent-busting rise, you really should.

You can’t understand India today without understanding the man who leads it, and will continue to do so for what’s shaping up to be a consequential next few years.

The One Major Misconception:

That the hard part for Modi is now over since Trump left the country. Maybe more than other world leader (Israel’s Bibi Netanyahu has an election next week, so he doesn’t count), Modi has genuine affection and thrown in his lot with Donald Trump, and he has been rewarded with a U.S. president who has kept silent on Modi’s most controversial policies. If Trump fails to win reelection, there will be plenty of world leaders that will be over the moon—Modi won’t be one of them. And if Modi thinks he has problems on his hands now, imagine how he’ll feel if he also has to face a U.S. president focused on holding Modi to account when it comes to human and religious rights. Even if Trump does win again, progressive members of Congress will look to take punitive measures against India for its human rights violations. 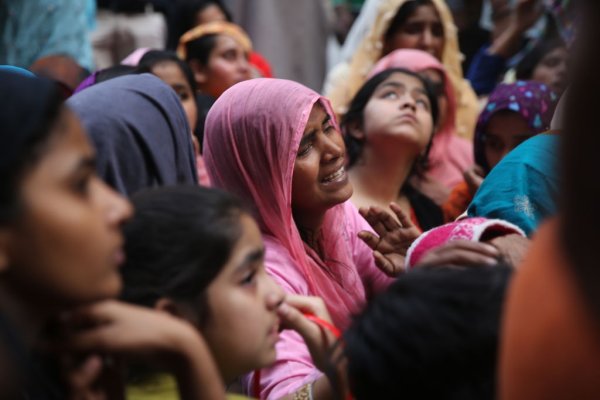 Modi Looks the Other Way as Delhi Burns
Next Up: Editor's Pick