She's Known for Casting Doubt on Women's Claims of Abuse. Now She's Reconsidering That Position—But Only for Herself

Katie Roiphe has long been an easy target for feminists, despite claiming the mantle herself. The writer’s philosophical argument with mainstream feminism, articulated in books like The Morning After (1993) and dozens of essays, boils down to this: If we admit that men have physical and structural power over women, then women must be powerless. Roiphe has repeatedly asserted women’s agency — even to the point of casting the stories of college students who said they were raped as fantasies born from regret. She sealed her fate as persona non grata in feminist corners of the internet in 2018 when she called the #MeToo movement into question in a controversial essay for Harper’s. Before it was published, that piece stirred up rumors of plans to out the creator of a document where women in media listed allegations against their male colleagues (which Roiphe denies intending to do), and challenged women’s descriptions of hostile workplace cultures: “The idea of this ubiquitous, overwhelming fear is repeatedly conjured and dramatized by Twitter feminists.”

In The Power Notebooks, a new series of essays that blend memoir and biography, to be published on March 3, Roiphe comes dangerously close to admitting she was wrong about the power dynamics between men and women. The 70-some chapters, written in a muddled stream-of-consciousness style, deal primarily with Roiphe’s relationships with a series of toxic men. She intersperses personal stories with musings on successful women writers, like Sylvia Plath and Simone de Beauvoir, and how they long maintained submissive and abusive relationships of their own. But even after years spent poring over their letters and diaries, Roiphe seems unable to reconcile the passivity of her literary heroes in the face of cruel romantic partners — and makes little progress in determining her own place in that lineage.

The book will leave readers in search of a cogent feminist philosophy wanting, though those eager to better understand Roiphe as an individual may appreciate the growth she shows over the course of the essays. As the writer grapples with a lifetime of troubling experiences, she offers a new generosity to herself. Unfortunately, that’s as far as she extends it.

The most compelling moments in The Power Notebooks come when Roiphe analyzes her own stories of abuse. Roiphe avoids using that label herself, as is her right as the author of her own narrative — but as they are written, these incidents read as just that. She begins her story with a jarring scene in which her then-husband randomly stops their car and orders Roiphe to get out with their baby, leaving her to walk a mile home with the child in her arms. She goes on to detail how this partner used to yell at her so loudly that the neighbors would call in concern, and her child would be left shaken and unable to eat.

When a friend, in passing, calls her own ex “abusive” in a later scene, Roiphe stops to admire what is, from her perspective, the friend’s boldness. “I find that word difficult to use,” she writes, “in part because of its moral clarity, a clarity I don’t at all feel in relation to my own life.” She adds, “It’s easier to think that a crazy thing happened between us a long time ago and that it is no one’s fault.”

Later in the book, Roiphe reveals the formative experience that has colored her view of men, women and power. She writes that when she was 15 years old, she engaged in a sexual relationship with a 30-something rabbi. The rabbi was an adult and she was a child. He held an institutional position of authority over her, offering life advice to her and other young people in her community, and used that power to seduce her. But again, when Roiphe reflects on her experiences, she struggles with the question of whether she was a victim. “To what degree was he in power, abusing power? To what degree was the 15-year-old me in control of the situation, the way I remember?” Watching her try to litigate the power dynamics of this situation may be puzzling or even frustrating for readers who view it as so obviously corrupt.

Still, the desire not to be perceived as vulnerable is understandable. Women and men who have experienced abuse react in many different ways, and it’s common not to admit experiencing abuse for years or even decades. And Roiphe teeters on the revelation that she cannot blame herself for the abuse she’s suffered. “I have so long and so passionately resisted the victim role because I was not purely a victim, not purely traumatized,” she writes, “but I am beginning to realize that this does not mean I was not also or very complexly those things. Because I was not purely powerless does not mean I was not facing a man who was twisting or distorting his power.”

Roiphe’s articulation of that sentiment might be read as a breakthrough, if only she applied it to anyone aside from herself. This is the most striking problem with the book. In the very next chapter, Roiphe turns her attention to her teenage daughter, who has written a poem about harassment. The girl writes she has learned from experience to wear a sweatshirt so men on the street won’t leer at her, to quickly change train cars when a drunk stranger asks her to sit next to him. Roiphe’s reaction? “The dawning of her power over men is simultaneous with her growing vulnerability. She discovers her power to attract men as a burden, a danger.”

That Roiphe thinks of her daughter as being in a position of power while being catcalled is startling. The harassment that women experience walking down the street each day is not a reflection of some kind of sexual liberation or sway they hold over men. It’s a way for men and boys to demonstrate their dominance over the women and girls who happen to exist near them — the harassers can do or say whatever they want, and those in their path can do little about it.

Even outside the realm of abuse, Roiphe seems unable to draw a connection between her own experiences and those of other women. She spends an entire chapter bemoaning the decisions by feminist writers — including Roxane Gay, Joan Didion and Zadie Smith — to admit their vulnerabilities in their work. She recalls their small stories of throwing up before teaching a first class, crying in public or rushing barefoot to meet the babysitter, respectively, and deems them “performances of weakness” designed to make them (and their feminist philosophies) more “relatable” and “likable.” Roiphe does not entertain the idea that these women might present genuine, human moments without a political agenda. Nor does she acknowledge that she herself spends much of The Power Notebooks sharing stories that evoke the reader’s sympathy.

Roiphe has truly suffered in life, and to work through her trauma so publicly is an act of bravery. At moments, readers may want to hug her. And how a person who has experienced trauma chooses to tell her story is her decision alone. But Roiphe’s choice to disclose stands separately from the way she imposes her own lessons on other women. It’s impossible to ignore the fact that this writer has built a career on attacking her peers — women who have suffered the same kinds of hurt that she has, who share details about their lives to connect with readers just as she is doing. In The Power Notebooks, Roiphe is finally making room for herself to express weakness and to feel pain. Hopefully, someday, she will do the same for the rest of us. 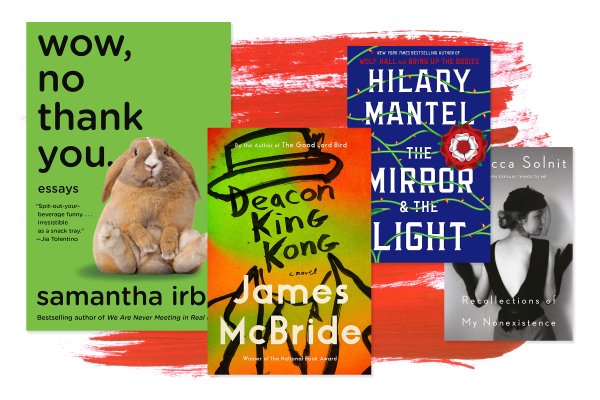 The 11 New Books You Should Read in March
Next Up: Editor's Pick