The Pentagon in Arlington County, is seen from the air on Dec. 8, 2019.
DANIEL SLIM—AFP/Getty Images
By Tony Capaccio / Bloomberg

The Pentagon’s five-year nuclear weapons plan calls for requesting at least $167 billion through 2025 — building from the $29 billion sought for next year to $38 billion, according to previously undisclosed figures.

The commitment includes research, development, procurement, sustainment and operations. It reflects a major boost to an effort started under President Barack Obama to replace aging nuclear systems, such as Minuteman III missiles and command and control systems.

It doesn’t include funding for the Energy Department’s National Nuclear Security Administration, which is requesting $19.8 billion for fiscal 2021, including $15.6 billion for nuclear weapons activities.

Congressional Democrats have been generally supportive of increased nuclear weapons spending, but Defense Secretary Mark Esper is likely to be questioned about the size and scope of the five-year plan when he testifies Wednesday before the House Armed Services Committee.

Esper is also likely to face bipartisan opposition from the defense-focused committee on President Donald Trump’s plan to shift $3.8 billion from Pentagon programs to his wall on the Mexican border.

The plan includes $25 billion for research and procurement — but not support and operations for — the new Columbia-class intercontinental ballistic missile submarine that begins construction this year, $24 billion for improved nuclear command and control and $23 billion for the Air Force’s B-21 bomber.

“What you are seeing here is the beginning of a long overdue modernization of the U.S. nuclear triad,” Tim Morrison, a former National Security Council deputy assistant who followed nuclear issues and is now a senior fellow at the Hudson Institute. “At approximately 6% of the U.S. defense budget, this is a modest investment in the ultimate guarantee of American and allied security.”

Still, “most experts believe the DOD budget will be fairly flat over the next several years” so “if spending on the nuclear weapons enterprise increases by $9 billion over that time, and totals $167 billion, what are the trade-offs in other procurement programs?” asked Amy Woolf, a senior nuclear weapons specialist for the nonpartisan Congressional Research Service. “What will the Pentagon have to give up to support this increase” in funding for nuclear weapons. 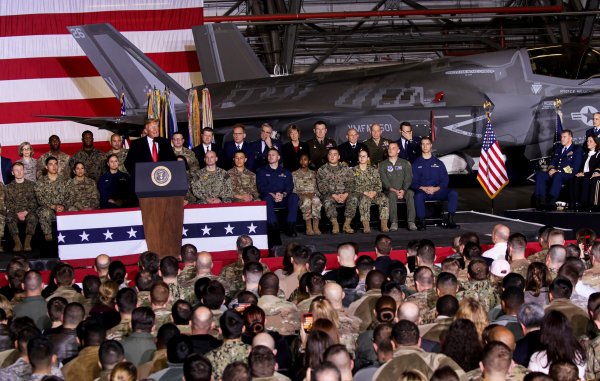 Defense Budget Misses the Future of War
Next Up: Editor's Pick