A 1794 land deed for the first African Free School location in lower Manhattan.
Courtesy of Sotheby's
By Olivia B. Waxman

Sotheby’s announced Wednesday that it is auctioning off a 1794 land deed for the first location of the African Free School in lower Manhattan, one of the first educational institutions founded to prepare free people of color and the children of enslaved people for life after slavery.

The document, recently acquired through a consigner who wishes to remain anonymous, is on display at Sotheby’s in New York City through Saturday, Feb. 29, in honor of Black History Month, and then will hit the auction block at a June sale for books and manuscripts, where the auction house says it expects the document to fetch an estimated $250,000-$350,000.

Dated July 22, 1794, the deed for this land, in what’s now the SoHo neighborhood, makes clear the mission of the school: “Whereas many respectable and benevolent Persons in the City of New York have associated under the denomination of ‘the Society for promoting the manumission of Slaves and protecting such of them as have been or may be Liberated,’ and have Instituted a School in said City, called the African Free School for the humane and charitable purpose of Educating negro Children to the end that they may become good and useful Citizens of the State.”

This document stood out to Selby Kiffer, International Senior Books specialist at Sotheby’s, because of the detail about what the land would be used for. “Often times a land grant is very dry, sometimes just the address, but what’s great about this document is the inspirational language explaining the purpose of the land,” he says.

A 1794 land deed for the first African Free School location in lower Manhattan.
Courtesy of Sotheby's

The New York Manumission Society, which counted Alexander Hamilton and John Jay among its members, connected black people with resources such as legal representation, helped protect them from kidnapping from slave dealers, and put on anti-slavery lectures and readings. Education was part of its work. Efforts to launch its African Free School started in 1787, and, as this document shows, land for one location was acquired in 1794. The school grew from a single-room schoolhouse with 40 children in the 1790s to a network of seven schools educating more than 1,400 students by the time they started becoming part of the New York City public school system in the 1830s, according to the New-York Historical Society, which has an archive of African Free School classroom work.

But the African Free School’s philosophy and approach had controversial aspects. A white headmaster named Charles Andrews oversaw a great part of the school’s increased student enrollment, but was also criticized because he replaced the school’s black headmaster. He then was forced to step down after it was revealed that he supported efforts to send African Americans to Africa. Per Ron Chernow’s Alexander Hamilton biography, lessons at the school emphasized discipline to “paternalistically” keep students in line and fulfill the society’s goal of keeping black people from “running into practices of immorality or sinking into habits of idleness”; the school aimed to dissuade black people from engaging in “noisy entertainments” such as “fiddling” and dancing.”

On top of that, none of the people whom the society aimed to help were actually allowed to join the all-white group.

John Jay, founder of the society, owned five slaves himself — but signed a gradual emancipation law in 1799 as Governor of New York. The state abolished slavery in 1827. As for Alexander Hamilton, he was a member of the society like many other prominent New Yorkers, but the school wasn’t one of his top causes, says Joanne Freeman, a professor of History at Yale University, who edited a book of his writings.

“He’s on the cause of the right when it comes to slavery, but he’s not leading the society or this effort,” Freeman says. “All members of the New York Manumission Society were anti-slavery, but there was a range of views about ending slavery; some people wanted fast action and some people wanted slower action.”

Slavery would be abolished nationwide nearly 40 years after New York took that step, but this document provides a glimpse at anti-slavery activism in the early days of the United States — and a reminder of the complicated and differing views on slavery that are as old as America is. As Kiffer sees it, “The New York Manumission Society was founded in 1785, so less than a decade after the Declaration of Independence, people were already working to end slavery.” 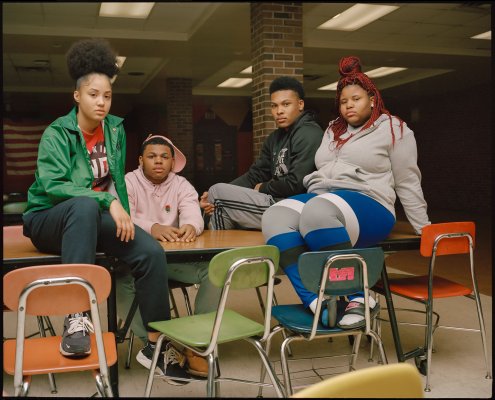 School District Borders Can Worsen Inequality. These Students Are Fighting for a Better Education
Next Up: Editor's Pick