Syrian-British humanitarian worker Mohannad Othman faces a stark choice. It occupies his mind as he drives his two children to Arabic language classes in the Turkish border city of Gaziantep, where he has lived for six years. About 100 miles south of here, in an enclave of Syria’s rebel-held Idlib province—the fate of 90 children and infants, including 20 babies in neonatal incubators—hangs in the balance.

They are patients in a pediatric hospital, funded by the World Health Organization but managed by the Turkey-based Al Sham Humanitarian Foundation. As its CEO, Othman contends daily with the question of whether to shutter Sarmada Hospital, about 20-miles north of Idlib City. The facility currently covers about 40% of Idlib’s needs, but is threatened by an escalating offensive by the Syrian regime and its allies.

Last week, Syrian government forces backed by Russian airpower struck two hospitals to Sarmada’s east, taking them out of service. The safety of the children and incubated babies in the hospital, already forced to share beds due to the attacks on other medical facilities, cannot be guaranteed. “My staff is asking me, should we evacuate or should we stay? We don’t know,” Othman says over coffee at a hotel in Gaziantep. Even if the hospital could obtain ambulances equipped to meet the babies’ 24-hour monitoring needs, no safe destination can be assured. Othman says he brought the problem to contacts within the U.N. but wasn’t given a clear directive on how to proceed.

Destroyed buildings in the Syrian town of Ihsim, in the southern countryside of Idlib, on Feb. 19, 2020.
Omar Haj Kadour—AFP/Getty Images

Othman’s dilemma is a variant of one now afflicting millions of Syrians. In December, Syrian President Bashar al Assad ramped up an offensive aimed at recapturing northwest Syria’s Idlib province, the last rebel holdout standing between the regime and Assad’s total victory.

The military operation has prompted the largest single wave of displacement since the civil war erupted in Syria nine years ago, forcing more than 900,000 people, including over half a million children, to flee their homes. With nighttime temperatures dipping as low as 19°F (-7°C), families have burned garbage to keep warm and children have frozen to death. But returning risks putting them back in the firing line.

Syria is on the cusp of the “biggest humanitarian horror story of the 21st century” the U.N.’s emergency relief coordinator Mark Lowcock said on Feb. 17. With humanitarian camps at full capacity, up to a third of Idlib’s population is estimated to have fled to tents and makeshift shelters close to northwest Syria’s border with Turkey, which already accommodates about 3.6 million Syrian refugees, the majority in urban centers in Turkey’s south.

The largest of those is the sprawling industrial city of Gaziantep, whose population has ballooned by about 30% since the start of the war. As U.N. Deputy Regional Humanitarian Coordinator for the Syria Crisis Mark Cutts warned on Feb 21 of an approaching “bloodbath, a real massacre of civilians,” just south of Turkey’s border, aid workers in Gaziantep are scrambling to tackle the rapidly worsening crisis.

Men load sacks of humanitarian items into a truck in Gaziantep, Turkey, on Jan. 5, 2020. The aid was collected for newly displaced Syrians from Idlib.
Ahmad Al-islam—SOPA Images/Sipa USA

A decade ago, Idlib would have seemed an unlikely stage for the Syrian revolution’s last stand. A rural province known for its olive groves and wheat fields, some of Idlib’s towns and villages were among the first to protest the Assad regime in 2011. But uprisings across the country soon forced the dictator to divert his security forces to major urban centers, leaving Idlib a comparative bastion of freedom.

After Russian airpower turned the bloody war in Assad’s favor in 2015, and as rebel cities fell one by one to the regime, Idlib took on another function. Under a reconciliation mechanism guaranteed by Russia, surrendered fighters and their families were given the choice of either assimilating or bussing to the province. Fearful of violent recriminations or being forced to fight for the regime they had opposed, many rebels opted to leave. As Assad consolidated his hold on Syria, arrivals from conflict zones like eastern Ghouta and Aleppo swelled Idlib’s population from 1 million to an estimated 3 million before the most recent offensive.

Assad’s December escalation forced many of them to uproot again. “Some families have fled up to 14 times, moving from village to village,” Nada Farra, who sits on the steering committee of the Syrian Women Humanitarian Network, tells TIME at the Gaziantep offices of Jana Watan, a multi-platform aid agency that like other members of the network has devoted all of its efforts to emergency relief in recent weeks.

With three out of four of Idlib province’s schools now occupied by the displaced, Farra says, those fleeing violence have holed up in half-completed buildings. In many instances, multiple families share a single tent, while others sleep under trees with the prospect of a tent “a dream,” she says. The loss of privacy presents “a huge problem for women and girls in Syria,” whose safety and dignity are compromised, Farra says. According to the U.N., the situation has contributed to a number of reported rape cases.

A 2018 ceasefire agreed between Russia and Turkey, which supports rebel groups in Idlib, was meant to bring a semblance of stability. Under the agreement, the province was designated a “de-escalation zone.” But that was soon complicated by Islamist militant group Hayat Tahrir al-Sham (HTS), which staged a de-facto takeover of Idlib’s security in early 2019.

The dominance of HTS—a successor to the jihadist group and onetime Al Qaeda ally the Al Nusra Front—presented Assad with a pretext to escalate military operations, while checking the efforts of international aid agencies afraid of being perceived to be financing terrorists. Despite several rounds of Russian-Turkey talks, that ceasefire has collapsed completely.

A January U.N. Security Council report estimated that HTS had a fighting force of between 12,000 and 15,000. While other jihadist groups are also present, their numbers remain a fraction of Idlib’s civilian population. “We understand the risk posed by HTS, but at the same time, civilians should not be punished,” says Al Sham CEO Othman. “Displacing 900,000 people is not “‘collateral damage.’”

Although President Trump said in a Feb. 15 phone call with his Turkish counterpart Recep Tayyip Erdogan that Russia should halt its support for regime “atrocities”, the White House has been near silent on the bloodbath in Idlib, where human rights groups have documented the death of nearly 2,000 civilians in the past year.

“The Trump Administration has publicly assured the Russians and the Assad regime that they will not have to deal with U.S. military strikes aimed at protecting civilians from mass homicide and state terror,” Frederic Hof, who advised President Barack Obama on Syria told TIME recently. “For people like Vladimir Putin and Bashar al-Assad, this is a bright green light to do as they wish.”

In effect, that leaves Turkey the sole bulwark against the Syrian government advance. Since Feb. 1, Ankara has poured 1,240 Turkish military vehicles and around 5,000 soldiers over the border, according to the U.K. based Syrian Observatory for Human Rights, and Erdogan has threatened to drive Syrian troops from Idlib unless they withdraw by the end of the month. On Feb. 24, Turkey-backed forces retook one strategic northwest Syrian town in a battle with regime allied fighters.

But Turkey is unwilling to open its borders to a fresh influx of refugees from Idlib. In a Feb. 19 call with journalists, mother of two Joumane Mohamed, who was displaced from her home in southern Idlib, told TIME the situation at the border had become so desperate many were considering attempting to breach the barrier, with a view to eventually crossing into Europe. “That’s our last solution. That’s our last lifeboat,” said Mohamed, who gave a pseudonym for fear of her safety.

A displaced woman carries a box of humanitarian aid supplied by an NGO in Idlib, Syria, on Feb. 19, 2020.
Burak Kara—Getty Images

The pattern of Russian airpower indiscriminately targeting civilians before regime ground forces advance is well documented. But attacks on schools, hospitals, and markets have stepped up markedly in recent weeks. Ten hospitals and 19 schools have either been directly hit or affected by airstrikes since the beginning of the year, according to the U.N. Facilities targeted include those under the U.N.’s so-called “deconfliction mechanism,” a system that provides warring parties the coordinates of humanitarian facilities like hospitals that international law exempts from attack.

In Syria, aid groups say that the mechanism has failed. “There is no area that is safe, whether it’s deconflicted, a civilian area, humanitarian project, or funded by the U.N.,” says Yakzan Shishakly, co-founder of the Maram Foundation, a humanitarian organization operating in northwest Syria. On Feb. 8., regime airstrikes hit an already evacuated Maram Foundation reception center that was under the deconfliction mechanism.

Like Al Sham Humanitarian Foundation’s Othman, Shishakly and his colleagues are now working on an evacuation plan for a displaced people’s camp Maram manages about 10 miles north of Idlib city. But as the “killing machine” approaches, it is not clear where the camp’s 4,000 residents—or those in makeshift settlements nearby—can be relocated.

For now, the plan is to begin evacuating people, tents and other mobile infrastructure should regime forces advance on two villages near to the camp. But with nowhere in Syria safe and with Turkey refusing to allow refugees across the border, it’s not clear what comes next. “We have our point A but we don’t have a Z,” Shishakly says.

It’s a situation he says is replicated across Idlib, where roads are snarled with human traffic as areas of free movement shrink, and journeys that before could be completed in minutes now take hours. “If you stop anyone on the road and ask where they are going: they don’t know.” 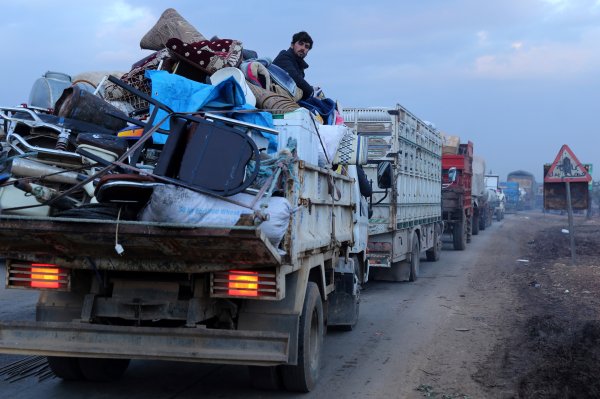 Syrian Violence Stokes Fears of a ‘Bloodbath’
Next Up: Editor's Pick