China Said It Was Easing Wuhan's Coronavirus Lockdown, Then Backtracked

Government workers and volunteers guard at the entrance to a residential block locked down to curb the COVID epidemic in Wuhan in central China's Hubei province Friday, Feb. 21, 2020.
Feature China/Barcroft Media/Getty Images
By Bloomberg

China said an announcement that the quarantine of Wuhan would be eased was prematurely issued without approval from top officials. The lockdown of the Chinese city where the novel coronavirus emerged would remain fully in place, it said.

The abrupt about-turn within a matter of hours added to the confusion emanating from the devastated city of 11 million which has been sealed off since Jan. 23.

Hubei province — where Wuhan is located — has also adjusted its official count of infected people multiple times in recent weeks, fueling mistrust of the official narrative emerging from the epicenter of an outbreak that has infected almost 80,000 people and killed over 2,600.

On Monday, a city government statement on Weibo said that non-residents would now be able to travel out of Wuhan as long as they are healthy and not quarantined. It was the first move to ease a lockdown over the 60 million Hubei population that’s been in place for a month, and seen as a sign that China believed that the outbreak is until control.

But hours later, the statement was deleted off Weibo as well as state media sites without explanation. Shortly after, a new statement was issued on the city government’s Weibo account saying that the earlier announcement was “unauthorized” and that there would be no change to the quarantine.

Reached on the phone, a spokeswoman for the Wuhan Health Commission said she noticed the retraction but had no further information on the situation. The Hubei Health Commission did not respond to phone calls seeking clarification.

The shifting public stance is the second flip-flop from Hubei’s leadership in a week. Last week, after some Hubei cities had deleted cases from their official count of infections, party secretary Ying Yong ordered them to be added back. The cities said they had made the deletions after review by medical professionals but Ying lambasted them for undermining public trust.

The conflicting messages from Hubei’s officials has added to public anger across China over the government’s delayed initial response to the outbreak and its lack of transparency. While the province’s top leader was sacked and replaced earlier this month with Ying, a close aide to Chinese president Xi Jinping, the disarray has continued.

The about-turn likely reflects the dilemma facing China of how to re-start its ailing economy without prematurely lifting the draconian measures that’s managed to halt the virus’ spread.

China is pushing factories to resume production, although the return of workers en masse to factory floors could lead to more infections. The outbreak has been tentatively contained but hasn’t reached a turning point yet, said state TV agency China Central Television Friday.

The contagion continues to spread in Asia and parts of Europe, stoking fears of a pandemic. South Korea, China’s neighbor and the next hardest-hit country, has confirmed more than 763 cases and seven deaths. 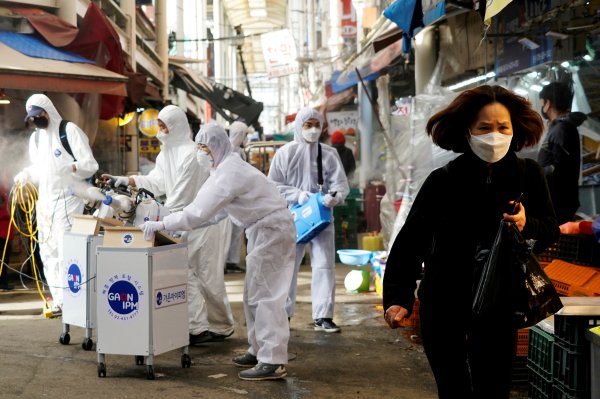 How South Korea’s Coronavirus Outbreak Got out of Control
Next Up: Editor's Pick