New Jersey Gov. Phil Murphy announced on Twitter Saturday that he will undergo surgery to remove a tumor from his left kidney. There is a 90% chance that the tumor is cancerous, although doctors will not be able to determine whether it is malignant until after the surgery, Murphy’s office said, according to NJ.com.

Murphy, who is 62, told the publication in an interview that his doctors are “optimistic” that they will be able to remove the entire tumor during the surgery scheduled for early March. “The prognosis is very good and I’m profoundly grateful to my doctors for detecting the tumor early,” Murphy wrote on Twitter on Saturday.

He said that he feels “incredibly fortunate” that tumor was detected at an early stage, and said he does not expect to undergo chemotherapy or radiation. He will likely stay in the hospital for two or three days, and will recover at home for a few weeks, Murphy said.

The Democratic governor, who has advocated for policies intended to improve healthcare access since he was sworn in as governor in 2018, acknowledged that he is not the only person to face the threat of cancer.

“Over 50,000 New Jerseyans will hear the words ‘you have cancer’ this year, so I’m far from alone here. It’s a situation that far too many families find themselves in. That’s why we’re fighting for them each and every day,” Murphy wrote on Twitter. He added that healthcare is a “right” and referred to high healthcare costs as a “national emergency.”

“@GovMurphy is a fighter and I know this is one he will win. Wishing him a speedy recovery. My thoughts are with him, the First Lady, and their family,” Booker wrote. 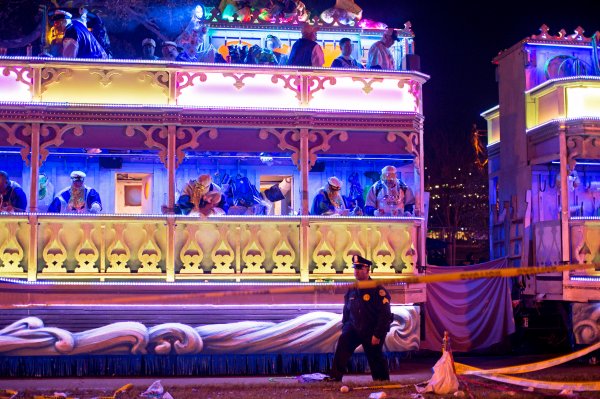 2 People Killed by Mardi Gras Floats
Next Up: Editor's Pick