"It’s fine to have your world shook. The pieces may fall back in the end ... and they may not." —Brian Greene, theoretical physicist
Mary Kang for TIME
Ideas
By Jeffrey Kluger
Jeffrey Kluger is Editor at Large for TIME magazine and the author of ten books, including Apollo 13, Apollo 8 and two novels for young adults. He has written more than 40 cover stories for TIME on topics ranging from space to human behavior to climate to medicine. Along with others at TIME, Kluger is an Emmy nominee for the web series A Year in Space.

If you’re feeling all dreamy about the universe, here’s a pro tip: don’t tell Brian Greene. That guy can chill your cosmic buzz fast. I recently swung by the office of the Columbia University theoretical physicist full of happy, giddy questions and came away pretty much empty. Is there such a thing as a natural moral order? I wondered. Not in this universe, there isn’t. What about a purpose to the universe, then–the reason the whole 13.8 billion-year-old shebang with its hundreds of billions of galaxies and trillions of planets happened in the first place? Nope, Greene says, no such purpose, adding, “And that’s O.K.” Maybe for him it is.

Surely, though, Greene will grant the existence of free will–that first item on the wish list of every freshman-year philosophy student who ever lived. Sorry, not a chance.

But here’s the thing about Greene, founder of the World Science Festival; host of multiple TV series on PBS; and the author of five books, including the blockbuster The Elegant Universe and the just-released Until the End of Time: he says it all with such ebullience, such ingenuous enthusiasm, that if he told you the whole cold, amoral universe was ending tomorrow you’d roll with it the way he would–as just one more dramatic chapter in an extraordinary tale in which we all have a precious if fleeting role. That’s not to say everyone embraces his cosmic view so easily.

“I’ll be frank,” Greene says. “I have some students come in crying. And they say, ‘This is kind of shaking my world up,’ and I say to them, ‘That’s not a bad thing. It’s fine to have your world shook. The pieces may fall back in the end to where you were, and they may not.'”

On the day I saw him, the man who has made himself the master of some of the most abstruse aspects of physics–superstring theory, spatial topography–was instead being mastered by one of the more basic ones: gravity. He was struggling about on crutches, the result of two ruptured spinal disks, which can give out over time whether or not you’re the kind of person who can explain the attraction between the mass of the earth and the mass of your back.

When he makes his way from desk to couch, he drops down gratefully. Behind him is a whiteboard with a storm of equations written on it. The numbers and glyphs frame his face in a perfect metaphor for the impossibly complex ideas that play out in his head, then somehow emerge comprehensibly and coherently on the page.

It’s a busy time for Greene. His World Science Festival will begin its 13th season in May in New York City and its fifth year in its satellite venue in Brisbane, Australia, in March. The Down Under version attracted a total of 700,000 visitors in its first four years. The New York edition has drawn a cumulative 2 million people and more than 40 million online views of its content.

Greene, 57, is also preparing for a promotional tour for his new book, and keeps up a full schedule of teaching, holding office hours and advising graduate students. During our conversation, he mentioned that he was booked to give an evening talk on superstring theory to a gathering of the university’s Society of Physics Students. It’s a Friday night, a party night, but for the students and Greene, talking superstrings is a party.

“I’ve found that the theoretical physicists I’ve spent the most time with are the ones who are just enthralled by the ideas and the minutiae of an equation working out,” he says. “The only difference I have seen relative to my colleagues is I’ve never found pure research to be enough. I’ve always felt like the world is so big and rich that I need to engage with it in different ways. And that can be the books, it can be the TV shows.”

Greene comes by his love of performance rightly. His father was a vaudeville entertainer as well as a composer and voice coach. But Greene’s own passion was math and science and then big science–the kind that seduces you with questions that both demand and defy answers, that can cross the line from science to something else entirely. Here, too, a close family member helped.

“My brother is a Hare Krishna devotee,” Greene says. “He’s 13 years older than I am. When I was little and getting interested in math and physics, he’d say, ‘What are you learning?’ I’d describe the Big Bang, and he’d pull out the Vedas and read to me from them. It was a very interesting back-and-forth over the decades between the scientific pathway toward a certain kind of truth and the spiritual, religious pathway to a certain kind of truth.”

That tension plays out elegantly in Greene’s new book, and to make sure no one misses the dialectic, the chapter names make it clear: “Duration and Impermanence,” “Origins and Entropy,” “Particles and Consciousness.” Greene takes one of his most powerful whacks at entropy, attacking the nettlesome business of the second law of thermodynamics–the broad truth that all systems tend to disorder, which is often used to challenge the truth of evolution itself: that profoundly complex order can emerge from the chaos.

“I resolve that tension in Chapter 3,” Greene says, a boast that could pass as arrogant except that, well, he does resolve the tension in Chapter 3. “It relies on the force of gravity. Without gravity, everything just spreads out, diffuses, and that’s all there would be. But gravity has this wonderful capacity as a universally inward-pulling force which can undertake the following magic trick: it can pull things together, making it more orderly here, at the expense of releasing heat that makes it more disorderly out there. I call it ‘the entropic two-step.'”

There’s a lot of satisfaction in such neat solutions to head-cracking problems. But there is an equivalent neatness to the ostensibly dispiriting conclusions Greene reaches in his books and in his research: that unhappy business of a cold universe, an insentient universe, of the individual as just a quantum contraption, behaving as a product not of choice but of probabilities and randomness. It’s where the free-will thing comes in: the universe is guided by quantum probabilities, and your “choices” are simply a part of that, the way a local breeze is part of the global weather system.

“My feeling is that the reductionist, materialist, physicalist approach to the world is the right one,” Greene says. “There isn’t anything else; these grand mysteries will evaporate over time.” But despite such empirical bravado, Greene says more too–and whether he likes it or not, it’s not reductionist, and if it’s written in a book like Until the End of Time, it could be written in the Vedas as well. 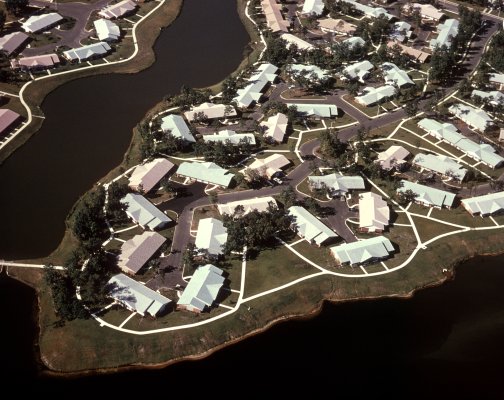 Why 1970s Suburban Homeowners Were Deemed a 'Profit-Making Cartel'
Next Up: Editor's Pick