In a promotional video featuring Japanese tennis superstar Naomi Osaka, as well as fans of different nationalities, the organizing committee for the Tokyo 2020 Olympic and Paralympic Games revealed on Feb. 17 the event’s official motto: United by Emotion.

Yet if there’s one emotion linking the world today, it might be fear. The COVID-19 outbreak shows little sign of weakening. As of Feb. 19, the disease has infected more than 75,000, killed 2,014 and prompted over 50 countries and territories to close their borders to arrivals from China. The “devil” virus, as Chinese President Xi Jinping has called it, has already surpassed the combined death toll of SARS and MERS and lies on the cusp of becoming a pandemic that spreads around the globe. The next few weeks will determine whether containment efforts can prevent COVID-19 becoming the “black swan event” that Alibaba CEO Daniel Zhang has warned may derail the global economy.

The economic repercussions already look severe. According to analysis by research firm Capital Economics, COVID-19 will cost the world economy over $280 billion in the first quarter of this year, meaning that global GDP will not grow from one quarter to the next for the first time since 2009. China’s growth is expected to slow to 4.5% over the same period. Some 5 million companies have Chinese suppliers, according to data company Dun & Bradstreet, and all are under threat from slashed manufacturing capacity.

Korean automaker Hyundai has shut its huge factory in Ulsan due to a shortage of parts. Apple has told investors it will fail to meet quarterly revenue targets and warned of global “iPhone supply shortages” from the shutting of Chinese factories. The slowdown may also undermine U.S. plans to massively boost exports of agricultural goods, energy and services to China, hampering any potential recovery in farming communities and the Rust Belt.

Travel in and around the region has ebbed significantly. Some 21 airlines have cancelled all flights to mainland China. Hong Kong-based Cathay Pacific has cut 40% of network capacity and asked 27,000 employees to take unpaid leave to help it stay afloat. Events from the Hong Kong Rugby Sevens to K-Pop concerts have been cancelled or postponed.

Now, speculation is mounting about one of the year’s biggest events due to take place directly in the orbit of the outbreak—the 2020 Olympic Games, which are to be held in Tokyo beginning July 24. Japan has the second highest rate of COVID-19 infections after China, with 695 people testing positive for the virus, most of them on a cruise ship docked at the city of Yokohama. Yet the Olympics torch relay is due to begin next month and traverse to all of Japan’s 47 prefectures over 121 days, coinciding with its popular cherry blossom bloom.

The chill on visitor numbers across Asia already risk making the Games a subdued affair. Japan received 9.6 million visitors from China in 2019, accounting for a third of foreign tourist expenditure, but Chinese arrivals have virtually ceased since the outbreak. According to Japanese public broadcaster NHK, Tokyo 2020 organizing committee chief executive Toshiro Muto said on Feb.5 he was “extremely worried that the spread of the infectious disease could throw cold water on the momentum toward the Games.”

Officials have since closed ranks as speculation about the Games has increased. Organizing committee president Yoshiro Mori insisted Feb. 13, “we are not considering a cancelation or postponement of the Games—let me make that clear.” As he spoke, some 3,700 people remained quarantined on the Diamond Princess cruise liner, anchored less than two miles from Yokohama Baseball stadium, a key Tokyo 2020 venue. (Those uninfected were scheduled for release beginning Feb. 19.)

Four days later, the city canceled the Tokyo Marathon due to take place on March 1 for all except elite runners. Dick Pound, a former Olympian swimmer and member of the International Olympic Committee, told TIME the organisation was monitoring the situation closely but said no one was talking about relocation or cancelation with five months still to go. “If there’s a legitimate pandemic that is potentially a lot more lethal than normal illnesses of flu, that’s when you need to start thinking about it. But not at this stage.”

Mori’s confidence is in line with projections that COVID-19 will fade during warmer and more humid summer months, as SARS did in 2003. But it’s still not clear why SARS declined as temperatures rose. Some coronavirus strains—like MERS—thrive in the heat, says Prof. Michael Osterholm, an epidemiologist at the University of Minnesota. The theory of COVID-19’s summer regress is simply “based on wishful thinking,” he says. “There is no data to support it.”

It’s hard to overstate the economic impact on Japan were the Olympics forced to be canceled or relocated. The investment surrounding the event is staggering; the Games are set to cost $25 billion, according to latest predictions, nearly four times the original estimate. According to hospitality research firm CBRE Hotels, 80,000 hotel rooms were forecast to open across Japan’s nine major cities between 2019 and 2021. Tokyo’s Okura hotel reopened in September after a $1 billion renovation. In May, national carrier Japan Airlines is due to launch a low cost subsidiary, Zipair Tokyo, at a cost of around $200 million, to meet increased demand surrounding the Olympics. It will be based at Tokyo Narita International Airport, which is currently undergoing an expansion to nearly double capacity. (Tokyo’s other main airport, Haneda, is also due to boost capacity by 70%.)

The coronavirus is already keeping international visitors away beyond China. Capital Economics research suggests tourism arrivals in Japan will fall by 40% this quarter due to COVID-19, knocking off 0.4 percentage points from growth. The U.N.’s International Civil Aviation Organization forecasts that Japan could lose $1.29 billion in tourism revenue over the same period. Koichiro Takahara, CEO of Tokyo-based ride-sharing app nearMe, says he fears the Olympics could get cancelled if the outbreak worsens. That, he says, “would have a big impact on my business, so I am keeping my fingers crossed.”

It would also impose a political cost on Japan’s Prime Minister Shinzo Abe. Already, his insistence during the bidding process that radiation from the 2011 Fukushima Daiichi Nuclear Power Plant meltdown would be tackled has been called out after Greenpeace found radiation hotspots in December near where the Olympic torch relay will pass. Similar assurances that COVID-19 will not disrupt the Games will be treated with skepticism, says Jules Boykoff, a politics professor at Pacific University, Oregon who studies the Olympics and played soccer for Team USA. “For many, when they hear Abe and other officials saying that COVID-19 will not affect the Olympics, they hear the unmistakable ring of previous empty promises.”

But it’s unclear what a Plan B might look like. Simon Chadwick, professor of the Eurasian Sport Industry at France’s Emlyon business School, suggests a networked event held across different countries is a more likely alternative. (The 2020 UEFA European Soccer Championships and 2022 Commonwealth Games are slated for such a format.) Yet there will be considerable resistance from sponsors and broadcasters who have already ploughed vast resources into securing rights deals and promotional activities. NBC alone spent $1.4 billion on broadcasting rights for Tokyo 2020. In this regard, both host and business interests will be furiously resisting any deviation. “The Japanese government is surely lobbying the IOC hard as it seeks to protect its multitude of investments,” says Chadwick.

That might explain an apparent unwillingness to address the uncertainty. Asked what contingency plans were in place for moving or postponing the Games, the Tokyo Metropolitan Government told TIME, “We cannot provide a definitive answer to a hypothetical situation.” Yet as the virus spreads its tendrils further into the Asia region, the risks are only becoming more tangible. 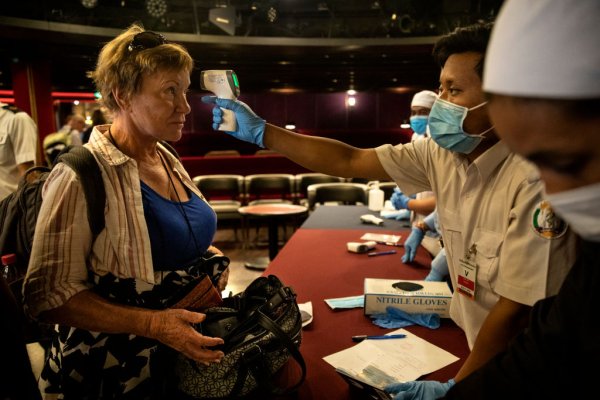 Why It May Be Impossible to Stop Every Traveler With Coronavirus
Next Up: Editor's Pick