Abraham Lincoln Healed a Divided Nation. We Should Heed His Words Today.

Abraham Lincoln (1809-1865), the sixteenth President of the United States.
Corbis via Getty Images
Ideas
By Edward Achorn
Achorn is the author of Every Drop of Blood: The Momentous Second Inauguration of Abraham Lincoln, which will be published by Atlantic Monthly Press on March 3.

Abraham Lincoln repeatedly tops polls as our greatest and most revered president. But few people thought so on March 4, 1865, when he took the oath of office for the second time.

On that day, America was still mired in the terrible war that the Republicans had been determined to wage. The refusal of Southern states to accept his election in 1860—and Lincoln’s stubborn insistence that they do so, lest the American system of representative government fall apart—had cost some 750,000 lives by early 1865. Those who think the ferocity of today’s partisanship is unprecedented would find the record of history sobering.

Lincoln had survived reelection in November 1864, but in early 1865, even as the North steadily dismantled the South’s ability to fight, Lincoln was getting it from all sides.

Many liberal Republicans found Lincoln weak and vacillating, too prone to calibrate his actions to the faltering pace of public opinion. They feared that this tendency would work against punishing the South’s establishment and risk not extending full civil rights to African-Americans, which they saw as the ultimate purpose of the war.

Frederick Douglass was among those who believed Lincoln had moved too slowly against slavery. “When there was any shadow of a hope that a man of a more decided anti-slavery conviction and policy could be elected, I was not for Mr. Lincoln,” Douglass wrote.

Northern Democrats, meanwhile, argued that Lincoln had done permanent damage to the nation and its Constitution with what they saw as his incompetent management of a disastrously prolonged war, his jailing of newspaper editors and other enemies of the administration, his arming of former slaves , and his massive expansion of the powers of the federal government.

Many from both parties, and the South, found Lincoln’s smutty frontier jokes and cackling enjoyment of lowbrow humor grotesquely unpresidential—never mind his uncombable hair and tendency to throw one leg over an arm of his chair.

In the capital of the Confederacy, the Richmond Daily Dispatch found it appalling that the people of the supposedly civilized North had reelected “a vulgar tyrant . . . whose career has been one of unlimited and unmitigated disaster; whose personal qualities are those of a low buffoon, and whose most noteworthy conversation is a medley of profane jests and obscene anecdotes—a creature who has squandered the lives of millions without remorse and without even the decency of pretending to feel for their misfortunes; who still cries for blood and for money in the pursuit of his atrocious designs.”

Healing a nation consumed by such hatred was a task as monumental as destroying the South’s resistance to Republican majority rule.

How Lincoln went about it is fascinating. He used his second inaugural address in a manner that would seem entirely alien to other politicians, including many today.

Lincoln did not try to elevate his popularity by boasting of his success in breaking the South. Nor did he denounce his enemies—even in the slaveholding states—as his moral inferiors. In sharp contrast to typical politicians, he did not insult his political opponents or accuse them of despicable, deplorable, cruel, and unpatriotic motives. He even eschewed the opportunity to wave the flag.

Rather, in a five-minute speech of about 700 words, short enough to run in a single column of a newspaper, he argued that all Americans—North and South—shared culpability for the unimaginable horrors the nation had endured. This war of unexpected duration and ferocity, he posited, may have been God’s judgment on all of America for the evil of slavery.

In overwhelmingly Christian America, North and South prayed to the same God, and both sides tended to interpret the results of the war’s ebb and flow as evidence of God’s will. Southerners had difficulty understanding how God could support the North’s “cruel, unjust and wicked war of invasion” of states that merely wished to form their own nation. In the North, such preachers as Henry Ward Beecher denounced “the ambitious, educated, plotting leaders of the South” and promised that God would punish them severely for shedding an “ocean of blood.”

Lincoln was almost alone in seeing the war’s suffering as a verdict on both sides. Perhaps it might be deemed an act of God’s justice, he argued, even if all the wealth piled up by 250 years of “unrequited toil” by the enslaved should be sunk into the war, and even if “every drop of blood drawn with the lash, shall be paid by another drawn with the sword.”

Lincoln’s most resonant line was his plea to Americans to finish the war and seek a lasting peace, “With malice toward none, with charity for all.” His refusal to condemn the South alone gave that phrase great resonance, particularly after his assassination, when he became a hallowed martyr to the cause of healing the nation.

Few politicians today seem to be following his example. Lincoln, with his rare ability to step outside of the emotions that we all feel when we are attacked, believed that harsh words and acts of revenge rarely pay off; that we are all flawed human beings, all bringing our own motives and complicated understanding of the world to politics.

But, without attacking others, he managed to implant in that great speech an interpretation of the war that has endured—that, for all its evils and horrors, the Civil War was ultimately an act of justice because it destroyed the curse of slavery.

Frederick Douglass, who had long argued that the war’s meaning was defeating slavery, stood in the mud outside the Capitol, listening to Lincoln deliver his speech. That night, despite being forcibly removed by guards because he was a black man, Douglass managed to get into the White House to shake Lincoln’s hand at a public reception.

“Here comes my friend Douglass,” Lincoln said, and he urged his former political foe to tell him what he thought of the speech.

“Mr. Lincoln, that was a sacred effort,” Douglass said. 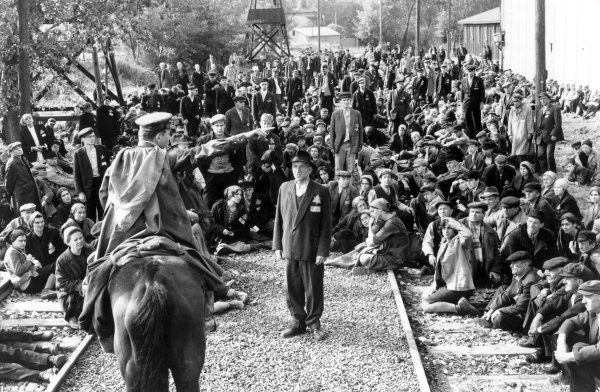 'You Shall Never Be a Bystander.' How We Learn About the Holocaust When the Last Survivors Are Gone
Next Up: Editor's Pick