'Release the Blanket!' Everyone Wants to Wrap Themselves Up in This Female Octopus's Predator-Deflecting Rainbow Blanket

A stunning female blanket octopus has swum into our lives to become a cephalopod-celebrity in just one night.

In the ocean, a.k.a. deep space, threats abound, but not to worry. A boundary-setting survival icon octopus is charming the internet thanks to this video of her releasing her very own blanket to protect herself against predators.

The creature is sweeping social media with a blanket of iridescent shades of deep neon purple, bright orange, magenta and blue. It’s enveloping a lot of people.

Filmed by the NAD Lembeh Resort in Lembeh Strait, Indonesia, and shared by Open Ocean Exploration, the video is absolutely mesmerizing stuff, and it’s been viewed nearly 800,000 times.

And they shared it with this comforting caption

“The world can be rough. Politics, viruses, natural disasters. So here is a female blanket octopus to remind you that this planet is still a pretty amazing place.

“Blanket octopuses get their name from sheets of webbing that stretch between some of their arms. When threatened, they stretch their arms out, creating a blanket-like silhouette meant to frighten would-be attackers away,” according to the National Geographic.

Rainbow octopuses are rare, but our fascination with them is nothing new.

A scuba diver caught up with a pair of the colorful octopuses off the coast of the Philippines in June last year, according to USA Today.

This year, the internet fell deeply in love with Billy Porter’s confrontation-repellant blue headpiece at the 2020 Grammys as the ultimate example of excellent self-protection.

We’re not saying that this newly viral enlightened majestic being ascending through the sea has unseated Billy Porter’s hat. That would be crazy. But with her brightly colorful, luminous blanket as practical as it is glorious, she’s definitely in the same zone.

“Name me another animal with this much drama. This much fashion. This much razzle dazzle. YOU CAN’T,” one Twitter user wrote.

See the best reactions to the female blanket octopus below. 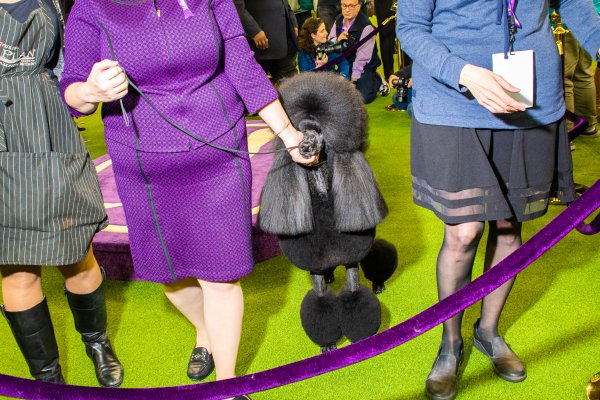 This Is the Winner of the 2020 Westminster Dog Show
Next Up: Editor's Pick