Jordan Fisher and Lana Condor in Netflix's 'To All The Boys: P.S. I Still Love You'
Bettina Strauss—Netflix
By Rachel E. Greenspan

There are many reasons you might be familiar with Jordan Fisher. Gen Z-ers might remember him from Disney Channel’s Liv and Maddie and Teen Beach Movie. Broadway fans know him for his role as John Laurens/Philip Hamilton in Lin-Manuel Miranda‘s hit musical Hamilton, and for appearing in Grease Live! and Rent: Live. Nearly two million video gamers have watched him stream Fortnite with the gaming platform Twitch, and audiences watched him sparkle and shimmy his way to victory on Dancing With the Stars in 2017.

Now, with a role in Netflix’s To All the Boys: P.S. I Still Love You as a love interest for Lara Jean Covey (Lana Condor), Fisher can add bonafide heartthrob to this growing collection of varied credits. That’s as long as viewers don’t revolt when his character, the suave and intellectual John Ambrose McClaren, steals the spotlight from Noah Centineo’s Peter Kavinsky.

When To All the Boys I’ve Loved Before hit Netflix in 2018, it quickly became a breakout among Netflix’s slate of romantic comedies like Set It Up and The Kissing Booth. Though the streamer is typically tight-lipped about its metrics, Netflix cited To All the Boys as one of its “most viewed original films ever with strong repeat viewing,” according to Variety. Lara Jean and Peter’s budding romance is at the heart of the film, which is based on Jenny Han’s YA novels of the same name. The two enter into a faux relationship to make others jealous — specifically, Peter’s ex and Lara Jean’s older sister’s boyfriend. Shock of all shocks, the “fake” relationship eventually gives way to something real, and the movie’s swoon-worthy, knee-bending final kiss is one for the rom-com books.

To All the Boys 2, out Feb. 12 ahead of Valentine’s Day, has the tough job of convincing viewers that Peter might not actually be perfect. In an early scene in which the couple has their first date at an upscale restaurant, Peter explains that fancy place settings have two forks in case you drop one. He then knocks one of his forks onto the ground, the wrong move at a moment when Lara Jean is earnestly excited about her first-ever real date. Cringe.

This establishes an opportunity for Fisher’s John Ambrose to swoop in. In an unexplained coincidence, John Ambrose — one of Lara Jean’s former crushes who mistakenly received a private love letter in the first film — starts volunteering with her at a nursing home, after Peter blew off his girlfriend’s volunteer work to go elsewhere with his jock friends. As it turns out, Lara Jean’s unrequited crush on her childhood best friend wasn’t unrequited at all. Though Peter may be a popular athlete with charm to spare, John Ambrose loves Model U.N., hanging out with elderly folks and playing the piano. It’s the perfect love story…or isn’t it?

Fisher, 25, has a certain level of respect for John Ambrose, whom he sees as a different kind of prospect for Lara Jean. “Peter Kavinsky in high school and college is pretty great, but John Ambrose is the marrying type,” the actor, who is himself engaged to his longtime childhood friend, told TIME in an email.

Viewers seemed to agree with that sentiment. Within hours of the film’s release, Twitter was ablaze with John Ambrose fever.

As fans inevitably debate the pros and cons of the great John Ambrose vs. Peter Kavinsky match-up, Fisher will be focusing his attention on another love story unfolding in front of a live audience, in his third week starring in the Broadway blockbuster Dear Evan Hansen at New York’s Music Box Theatre.

‘The whole idea as an actor is that you disappear’

In Dear Evan Hansen, Fisher plays an extremely anxious high schooler who gets caught in a web of lies that threatens every relationship in his life. The show’s plot, which involves teen suicide, is devastating at times. Evan Hansen and John Ambrose are entirely dissimilar characters, as are the tones of the two projects. Fisher says that challenge is part of his passion as a performer. “That’s film and that’s Broadway and that’s acting and that’s creating. The whole idea as an actor is that you disappear,” Fisher told TIME, hours before taking the stage on Wednesday evening. “If anybody gets to see both the film and Dear Evan Hansen, yeah, it’s going to be a bit of a culture shock for them, but that’s the goal as an actor to create that separation.”

“The complexity of this boy is akin to climbing Mt. Kilimanjaro,” Fisher said of playing Evan Hansen in a press release ahead of his opening last month. His casting also makes history as he is the first person of color to headline the Tony-winning show in its titular role, which Ben Platt originated in 2015.

Fisher considers himself a ‘renaissance man’

Before his big break (or breaks, depending on whom you ask), Fisher moved to L.A. from his hometown of Birmingham, Ala., quickly earning roles on Nickelodeon’s iCarly and ABC Family’s The Secret Life of the American Teenager at 17 years old. Fisher admits that in the years since, his varying resume of work on TV, in theater and the music industry (he began releasing original music in 2014 and is featured on the Moana soundtrack) have positioned him as “renaissance man.” Just take his Twitter bio, for instance, which reads: “actor. recording artist. gamer. streamer. songwriter. lots of other things.”

That he’s a “gamer” is perhaps the most renaissance-man-like trait of them all, in a very modern sort of way. Like 2019 TIME 100 honoree Ninja, Fisher is among the most well-known faces of the rapidly growing video game streaming industry, which is essentially the gamer’s version of online influencing. He is partnered with Twitch, a live stream service that allows fans around the world to watch their favorite celebrities play, and is known to use his singing and dancing skills to his advantage online, entertaining with more than just his gaming skills. Fans pay for a monthly subscription to watch Fisher’s streams without advertisements and for some other perks.

Epic Games, which owns Fortnite, clearly noticed his wide appeal. Last month, Fortnite created a new “emote,” a dance that characters can do within the game, based on a dance he had posted on TikTok. The company also tapped him to host the first Fortnite World Cup last summer.

Though he will be plenty busy during the rest of his 16-week run on Broadway, gaming remains a huge passion and important benchmark of his career. “To me, art is art, and entertainment is entertainment, and I have crafted a world in the last 16 years of doing this where I’ve never really had to pick one thing over the other, and thankfully I love all of the things that I do,” he said.

Sitting at this curious and unique intersection of fame, Fisher said he’s enjoyed bringing together all of his interests. And the fact that all of his pursuits include people from such different backgrounds — the video gaming, musical theater and rom-com communities don’t typically overlap — is especially exciting for him. He asks: “Where video gaming is concerned, it has always incorporated art, film, acting and music, so why can’t that belong in the same space as Broadway and rom-coms?”

Fisher hopes that by refusing to pick one art form, he can pique different interests within his varying demographics of fans. “The fact that the gaming community is actually interested in what I’m doing in all my other spaces, whether it be music or Broadway or film or television, it just helps with the narrative and it’s exciting for me, especially as somebody that’s a fan of all of it, as well,” he said. 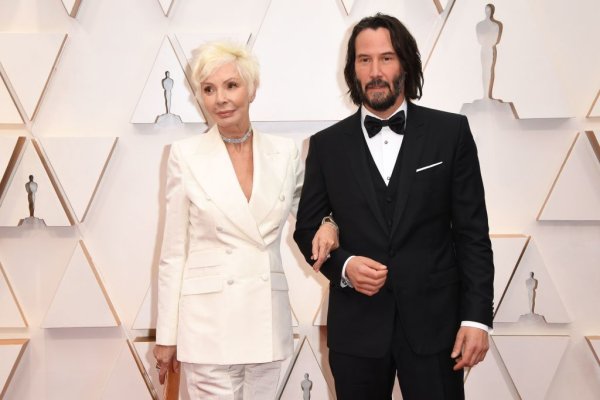 From Keanu Reeves to Saoirse Ronan, the 2020 Oscars Was a Big Night for Bringing Your Mom to the Work Function
Next Up: Editor's Pick