Everyone's Getting Swept Up in the #BroomChallenge, Because Housework Really Can Be Magic Like That

If you’ve noted videos of brooms standing up all on their own on your popping up on your social media feed like some sort of Fantasia-like sorcery, you’re not alone. The viral craze has participants trying to balance their broomsticks upright — hence the name #BroomChallenge.

A new phenomenon, this is not.

It’s simply the latest resurgence of an old myth helped along on Monday with a tweet purporting that NASA had proclaimed that Feb. 10 was the one and only day when a broom could stand up without any support thanks to the Earth’s gravitational pull.

NASA did not immediately responded to TIME’s request for comment on this gravity-defying story, but there doesn’t appear to be any evidence the agency is involved.

But they did set the record straight about this tomfoolery.

“Astronaut Alvin Drew and scientist Sarah Noble respond to the #BroomstickChallenge, showing that basic physics works every day of the year — not just February 10th,” the agency captioned a video.

Luckily, as the scientist and astronaut demonstrate, the broom challenge works any old day, simply because its center of gravity is low, according to CNN. In fact, the social media trend has swept Twitter and Facebook on multiple occasions; CNN debunked the theory that it had anything to do with planetary alignment or any special calendar day the video below.

The video also covers how people try to make similar magic with eggs at equinox time, thanks to a similar myth that has circulated for years. It’s the same deal: the yolk simply settles, hence making the egg’s center of gravity low enough to balance on a table with no strings attached. Viral eggs, y’all.

So the moment is nothing new or specific to Monday. But that didn’t stopped participants from partaking in the trend themselves — and maybe even engaging in a little housework while they’re at it, which surely makes the stunt more than worthwhile? And the results are too endearing to resist viewing. See some of the most fun attempts below.

Even Paula Abdul did a dance around her #broomchallenge broom in some festive pajamas. 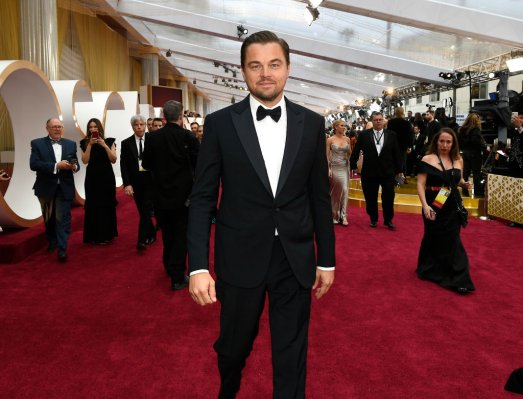 Established Awards Show Hero Leonardo DiCaprio Cooperatively Singing With Janelle Monae at the 2020 Oscars Was Everything
Next Up: Editor's Pick