What the Awkward, Endless Oscars Could Learn From Last Weekend's Other Star-Studded Awards Show

Now that the Academy Awards are consistently a slog, it’s always strange when the ceremony ends on an unexpectedly positive note. No matter which contender you were pulling for, Parasite‘s Best Picture upset Sunday night was a thrilling victory—for class-conscious art at a time of unprecedented inequality, for international cinema in a country that exports too many cultural products and imports too few, for a nonwhite cast and crew after yet another year of nominations that were #SoWhite and simply for those who enjoyed watching director Bong Joon-ho gaze with genuine delight upon his fourth Oscar of the evening. But when the telecast was finally over, half an hour late as usual, the feeling that lingered was one of vague disorientation.

The problems with major awards shows have become so obvious and so ingrained that they barely need to be enumerated. For the record, however, the 2020 Oscars presented one awkward moment after the next. In the opening production number, Janelle Monáe (good!) paid tribute to A Beautiful Day in the Neighborhood, Midsommar, Us and other movies that had been largely ignored by the Academy (weird!) and announced that “we celebrate all the women who made phenomenal films” in a year when the people in the room hadn’t seen fit to nominate any of them for the directing prize (oof!). Like Steve Martin and Chris Rock‘s subsequent tag-team monologue (dialogue?), which also made noises of discontent about the whiteness and maleness of the nominees, the performance felt like the Oscars’ attempt to distance themselves… from themselves.

The hostless ceremony devolved into a series of non sequiturs: Celebrity presenters introduced more famous celebrity presenters. Eminem showed up, randomly, to perform his 2003 Best Original Song winner “Lose Yourself.” Rebel Wilson and James Corden apologized for Cats in full Cats regalia. Elton John took the stage unannounced, for what I assume was the first time since he was playing pubs in the ’60s. Billie Eilish sang the Beatles’ “Yesterday” for the In Memoriam segment (which omitted Luke Perry, whose last film role was in Best Picture nominee Once Upon a Time… in a Hollywood, among other big names) in the night’s most transparent attempt to please both the boomers who actually watch and the Gen Z crowd that follows along on social media. Highlights, from the Bong show to the chemistry between presenters Diane Keaton and Keanu Reeves, were largely unscripted. (Next year, the Academy should try putting Brad Pitt on the payroll.) And they didn’t outweigh the spectacularly bad in-the-moment choices, such as cutting the lights midway through the Parasite crew’s culminating acceptance speech.

Every year stuff like this happens, and every year it seems more inevitable that awards shows will be irrelevant at best and offensive at worst. But it doesn’t have to be this way—as I remembered while watching the Film Independent Spirit Awards the night before the Oscars. Airing on IFC at the reasonable hour of 5 p.m. ET and running a relatively merciful two-and-a-half hours, the Spirits have been plagued by their own share of identity crises over the years. (In a superhero-mad Hollywood where plenty of Oscar hopefuls are now made on shoestring budgets and released in a limited number of theaters, what actually differentiates an “independent film”?) Yet, unlike the Oscars, they managed to convey both an abiding love of movies and a real sense of fun.

For one thing, the Spirits had the courage to hire an actual host: actor, comedian and misery-chick icon Aubrey Plaza, for the second time in a row. “This year we said, let’s find someone funny, smart, a cinephile,” Film Independent’s president, Josh Welsh, explained in 2019. “Being a great actor wouldn’t hurt.” Plaza kicked off the 2020 telecast with a hilariously unhinged skit that spoofed Renée Zellweger’s Judy, followed by a monologue that riffed on Garland’s Summer Stock showstopper “Get Happy.” Unlike Ricky Gervais at the Golden Globes, Plaza infused bracing irreverence with charm: “Jennifer Lopez,” she said, “just performed at the Super Bowl last weekend. Amazing! What did you do last weekend, Mary Kay Place? Nothing, you lazy sack of sh*t! Just kidding, you’re a national treasure. Nicolas Cage, you’re a national treasure, too. I’m sorry, I said that wrong. You were in National Treasure 2.” There’s no surer way to kill a joke then by picking it apart, so you should probably just watch.

In fact, I paused Sunday’s red carpet coverage to play both clips for a few Oscar-night guests—along with another standout scripted moment, in which Plaza brought out the Gay Men’s Choir of Los Angeles to “shine a spotlight on some of the gayest moments in… films that you might not have realized were gay.” I won’t spoil the ending, but I will say that it reduced both me and the subject of its gentle ribbing to tears of laughter. The more salient takeaway is that, while major awards shows in the social media era tend to see matters of identity as either topics to be treated with the utmost delicacy—as in the Oscars’ dutiful, repetitive self-flagellation over the nominees’ lack of diversity—or the butt of performatively un-PC jokes (Gervais’ Globes again), the Spirits found a better way. Viewers laughed with the choir’s self-deprecating quips, not at LGBTQ people.

The Oscars have a more difficult task than the Spirits, to be sure, by virtue of their wider purview, much larger audience and history as the world’s definitive annual celebration of high-minded Hollywood filmmaking. It isn’t really ABC’s fault that the Academy nominated zero women directors to Film Independent’s three. And the show’s producers can’t exactly stop Joaquin Phoenix from rambling about cow’s milk and social justice, in favor of more entertaining bits like Oscar snubbee Adam Sandler’s goofy-voiced, gatekeeper-mocking Best Lead Actor speech on Saturday. The Academy Awards could, however, find a charismatic host who cares about movies and write gags that feel playful and fresh rather than safe and obligatory. They could, in other words, actually cater to the captive audience of film fans whom the telecast is, frankly, lucky to still retain. 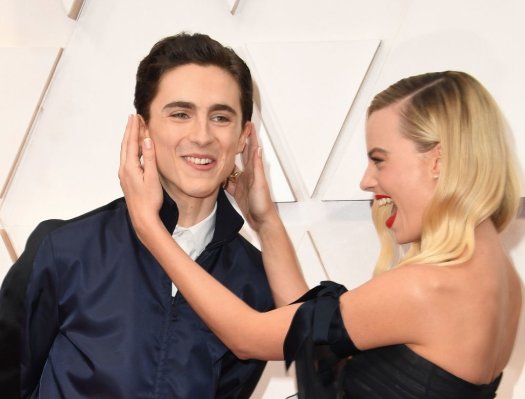