'We're Not Going to Let It Go.' Sanders Supporters Are Still Mad About Iowa

Workers clean up after the Bernie Sanders 2020 Debate Watch Party at the Ultimate Sports Academy in Manchester, N.H. on Feb. 7, 2020.
Tony Luong for TIME
By Lissandra Villa / Manchester, New Hampshire

It’s Friday night and documentary filmmaker Michael Moore is sitting in the middle of a leaky sports facility in Manchester, watching the latest 2020 Democratic presidential debate. He laughs with joy at the giant screen ahead of him, on which former Vice President Joe Biden just gave Sen. Bernie Sanders a hug because the moderator had reminded Sanders that Hillary Clinton said nobody likes him.

Moore, a top surrogate for Sanders, is among friends. He’s sitting in the front row of about 100 Sanders supporters who’ve come out to watch the debate together, facing rain, sleet and snow to cheer Sanders on. “I loved that,” Moore tells me after the debate. He also tells me about all of the personal connections he has with other Democratic candidates, including meeting Biden. “I didn’t just applaud for Bernie. If any of them said something that I thought was good and decent and best for the country, they got my applause.”

Everyone at Sanders’ official watch party on Friday is in a good mood— or mostly a good mood. They’re laughing, they’re clapping, they’re booing other candidates and eating free Ben & Jerry’s ice cream. (Ben and Jerry have both endorsed Sanders.) Their candidate just came out strong in the Iowa caucuses, and is expected to do it again when New Hampshire votes next week. Sanders won New Hampshire in 2016 by more than 20 points, handily beating out Clinton, and he’s recently been polling first in the state.

Just days out from the messy, chaotic Iowa caucuses that gave both Sanders and former South Bend, Ind. Mayor Pete Buttigieg a claim to victory, Sanders camp is feeling good about what’s ahead. But some of the debate watchers on Friday night said they also feel angry and cheated about Iowa setting a storyline that Sanders and Buttigieg were both winners in the first-to-caucus state.

Though Sanders appears to have won the popular vote in Iowa, the state delegate equivalent, which Buttigieg inched ahead on, remains unofficial. The Associated Press was unable to determine a winner.

“I really feel that Iowa was kind of stolen, really,” Christine McDonough, 59, a volunteer from Wisconsin, says during one of the debate breaks. “I think that what happened was we had the perception that Pete won … Perception is a lot, and I think Pete Buttigieg got a real boost from the perception that he was the winner of Iowa.”

Ben Calegari, 28, who returned home to New Hampshire to vote and volunteer for Sanders, said he also didn’t like how Iowa played out. “It was frustrating to see Pete come right out of the gate and say that it was a victory,” Calegari says. Narrative matters, he noted.

A guests tuned in at the Bernie Sanders 2020 Debate Watch Party; A bingo card seen at the Watch Party in Manchester, N.H. on Feb. 7.
Tony Luong for TIME

For most of this watch party, the Bernie signs that were handed out at the start of the debate sit forgotten in laps as people chat with each other, tuning in when Sanders is talking on stage. He gets several rounds of applause from his fans, but one of the loudest was when he finally went after Buttigieg.

“Unlike some of the folks up here, I don’t have 40 billionaires, Pete, contributing to my campaign, coming from the pharmaceutical industry, coming from Wall Street and all the big money interests,” Sanders said on stage. At the watch party, cheers fill the room, reaching the ceiling where nets had caught wayward softballs and baseballs.

Both candidates will likely end up with the same number of national delegates and have shown no sign of wanting to revisit Iowa’s mess. Instead, both campaigns are focused on New Hampshire, where Sanders began taking shots at Buttigieg this morning at New Hampshire’s famous Politics & Eggs breakfast in Manchester by reading headlines about Buttigieg’s donors.

And before the watch party began, Ohio state Sen. Nina Turner, one of Sanders’ national campaign co-chairs, took her own shot at Buttigieg, referencing “folks that have fundraisers in wine caves with Swarovski crystals,” to the Sanders supporters’ delight.

When I ask Moore about how he was feeling about the outcome of Iowa, which clearly left him frustrated as well, he tells me, “We’re not dropping this.” I ask him what he means, exactly, since neither candidate has asked the Iowa Democratic Party for a recanvass. “We the people who invested ourselves in this, we’re not going to let it go.”

This article has been updated to reflect the role of Ben & Jerry’s ice cream in the Sanders campaign. 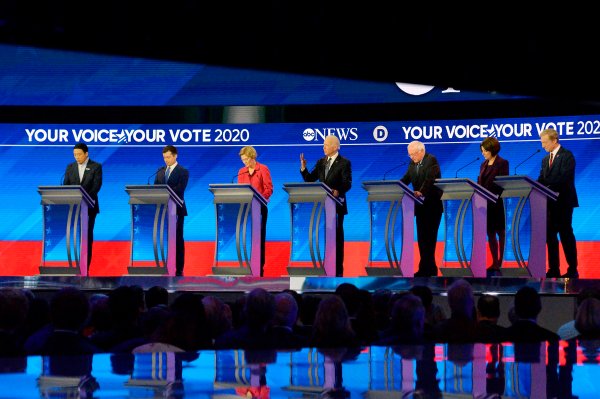