The Biggest Takeaways From the New Hampshire Democratic Debate

With voting underway for the Democratic nomination, seven of the party’s presidential candidates met for a debate—and the collective anxiety was palpable.

There’s no frontrunner, the president has just been acquitted for impeachment and voters still don’t know who won the first-in-the-nation Iowa caucuses. With rank-and-file Democrats desperate for a solid standard-bearer, the candidates rushed to argue they were the best bet to beat President Donald Trump, setting off a surreal meta-debate about that most ineffable of political qualities, “electability.”

Former Vice President Joe Biden, coming off a dismal fourth-place Iowa showing, practically conceded New Hampshire right off the bat, arguing that the first four nominating contests should be regarded as a group. Sen. Bernie Sanders, who appears to have won the most Iowa raw votes, argued that his movement could realign American politics by increasing voter turnout. And Pete Buttigieg, who’s receiving a surge of new attention since his unexpectedly strong Iowa result, positioned himself as a Washington outsider.

But it was billionaire businessman Tom Steyer who perhaps best channeled the party’s sense of angst when he proclaimed: “I don’t think there’s any question, George, that after this week, there’s a real threat that Donald Trump can get re-elected.” It’s that lurking fear more than anything that is driving the race for the nomination at this uncertain stage of the race.

Here are the key takeaways from the debate:

There are limits to what Iowans will tolerate from candidates who get even a little bit critical. Iowa is now very much in the rear-view mirror, as evidenced by Joe Biden’s toughest barbs yet in the campaign. He challenged Sanders on the cost and practicality of his Medicare for All proposal. “Bernie’s plan costs double — double — what the taxpayers are paying for every single program we spend on in the United States of America,” Biden said, standing directly to Sanders’ right. Biden took aim at Buttigieg’s decision, as Iowa neared, to challenge the record of the Obama-Biden Administration. “The politics of the past, I think, were not all that bad,” Biden said, noting his role in administering an economic recovery package that shipped millions so South Bend., Ind., and Biden’s backing of same-sex marriage before Obama.

Biden has always had it in him. In 2012, he reset the trajectory of a sinking Obama re-election bid with an aggressive if occasionally smug performance in his vice presidential debate against the GOP pick of Paul Ryan. The Obama team had prepared exhaustive research into every piece of legislation Ryan — the Republican Party’s self-anointed ideas guy — touched. Biden delivered a much-needed reboot for the team in Chicago, which was in the dumps after Obama himself botched his first debate against the Republicans’ nominee that year, Mitt Romney. Biden, too, had decent showings during his bid for the 2008 nomination, including a devastating take-down of Rudy Giuliani: “There’s only three things he mentions in a sentence — a noun, a verb, and 9/11. There’s nothing else!”

It’s that sharp tongue that Biden advisers have started to rev up now that the campaign is out of Iowa, in New Hampshire and sprinting toward famously fierce South Carolina.

Despite the otherwise testy tone, one moment of comity rose through. Asked if Democrats should nominate Biden, given the ongoing Republican interest in his son’s business dealings, Buttigieg did not take the bait. “We are not going to let them change the subject. This is not about Hunter Biden or Vice President Biden or any Biden. This is about an abuse of power by the President,” he said to applause. “Look, the Vice President and I — and all of us — are competing, but we’ve got to draw a line here. To be the kind of President, to be the kind of human being, who would seek to turn someone against his own son, who would seek to weaponize a son against his own father, is an unbelievably dishonorable thing.” — Phlip Elliott

At first, everything was going great for Buttigieg. Fresh off a strong showing in the muddled Iowa Caucuses and surging in the polls in New Hampshire, Buttigieg started the debate in a virtuous cycle: he is a favorite punching bag of his rivals, but nearly every time his opponents attacked him, he was able to parry the response into another opportunity to push his message of unity, belonging and futurism. He talked about a “style of politics” and the need to “turn the page” from “the politics of the past.”

“The politics of the past, I think, were not all that bad,” Biden responded. “Those achievements were phenomenally important, because they met the moment,” Buttigieg responded. “But now we have to meet this moment, and this moment is different,” he said, before mentioning 21st century challenges like global health security, cybersecurity, and election security. And in the portion of the debate devoted to foreign policy and national security, Buttigieg was able to shine as the only veteran on the stage. “The vice president made the wrong decision when it came to such an important moment in our foreign policy,” he said, criticizing Biden’s vote for the Iraq war.

Buttigieg’s aptitude for talking his way out of tough spots has taken him from being a no-name mayor of South Bend, Indiana, to a top-tier presidential contender. But when confronted with the racial disparity in marijuana arrests in South Bend, Buttigieg’s eloquence hit its limit. “There is no question that systemic racism has penetrated every level of our system, and my city was not immune,” he said, before trying to change the subject to his plan to legalize marijuana nationwide. But the questioner persisted: Why did marijuana arrests increase under his watch? Buttigieg answered that his administration adopted a strategy to “target cases where there was gun violence or gang violence which was slaughtering so many in our community” and added that “these things are all connected, and that’s the point. So are all the things that need to change in order for us to prevent violence and remove the effects of systemic racism.” The answer fell flat, especially since Buttigieg has such dismal support from black voters, especially in South Carolina.

When the questioner asked Buttigieg’s opponents whether they thought his answer was satisfactory, Sen. Elizabeth Warren had a one word answer: “No.” After starting strong and dominating the debate in the first half, the silver-tongued South Bend Mayor went mostly silent. —Charlotte Alter

Warren finished third in Iowa, caught in the no-man’s land between Sanders’ liberal warriors and Buttigieg’s appeal to moderates and suburbanites. Her fate in the debate was similar: Always articulate, always prepared, she still seemed not to have a way to distinguish herself from the rest of the field. For much of the first hour, she hardly seemed present at all. Early on, Warren had an easy opportunity to differentiate herself from Sanders, something she’s been mostly loath to do in the campaign. But rather than explain the difference between her vision of capitalism and Sanders’ socialism, she batted it away—”Oh, Bernie and I have been friends for a long time”—and launched into a version of her stump speech about money being the root of all political evil.

It was a similar story when it came to health care, foreign policy, gun control and abortion: Warren gave sharp and persuasive articulations of her positions, but didn’t necessarily make the case that voters should prefer her over the other candidates. She did stand out on the question of race: asked if Buttigieg’s answer was “substantial,” she replied, flatly, “No,” and went on to make a passionate argument that racial justice must go beyond the criminal-justice system. But here again, despite having dissed Buttigieg, she didn’t directly go after his or any other candidate’s record. (Contrast that with Amy Klobuchar, who has found herself similarly overshadowed in her ideological “lane”; she stood out in the debate by scoring a number of direct hits, perhaps most notably this attack on Buttigieg: “We have a newcomer in the White House, and look where it got us. I think having some experience is a good thing.”)

Warren’s positive, substantive message is a big part of her appeal to voters, and her skill as a debater has been apparent throughout the race. But if she doesn’t find a way to distinguish herself from the field, she could find herself squeezed out. —Molly Ball

Write to Molly Ball at molly.ball@time.com, Philip Elliott at philip.elliott@time.com and Charlotte Alter at charlotte.alter@time.com. 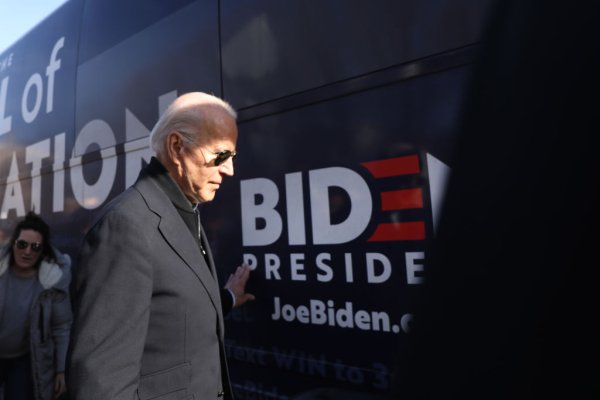 After a Rocky Start in Iowa, Joe Biden Shakes Up His Campaign
Next Up: Editor's Pick