The convoy slowed as it wound through a narrow street in Pilanji village, a cramped urban development not far from central Delhi. Inching forward behind an advance guard of police, Arvind Kejriwal, Delhi’s Chief Minister, waved from his seat on top of a converted yellow jeep. Above, through a tangle of cables and drying laundry, people on balconies waved back. Another car, following behind, blasted election slogans through speakers on its roof. It was Wednesday night, and Delhi’s election season was reaching fever pitch.

The Indian capital’s local elections, which take place on Saturday, are a crucial test for Prime Minister Narendra Modi. He won big at the national election last May but his authority has been buffeted by anti-government protests in recent months. If Modi’s Bharatiya Janata Party (BJP) can crack Delhi — a city it has not run since 1998 — it will signal that his increasingly combative approach to Hindu nationalism is still politically ascendant, even able to win fertile new territory. But if the BJP loses to Kejriwal’s incumbent Common Man’s Party, (Aam Aadmi Party, or AAP,) it would show that Modi’s recent doubling down on division hasn’t paid off.

Delhi, like much of the rest of the country, has been a hotbed of protest since December, when the BJP passed into law a controversial new piece of citizenship legislation. The law would make it easier for refugees abiding by all South Asia’s major faiths, except Islam, to gain Indian citizenship. Protesters, many of whom still gather daily at Shaheen Bagh, a working-class majority Muslim area in the capital, say the law is an affront to India’s history of secularism. They see it as the most severe example yet of Modi attempting to transform India from a secular state into a Hindu nation where other religions, especially Muslims, are second-class citizens. And protesters see Delhi’s elections as a chance to make their voices heard.

When are the Delhi elections?

The election is held on Saturday, Feb. 8. Counting will take several days, meaning the results will not be released until Wednesday, Feb. 12 at the earliest. An exit poll, the first reliable indication of how the vote is expected to go, is due out at 6.30 p.m. local time on Saturday.

Who are the main contenders?

The favorite to win the election is Kejriwal, who rose from obscurity as a tax inspector to become India’s foremost anti-corruption campaigner in the early 2010s. Although Modi’s party won the national election in 2014, Kejriwal’s AAP went on to win 67 out of the 70 seats in Delhi’s assembly a year later, the last time the vote was held here, by focusing on corruption, pollution and employment opportunities. (The BJP won the remaining three seats.)

This time round, Kejriwal has continued to run a campaign based on largely-local concerns. Meanwhile, Modi’s party is running on national ones. The BJP has not actually nominated a Chief Minister candidate to run against Kejriwal; if it wins, it will appoint one after the election. At its campaign rallies, national themes win more cheers than local ones. “The protests happening at various places in Delhi are not because of the Citizenship Amendment Act,” Yogi Adityanath, a firebrand Hindu nationalist and BJP Chief Minister of Uttar Pradesh, told BJP supporters on Feb. 2. “They are happening because these people want to prevent India from becoming a global power.”

The Congress Party, the main opposition to the BJP at the national level, is running but expected to perform poorly.

How have the protests affected the Delhi elections?

The BJP has urged voters to vote for them to show their disapproval with the Shaheen Bagh protests. At one rally, Adityanath said Kejriwal’s Delhi government was paying to feed the protesters at Shaheen Bagh with biryani.

Other campaigners have sought to capitalize on deeply-held suspicion of Pakistan, India’s nuclear-armed Muslim neighbor, a talking point regularly used by the BJP at the national level. “Pakistan will be pleased if you vote for Kejriwal,” a BJP campaigner said at one rally, according to Reuters. On Friday the Delhi president of the BJP’s youth wing, Sunil Yadav, tweeted a cartoon showing a crudely-depicted Muslim man painting a map of India with green paint, out of a can labeled with the Pakistani flag, while receiving a back massage from two AAP members, on top of a bed labeled “Shaheen Bagh.”

The election comes at a time of rising tensions too. On Feb. 1, at Shaheen Bagh, a gunman fired shots into the air. In footage of police dragging him away, he was heard saying “In our country, only Hindus will prevail.”

Perhaps conscious of the citizenship law’s political appeal among large swaths of the population, Kejriwal has for the most part stayed away from Shaheen Bagh and other protest sites, even though his party voted against the citizenship law in parliament. Instead, he is campaigning for reelection on his record of anti-corruption and education reforms.

What will the elections mean for Modi?

If Modi wins in Delhi, it would further strengthen his power as the most dominant Indian Prime Minister in a generation. It would also indicate that the divisive tack his party has taken since winning nationally in May 2019 is working.

On paper the BJP does not have much to lose, considering it’s only defending three seats in Delhi’s assembly. But Delhi is the country’s political center. If the BJP performs more poorly than expected, especially after such a dominant showing at the 2019 national elections, it might send early signals that voters are rejecting the BJP’s demonization of Muslims. 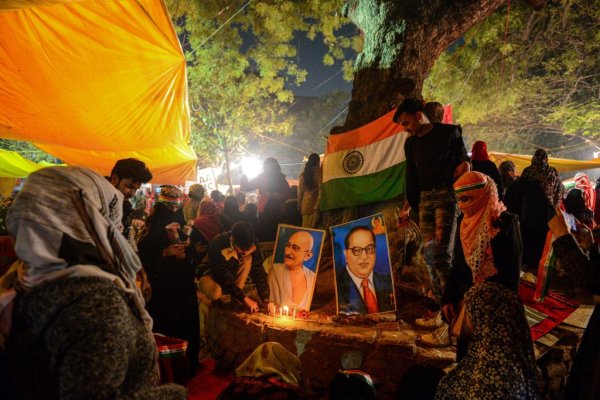 As India’s Constitution Turns 70, Opposing Sides Fight to Claim Its Author as One of Their Own
Next Up: Editor's Pick