A pair of Russian satellites are tailing a multibillion-dollar U.S. spy satellite hundreds of miles above the Earth’s surface, a top U.S. military commander tells TIME, underscoring a growing threat to America’s dominance in space-based espionage and a potentially costly new chapter in Washington’s decades-long competition with Moscow.

Gen. John “Jay” Raymond, commander of the newly minted U.S. Space Force, says the Russian spacecraft began maneuvering toward the American satellite shortly after being launched into orbit in November, at times creeping within 100 miles of it. “We view this behavior as unusual and disturbing,” Raymond says. “It has the potential to create a dangerous situation in space.” Raymond says the U.S. government has expressed concern to Moscow through diplomatic channels.

The confrontation marks the first time the U.S. military has publicly identified a direct threat to a specific American satellite by an adversary. The incident parallels Russia’s terrestrial encounters with the U.S. and its allies, including close calls between soldiers, fighter jets and warships around the world. Observers worry that space is now offering a new theater for unintentional escalation of hostilities between the long-time adversaries.

Pentagon, White House and Congressional backers, say the incident demonstrates the need for the Space Force, which President Donald Trump established in December when he signed the National Defense Authorization Act into law. It became the first new military service since the Air Force was created in 1947.

The Space Force, for which the White House is requesting $15 billion in this week’s budget proposal, represents a strategic shift from passively operating and observing satellites to actively defending them. Space warfare doctrine remains a work in progress, but Raymond has spoken about the need to mobilize Space Command against perceived threats because other nations, especially Russia and China, have become increasingly sophisticated at building arsenals of lasers, anti-satellite weapons and state-of-the-art spacecraft designed to render the U.S. deaf, mute and blind in space.

At the same time, the expansion of military operations in space harks back to another hallmark of the Cold War competition between Washington and Moscow: massive spending on perceived threats, regardless of the cost.

For those monitoring waste, fraud and abuse in the military industrial complex, the Russian maneuver and the Pentagon’s response also portends a new front in the effort to keep real and potential threats from becoming a budgetary sinkhole. The history of U.S.-Russia military competition is full of examples of perceived threats that require costly responses.

“The initial costs of setting up the Space Force are likely a small down payment on an undertaking that could cost tens of billions of dollars in the years to come,” says William D. Hartung, director of the arms and security project at the Center for International Policy. “The last thing we need is more bureaucracy at the Pentagon, but that’s exactly what the Space Force is likely to give us. Creating a separate branch of the armed forces for space also risks militarizing U.S. space policy and promoting ill-advised and dangerous projects that could involve deploying weapons in space.”

The Russian embassy did not respond to requests for comment about the allegedly threatening maneuvers by its satellites. The Kremlin has previously stated they are not weapons, but rather “inspector” spacecraft engaged in an “experiment.”

U.S. military analysts first noticed something peculiar after Russia launched its spacecraft into orbit November 26 from Plesetsk Cosmodrome aboard a Soyuz rocket. The Russian satellite had been in orbit less than two weeks when, bafflingly, it split in two. As the analysts looked closer, they suspected that a second smaller satellite was somehow “birthed” from the first one. “The way I picture it, in my mind, is like Russian nesting dolls,” Raymond says. “The second satellite came out of the first satellite.”

The maneuver was later confirmed on Dec. 6 when the TASS news agency cited Russia’s Defense Ministry saying the two had separated. “The purpose of the experiment is to continue work on assessing the technical condition of domestic satellites,” the statement said.

However, the satellites, identified as Cosmos 2542 and Cosmos 2543, appeared to be carrying out another mission. By mid-January, they were sidling near the American satellite, identified as USA 245, known to space experts as a KH-11.

The U.S. satellite, part of a reconnaissance constellation codenamed Keyhole/CRYSTAL, is operated by the National Reconnaissance Office (NRO), the secretive intelligence agency headquartered in Chantilly Va. Although the NRO refuses to comment on the large school bus-sized satellites, the KH-11’s capabilities are often compared by experts in the field to the Hubble Space Telescope. Instead of staring into the vast expanse of space, however, the satellites’ sensors and cameras are focused into the heart of foreign adversaries’ top-secret military installations

A KH-11 satellite, known as USA 224, is widely believed by analysts to have taken the image of Iran’s Imam Khomeini Space Center that President Donald Trump posted to Twitter in August. The photo was so detailed, you could make out the Farsi characters written along the edge of the launchpad. The KH-11 constellation, which consists of four satellites that maintain constant Earth observation, operate in a polar orbit above the rotating Earth, enabling them to cover its entire surface.

Russia’s curious space activities were first noted on Twitter last week by Michael Thompson, an amateur satellite tracker, who used publicly available data to speculate on what it was up to. “The relative orbit is actually pretty cleverly designed, where Cosmos 2542 can observe one side of the KH11 when both satellites first come into sunlight, and by the time they enter eclipse, it has migrated to the other side,” Thompson wrote in a series of tweets. “This is all circumstantial evidence, but there are a hell of a lot of circumstances that make it look like a known Russian inspection satellite is currently inspecting a known US spy satellite.”

Raymond says he’s concerned because Russia is demonstrating capabilities the U.S. first saw three years ago, when Moscow tested the “Russian nesting doll” technology. “In 2017, they launched a satellite, it launched another satellite,” he says. “The satellites exhibited characteristics of a weapon system when one of those satellites launched a high-speed projectile into space.”

While Raymond’s allegation couldn’t be verified, the U.S. did raise the issue in 2018, warning about Russia’s “very troubling” behavior at the U.N.’s Conference on Disarmament that year without providing specifics.

Moscow’s intent with the current mission remains unknown, but the Russian spacecraft should be capable of capturing high-resolution imagery of the American satellite as it conducts its mission, spying deep into adversaries’ territory. It’s akin to handing over a state-of-the art spy satellite to Russian scientists for forensic analysis.

Brian Weeden, a former Air Force officer and expert in space security at the Secure World Foundation, says the Russian satellites’ positioning could allow it to determine things like where the KH-11 is “pointing—and thus what ground targets its taking picture of—as well as the general operating schedule and usage.”

Further, if the Russian satellites are outfitted with electronic emissions probes, they could listen for radio frequency signals to try figure out how the KH-11 communicates and even attempt to intercept those communications, which are likely encrypted, says Todd Harrison, director of the Aerospace Security Project at the Center for Strategic and International Studies. “There are a lot of things it could be doing,” Harrison says. “They could simply be practicing on-orbit maneuvers or signaling to the United States that they have this capability.”

The Keyhole program is 44 years old and the satellites are widely known to have similar capabilities as the Hubble Telescope. The U.S., China and other nations have already shown the ability to launch spacecraft into close orbit with their own satellites. The Kremlin could be showing the U.S.—in a very obvious way—that it has joined the club.

From Raymond’s standpoint, however, maneuvering close to a foreign satellite for an “inspection” is virtually indistinguishable from staging an attack to damage, disrupt or destroy it. “It’s clear that Russia is developing on-orbit capabilities that seek to exploit our reliance on space-based systems that fuel our American way of life,” he says. Raymond wouldn’t comment specifically on Russia’s intentions with the shadowing satellites.

Over the past decade, space weaponry has gone from the stuff of science fiction to reality. A flurry of advancements from the U.S., Russia and China has altered the image of outer space as a peaceful sanctuary and instead stoked fears that an arms race has extended into the heavens.

But even if the Russian satellites are doing the most intrusive things the Pentagon and outside observers imagine, none of them would violate treaties or international law. Absent binding agreements, the incident portends a growing a cat-and-mouse game in space. “We prefer space to remain free of conflict,” Raymond says. “We think that responsible space-faring nations need to have conversations about developing these norms going forward.”

It is a historical truth that where humans have ventured, violence has followed. But conflict in space isn’t in any nation’s interest. There are more than 1,000 American satellites circling the planet, enabling everything from commerce, banking, transportation and communications. Russia, China and other developed nations have also grown increasingly dependent on satellites for commercial as well as military purposes, which raise the risks for miscalculation.

The U.S. government’s space-based operations are among the most highly technical and classified secrets in its possession. Raymond’s willingness to go on the record about the ongoing event provides a glimpse into what military officials see as an increasingly congested and contested environment.

Robert Cardillo, the former director of the U.S. National Geospatial-Intelligence Agency, says space is a “messy environment,” which without established rules, could turn into the Wild West. An attack on a satellite constellation, such as GPS, which is owned and operated by the U.S. Air Force, could have far-reaching consequences like halting ATM banking transactions or causing a blackout in navigation applications on users’ smartphones, which occurs billions of times a day around the globe.

The developments hark back to military concept that helped keep the world safe from nuclear apocalypse during the Cold War. Mutual assured destruction (MAD)—the military doctrine that posited a nuclear strike from one nation would result in a full-scale counterattack from the other—helped prevent the U.S. and the Soviet Union from using the massive arsenals they each amassed during decades of armed standoff.

But MAD eventually became backstopped by a series of treaties and open lines of communication designed to avoid accidental escalation of conflict. The U.S., Russia and other nations have yet to establish a similar diplomatic structure for space, and experts warn of the dangers of weaponizing the cosmos without them. “Deterrence is something we just haven’t dealt with,” in space Cardillo says. “If you make it, you can break it.” 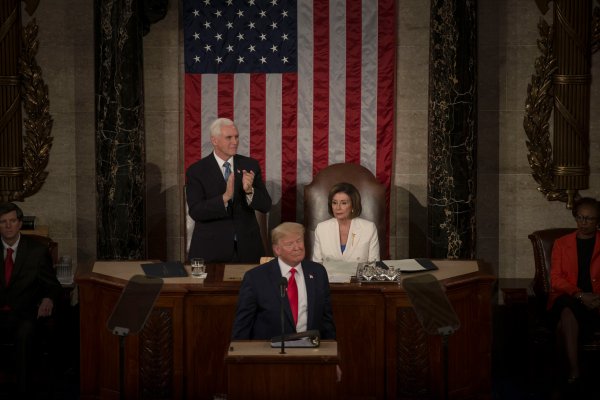 Fact-Checking Trump's 2020 State of the Union
Next Up: Editor's Pick