Weather is Offill’s third novel, after Dept. of Speculation and Last Things
By Annabel Gutterman

The narrator of Jenny Offill’s latest novel, Weather, is anxious about a lot of things. There’s her brother, a recovering drug addict, who inserts himself into her life constantly, to her husband’s dismay. There’s her precocious young son, who has just switched elementary schools to one that does not allow parents to walk their children into the building. And then, of course, there is the existential dread that comes with working for a podcast in which the host answers paranoid listeners’ questions about how to prepare for the end of the world.

Though the world may not be ending quite yet, it often feels like it for librarian Lizzie Benson. In her 2014 hit Dept. of Speculation, Offill animates her overwhelmed protagonist through brief, energetic scenes that capture the ironies of modern life, and she continues in this mode, to great effect, in Weather. In one such scene, Lizzie cleans mouse droppings from her spice rack with paper towels. But then, laden with guilt over paper waste, she remarks, “I’ve already undone all the good I’d done in the world until now.”

After the 2016 election, Lizzie’s nervous energy is only amplified as podcast listeners send increasingly urgent questions about how to ready themselves for an impending doomsday. Their unsettling inquiries are scattered throughout Weather, enhancing its already frenetic structure. The effect is an eerily realistic reflection on what it feels like to exist in a bubble of nonstop information.

As Offill showcased in Dept. of Speculation, which dissects the intricacies of a marriage over several years, her power comes from her tight, spare prose. This proves particularly poignant whenever Lizzie interacts with her son, who makes delightful observations about a world he’s coming to understand. As the duo goes out to eat at a diner, they see a sign that reads NO ANIMALS ALLOWED. “But we are animals, right?” the boy asks his mother.

The plot intensifies with familial drama as Lizzie’s brother demands more of her support, which in turn puts a strain on some of her most important relationships. And as these dramas play out, Weather evolves from a darkly funny commentary on surviving the 21st century to a timeless examination of the challenges that come with loving and living with the people we hold closest. 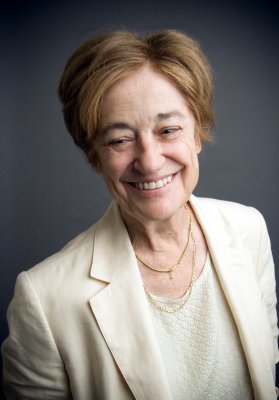 Walter Isaacson on How Book Editor Alice Mayhew Shaped Stories Like All the President's Men
Next Up: Editor's Pick