Should Iowa and New Hampshire Still Vote First? It May Matter Less Than You Think

There is plenty of data about Twitter hashtags, but not many hashtags about data. The one exception I know of is “#IowaCaucusSoWhite,” which is both blunt and correct. Around 87% of Iowans are white and non-Hispanic, compared to just 61% of the country as a whole. Yet every four years the state gets to fire the starting gun in the presidential primaries and caucuses.

The hashtag dates back at least to 2016, but resurfaced this week in the headline of a Los Angeles Times column that suggests beginning the primaries with either a more diverse state, like Nevada or South Carolina (now the third and fourth contests), or even just holding all primaries and caucuses on the same day. Those changes, the thinking goes, could help candidates who appeal to a wider array of Americans gain early momentum going into the rest of primary season, especially ahead of the all-important “Super Tuesday.” Many others have made this argument, including some Democratic candidates, like Julián Castro, who, along with nearly every other nonwhite Democratic presidential candidate, dropped out of the race ahead of the Iowa caucus. And this all was before the spectacular disaster that was Monday’s Iowa caucus.

Any discussion of Iowa’s blanched population usually also implicates New Hampshire, where the population is even less diverse by a small margin. The state, which has long held the second primary contest in presidential election years, is 91% non-Hispanic white. By my calculations, the percentage white population goes up a few ticks in both states when one tallies only the voting-eligible population.

Still, a TIME examination of the demographics and schedules of every Democratic Primary since 2004 found that, in fact, the primary and caucus schedule as a whole is reasonably well distributed between states of different profiles. It has even historically back-loaded whiter states by a small factor. Putting aside the question of who gets to be line-leader for a moment, the process overall is marginally less unfair than it looks.

As the Brooking Institute’s William H. Frey recently wrote, the batches of states that vote in March are, when considered together, fairly well distributed in demographic makeup. “As a group, Super Tuesday voters (which include those from the nation’s two largest states, California and Texas) are more racially diverse than the nation and somewhat younger,” Frey found in his analysis. “If a consensus candidate is still not chosen by Super Tuesday, the rest of March’s primary calendar … comes closer to the nation in their demographic make-up.”

TIME’s analysis, which I discussed with Frey, tried another method of quantifying unfairness in the voting schedule. For each Democratic primary in the five contests between 2004 and 2020, we pulled contemporary demographic data on just the voting-eligible population. (For 2020, we used 2018 data, which is the most recent available). We also reconstructed the calendar via The Green Sheets. Then we assigned each state a “delay” factor equal to the number of days after Iowa that the official primary or caucus was held. For example: In 2008, when the Iowa Caucuses were held on Jan. 3, the three contests on Feb. 12 (Washington, D.C.; Maryland; and Virginia) had “delays” of 40. The delay in Iowa is always 0.

Last, we looked for evidence of a correlation between this delay and a state’s percentage of white, non-Hispanic individuals eligible to vote in each election. A primary that heavily favored whiter states would turn up a negative number, since a high population of white voters would correspond to a lower delay. (Correlations run from -1 to 1, with figures close to zero meaning there’s virtually no relationship between the two things you’re measuring against one another.)

In 2004, the correlation was 0.19, and in 2008, it was 0.25. Neither of these are strong relationships. But they suggest that, in fact, states with higher percentages of white voters were slightly more likely to go later. Since 2012, the correlation has been largely negligible.

While my method is statistically crude, it suggests that, while the current process of assembling a primary calendar is not necessarily fair, it is sufficiently disorganized to distribute states of different demographic compositions reasonably well — a conclusion in line with Frey’s analysis of the 2020 calendar.

This doesn’t resolve the question of whether two very homogenous states should always go first and second. It’s understandable that some candidates feel that they should not, given the first contests’ momentum-generating ability. But for states, I would argue that holding a contest very early in a primary season diminishes a state’s influence overall. Naturally, the argument for a state holding an early primary or caucus is that the state will lend attention and overall momentum to the eventual winner, influencing every future contest. But there is a reason one does not often encounter the phrase “As goes Iowa (or New Hampshire), so goes the nation.” Neither state, it turns out, is much better at picking the eventual winner than a groundhog.

Meanwhile, states that wait at least until Super Tuesday to have their primary or caucus have far greater odds of contributing to a consensus on which candidate will amass enough delegates to secure a party’s nomination. In recent election cycles, several contests have extended well past this typically critical day, which this year includes California after two cycles in which the delegate-rich state waited until June to vote.

With a crowded Democratic field and at least several strong candidates, it’s perfectly plausible that voters in some of the large states slated for April will not be limited choosing from a single candidate left standing. In any case, Iowa and New Hampshire will be distant memories, both home to voters who will not have a chance to cast a primary ballot with the benefit of everything we’ll learn about the candidates as the cycle moves along.

Still, someone has to go first. Fixing the process is extremely simple: Randomize the order. I don’t foresee this happening. Fortunately, there is sufficient entropy that the order, at least by demographics, appears fairly random.

When should a state aim to hold its primary? “This year is so atypical” because of the large field, Frey said when asked what his move would be, were he negotiating on behalf of a state. “But everything is always so fluky that it’s hard to say.” He noted that there are fairly few contests in early April, which might be a good time for a state to wield maximum influence and garner attention from both the campaigns and the press — though he acknowledged our counterpoint that the first state to hold a primary in April accepts the hazard of many references to The Waste Land. With so many viable candidates, April may be, if not the cruelest month, at least a circus. 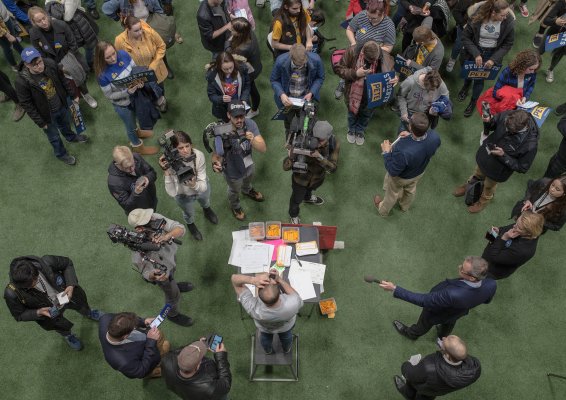 Iowa Caucuses in Chaos
Next Up: Editor's Pick