Elizabeth Warren Bets on Hustle, Grit and Persuasion in New Hampshire and Beyond

The morning after Monday’s chaotic and unsatisfying caucuses in Iowa, a sleepless Senator Elizabeth Warren scarfed down a Sausage Egg McMuffin in the car as she raced to her first post-Iowa event in Keene, New Hampshire. But by Wednesday, she was back to her normal morning routine: oatmeal—followed by a packed schedule, executed at breakneck speed.

“No one can wear Elizabeth down,” her husband, Bruce Mann, said in an interview.

While only 85 percent of the Iowa results have been reported so far, Warren appears solidly in third place. Despite her campaign’s investment in a massive Iowa-based organizing effort, she’s trailing Pete Buttigieg and Senator Bernie Sanders in both delegate counts and popular vote totals. On the New Hampshire campaign trail, Warren spins the Iowa results as a stalemate: she talks about finishing in the “top three,” says the outcome “show[s] that our team can work,” and doubles down on a central theme of her political career: persistence.

“This is an operation that’s built for the long haul,” Warren told reporters after her speech in Nashua, N.H., on Wednesday, “and I’m loving every minute of it.”

But to edge out Sanders, who has a devoted fan base of hardcore progressives, and Buttigieg, who is building a coalition of moderates and disaffected conservatives, Warren needs more than grit. She’s got to consolidate the Democratic base. And that means retooling her message. At her event in Nashua on Wednesday, her campaign’s old “Dream Big, Fight Hard” signs were few and far between, replaced by a different, more universal plea: “Unite the Party.”

A big part of her unity play is to reach out to supporters of other Democratic candidates, including Julián Castro, Kamala Harris, Cory Booker and Beto O’Rouke, who have since dropped out of the crowded field. “We started this race with twenty-some people running for President. A lot of them aren’t in it anymore, and I gotta tell you, I’m pretty upset about parts of that,” Warren said in Nashua. “Cory Booker gets pushed out because of money. It’s not right.”

Warren added that in addition to gaining Castro as a top campaign surrogate, she had called Harris, Booker and Beto, and welcomed their staffers and volunteers into her campaign. Two of the other campaigns confirmed that Warren had personally called their candidates and reached out to their surrogates and endorsers, with a largely positive response. At least two spokespeople from former rivals said they thought Warren had gained most of their candidates’ supporters.

Iowa State Representative Jennifer Konfrst was a die-hard Booker supporter, and then endorsed Warren after Booker dropped out. After a short mourning period, Warren reached out to Konfrst to ask for her support, and the two “had a really good, frank conversation about why I had endorsed Cory and what it had meant to me,” Konfrst told me over the phone. “It was helpful that I never had bad feelings about her and the way she treated other candidates or how her campaign was run.”

While Warren’s is not the only campaign seeking to gain the dropouts’ supporters, she has positioned herself in a way that makes her an easy second choice for candidates who lost their first option, according to her former competitors. “I think a good chunk of people who worked for Kamala or who support her have gone on to support Warren,” says Ian Sams, who was a spokesperson for Kamala Harris’s campaign. “She has kept a relatively positive campaign and I think she wanted to position herself as the unifying candidate who can bridge the Bernie wing and the more establishment wing together without a lot of acrimony and hard feelings.”

Besides, he added, “there’s a desire to make history and help a woman win, that’s appealing to some people who worked for Kamala.”

But that persuasion strategy only works if her persistent organizing pays off. In what now seems like a sign of early narrative-building, campaign manager Roger Lau sent out a memo in late January detailing the Warren campaign’s nationwide organizing plan after Iowa. It included more than 1,000 staffers on the ground across 31 states, with 80 percent focused on grassroots organizing. The memo noted that only 4 percent of delegates came from the early contests, while 34 percent were picked on Super Tuesday. Which means that even before the Iowa caucuses began, the campaign was leaning into what is now one the central themes of Warren campaign: it was built to last.

At Warren’s campaign stop in Nashua Wednesday, supporters seemed unfazed by the Iowa results, and evinced confidence that Warren would go the distance. “She’s got a lot of gall and a lot of chutzpah,” says Aileen Donohue, a 24-year old educator. “Iowa does not make me nervous, because I know she’s a fighter and I know she can win.” 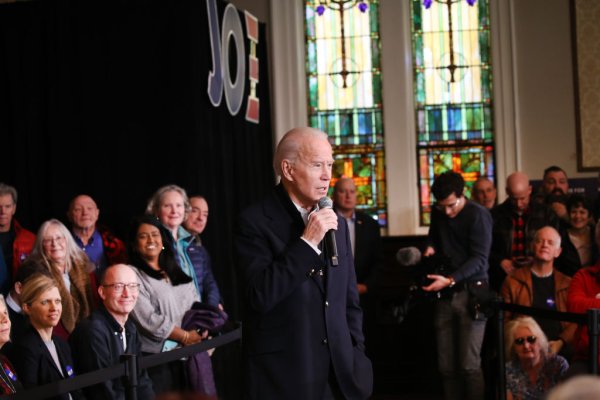 Amidst Lackluster Results in Iowa, Joe Biden Struggles to Reset in New Hampshire
Next Up: Editor's Pick