Menthol pods for Juul Labs e-cigarettes are displayed for sale at a store in Princeton, Illinois, on Sept. 16, 2019.
Daniel Acker—Bloomberg/Getty Images
By Jamie Ducharme

New Congressional documents reveal that e-cigarette maker Juul Labs pitched its products to at least eight Native American tribes, in a move tribal health advocates say is as disturbing as it is expected.

“I always suspected that the targeting of tribes was more pervasive than we knew,” says Rae O’Leary, a public health analyst who founded the anti-tobacco Canli Coalition of the Cheyenne River Sioux Tribe (CRST) and in July testified before Congress about Juul’s outreach to the CRST. “It’s saddening. The tobacco industry and the e-cigarette industry see us as a vulnerable population, one they can take advantage of.”

The new documents, released Feb. 5 by the Congressional Subcommittee on Economic and Consumer Policy, build on O’Leary’s testimony, illustrating the extent to which Juul sought to implement “switching programs” and sales partnerships with numerous tribes—an approach that advocates and lawmakers find eerily reminiscent of Big Tobacco strategies.

“Big Tobacco targeted Native Americans and caused them to have the highest rate of tobacco use in America,” Rep. Raja Krishnamoorthi, chairman of the Subcommittee, said in a statement provided to TIME. “It is disturbing to see JUUL following in Big Tobacco’s footsteps by preying on Native American communities.” Juul did not respond to TIME’s request for comment.

Smoking rates in the U.S. have declined dramatically in recent decades, but remained disproportionately high among American Indians and Alaska Natives (AI/AN). In 2018, more than 22% of AI/AN adults reported smoking cigarettes, according to U.S. Centers for Disease Control and Prevention (CDC) data, compared to about 14% of American adults overall. Lung cancer deaths are also disproportionately common among AI/AN adults, studies show.

The reasons for those discrepancies are numerous and often intertwined. American Indians and Native Americans “suffer from the effects of historical trauma and stressors in our lives, and have problems in the areas of poverty, housing, all of these social determinants of health,” says Dr. Mary Owen, director of the Center of American Indian and Minority Health at the University of Minnesota Medical School and a Native physician for the Fond du Lac Nation. All of these things, Owen says, can drive people toward addictive substances.

Tobacco also holds a unique place in Native American culture, since many tribes use it ceremonially and view it as sacred, Owen says. While she says ritual use is “completely different” than vaping or smoking, some tobacco companies have capitalized on that association—as well as tribal sovereignty, which exempts Native populations from many tobacco laws and regulations—in their sales and marketing practices. Among other strategies, tobacco companies have used price reductions, charitable donations and sponsorships to forge relationships with tribes “not only to increase sales…but also to maintain goodwill among American Indian/Alaska Native leaders [and] improve overall image and credibility,” according to a paper published in Nicotine & Tobacco Research in 2019.

Now, e-cigarette use is a growing problem, especially for Native youth. From 2014-2017 more than 20% of middle and high school students who identified as AI/AN reported current tobacco product use, with e-cigarettes the most commonly used product among this group, according to CDC data.

The issue first got major attention when O’Leary testified in July about a visit Juul representatives paid to the CRST last winter. (O’Leary is a member of the Turtle Mountain Band of Chippewa, but lives and works in South Dakota with the CRST.) During the visit, according to O’Leary’s testimony and documents reviewed by TIME, Juul representatives pitched tribal leaders on the benefits of e-cigarettes, alluding to their potential for smoking cessation and harm reduction.

They also explained the basics of Juul’s switching program, through which tribal leaders would be charged $5 for Juul starter kits, which typically retail for about $50, that they could then distribute for free to program participants looking to switch off combustible cigarettes, O’Leary says. Individuals would also record information about their personal habits and health in a Juul-developed online portal.

According to the new Congressional memo, Juul representatives delivered similar pitches to leadership of five other groups between December 2018 and February 2019: the Moapa Band of the Paiute Tribe, the Lummi Nation, the Nooksack Tribe, the S’Klallam Tribe and the Chickasaw Nation. They also met with two additional tribes, the Muckleshoot Indian Tribe and the Kalispel Tribe, to discuss the possibilities of selling Juul products in tribal-owned casinos, and establishing switching programs for casino employees.

Juul also contacted representatives from an undisclosed number of other tribes, but “these preliminary discussions did not advance to organized meetings to present a switching program proposal,” according to responses the company provided to the Subcommittee. The company added that none of the pitches resulted in deals or data collection and the program was halted entirely in spring 2019.

O’Leary says she fears Juul’s outreach was far more extensive than even the documents suggest, and could potentially also involve lobbying and other efforts. Juul has lobbied in 48 U.S. states—all but Missouri and Vermont—according to the memo, and has also given grants to a number of other minority organizations, including Baltimore’s Black Mental Health Alliance.

“I [never], not for one second, thought it was a good idea,” O’Leary says, saying she was unconvinced e-cigarettes could offer health benefits and help smokers quit, given the lack of research on their long-term effects. “If the tribe were to have accepted this offer and given free product to our adult smokers, this would have perpetuated a greater problem” of nicotine addiction.

“When the tobacco companies come in strong and start advertising in poor communities or in college communities, they’re really taking advantage of people’s living situations and changing their landscape,” adds Susan Strobel, an assistant professor of public health at the University of South Dakota. “They’re corrupting determinants of health,” she says, noting that addiction can exacerbate the effects of poverty by diverting individuals’ money away from things like fresh food.

Owen says she has faith in tribal leadership’s commitment to protecting health, but she’s afraid of what the e-cigarette industry will do next.

“These companies are underhanded and will do things that will affect us, no matter what our tribal leaders say,” Owen says. “It’s insidious. They’ll keep trying.” 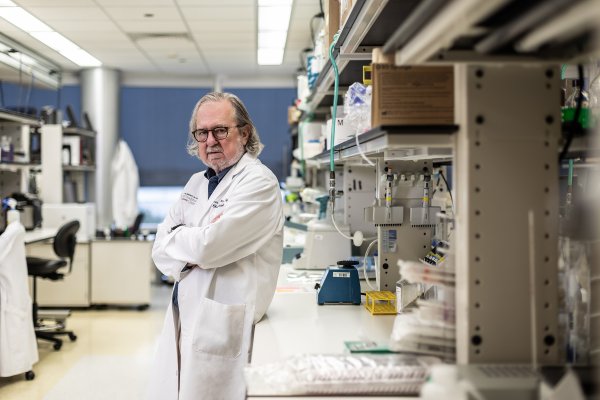 After Cancer Took His Mother, James Allison Taught Our Immune Systems How to Fight It
Next Up: Editor's Pick