Although Jay-Z and Beyoncé sitting during the singing of the National Anthem at Super Bowl LIV may have appeared like a form of peaceful protest, according to the rap mogul, “it really wasn’t.”

The power couple became a topic of discussion after a clip of them and their 8-year-old daughter, Blue Ivy, sitting during the National Anthem went viral, with many online finding parallels between their sitting and the kneeling of Colin Kaepernick in protest of police brutality.

During a TMZ clip of an appearance at Columbia University on Tuesday, Shawn “JAY-Z” Carter set the record straight on the supposed protest.

“It actually wasn’t. Sorry,” he said. “It really wasn’t. What happened was, it was not premeditated at all.”

Jay-Z explained that they were sitting because they were discussing Lovato’s performance.

“So, the whole time we’re sitting there and we’re talking about the performance,” he said, noting that he would not make his daughter be part of a protest.

Jay-Z, who has been a vocal supporter of Kaepernick, faced criticism in the past year after his company Roc Nation announced a partnership with the NFL, which includes producing the Super Bowl halftime show. The rapper and businessman pointed to the 2020 halftime show, which starred Jennifer Lopez and Shakira, as a different form of protest.

“We were making the biggest, loudest protest of all,” he said. “Given the context, I didn’t have to make a silent protest.” 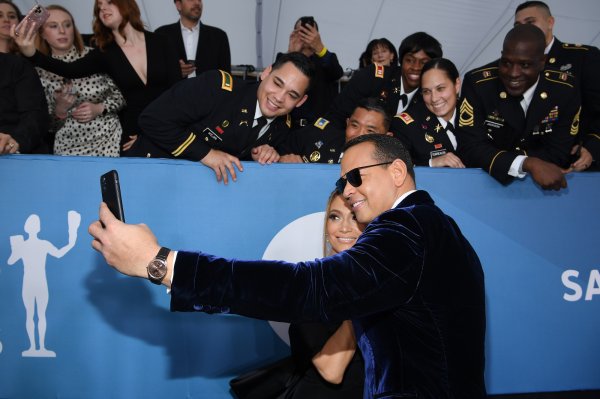 All the Points Go to the Extremely Devoted A-Rod's Instagram Fiancée Masterclass at Super Bowl 2020
Next Up: Editor's Pick