The central question built in to any form of government is how to control the government itself after we give it power over our lives. The Romans summed it up with a simple question, Quis custodiet ipsos custodes—Who will guard the guardians? And the United States’ Constitution is the most sublime answer to this question yet devised. The founders of our country understood the problem deeply and personally; they had just fought a bloody war against an unresponsive and abusive government, led by an unaccountable monarch, and this is why they made our process of making laws and governing so complicated. James Madison summed it up beautifully in Federalist 51:

The last sentence is important; although the Constitution vests the ultimate power in the people—through regular elections—the Framers realized there must also be “auxiliary precautions” like the separation of powers, federalism, various checks and balances, and, finally, impeachment. These guardrails in our nation’s framework were conceived to protect us (the people) from the very government to which we have given such awesome power.

When I give presentations on the Constitution in Maine, I always bring along my handy Vegematic (remember those?), and hold up a cucumber representing concentrated power (“think of this cucumber as King George”), I then put it in the device, press the lever, and out come a dozen or so cucumber strips. This is power divided and dispersed—to Congress (two houses), the president, the states, the Courts, and, of course, the people. It’s certainly not pretty or efficient, but that’s the whole point. Dictators are efficient, democracy is messy.

Which brings us to the impeachment of Donald Trump. The abuse of power charged in the first article passed by the House is serious, especially since the conduct charged goes straight at the integrity of our elections. This is why the argument of the president’s defenders that this whole matter should be left to the voters in November fails—because if interfering with the election itself was (and, as far as we know, still is) the president’s goal, then the potentially compromised election is not a reliable check. Especially when the president to this day has expressed no understanding of how wrong it was to try to finagle another country into announcing that it would do opposition research on one of his principal rivals in exchange for the release of Congressionally-appropriated funds to an ally fending off the armed aggression of Russia. (It appears, by the way, that just the announcement, not the investigation, was what the president and his lawyer, Rudy Giuliani, were after).

But I believe the second article of impeachment is even more serious because of the profound damage the president’s total stonewalling of the process does to the very system of checks and balances which lies at the heart of the Constitution. What the president is claiming is pretty simple—he doesn’t like the impeachment process, so he has ordered the entire federal government not to cooperate at all in the gathering of information on whether the allegations against him are true. No witnesses, no documents, no nothing; and now, 51 Senators have decided that his approach will succeed. It’s pretty obvious that if this is allowed to stand—by the rejection of Article II—there’s nothing left of the impeachment clause and the more general power of Congress to question the actions of the executive are compromised.

Think about it for a minute; have you ever heard of a process anywhere where the alleged wrongdoer has the power to decide what, if any, evidence can be used at his own trial? If this were the case in our judicial system, there wouldn’t be many people in jail and judges, juries, and the police wouldn’t have much to do. Eyewitnesses to the murder? Nah, I don’t think I’ll let them appear.

But the even deeper issue is that this is the latest—and greatest—transfer of power from the Congress to the President in American history. The Congress has been committing slow-motion suicide for about 50 years; on war power, trade policy, even the power of the purse (remember Congressionally-appropriated military construction money being re-routed to fund the Wall?), and now the ability to effectively question (and thus control) the actions of the president, all gone or severely compromised.

Twenty-five years ago, we thought democracy was on the march around the world, but lately, the march is toward authoritarianism, if not outright dictatorship: Turkey, Egypt, China, Russia, even the fragile democracies of Eastern Europe. And allowing a president—any president (for we are establishing a mighty precedent here)—to defy subpoenas, block witnesses, secrete documents, openly intimidate those brave souls who do come forward, and at the end of the day say “I have the right to do anything I want as president” is not in the least consistent with the ingenious system the Framers devised.

One final quote, from Lord Acton, a British historian, and, like Madison, a student of human nature, “All power corrupts, and absolute power corrupts absolutely.” We stand on the brink of relearning that awful truth; I deeply hope that we can avoid the necessity of doing so. 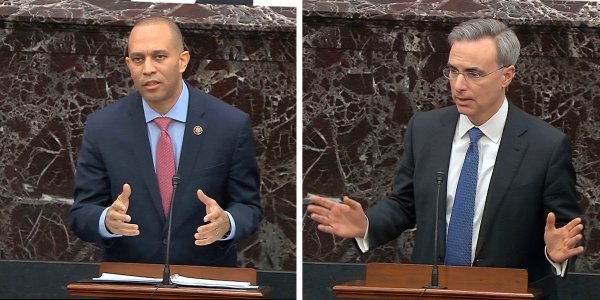 As Impeachment Vote Nears, House Democrats and Trump Defense Get a Last Chance to Make Their Case in Trial
Next Up: Editor's Pick