Scores of koalas — as well as many other animals — have been found injured or dead on a blue gum plantation in south-west Victoria, Australia after trees on the property were logged. Recent bushfires in Australia have taken the lives of thousands of koalas, a species already endangered in the country. This latest incident is yet another hit on their habitats.

The Department of Environment, Land, Water and Planning has been conducting an investigation on-site.

Victoria’s environmental minister Lily D’Ambrosio called the event “devastating” and said her department was also investigating. “Every Victorian can rightly feel not only appalled, deeply saddened and heartbroken, but angry. I am absolutely angry,” D’Ambrosio told The Guardian on Monday.

More than 40 koalas have been killed, with investigators on the scene noting that the number could rise as felled timber is still being cleared.

Over 80 koalas have been assessed since Friday by veterinarians, and 30 were reportedly euthanized due to injuries suffered in addition to those found dead on the site. Koalas that survived the event are being treated for starvation and broken bones by vets or at wildlife centers.

The land was harvested for timber by South West Fibre, a logging company, in October 2019, but was handed back to the private land’s owners the following month. A company spokesperson for South West Fibre said 72 koalas were on site at the conclusion of its logging work; in a statement, the company added:

While authorities have yet to publicly identify a perpetrator, the Australian Forest Products Association told The Age that, “it is absolutely certain that this was not a plantation or a forestry company.”

Keith Troeth, whose family owns the land, also told The Age that he had approved the trees being bulldozed, and argued the response to the koalas’ deaths was being blown out of proportion. “There may have been one or two koalas killed and I’ll wear the responsibility,” he said. “But it’s not the big hoo-ha it’s been made out to be.”

Troeth did not immediately respond to TIME’s request for comment.

D’Ambrosio said the government considers the act a breach of the Prevention of Cruelty to Animals Act and the Wildlife Act. “We will do everything possible to bring the people responsible for this to account and will throw every penalty available to us at them,” she said.

“Look at the destruction that they have done,” local resident Helen Oakley said in a tearful video that has gone viral. “There are mothers killed with their little babies. Australia should be ashamed of this.” 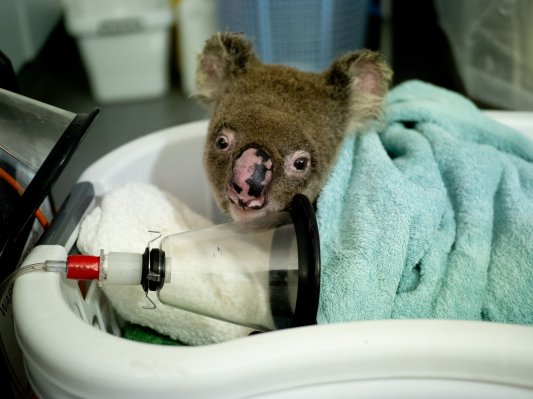 Watch: Koala Recovers After Injured in Bushfires
Next Up: Editor's Pick