Photos of the adorably large-eared snow creations recently began cropping up all over Twitter and Instagram, catching the attention of many a Star Wars fan and effectively kickstarting a fun cold-weather trend.

One such Baby Yoda snow sculpture — which may just be the Baby Yoda snow sculpture to end all Baby Yoda snow sculptures — even took home the “People’s Choice Award,” an honor voted on by the general public rather than judges, in the Minnesota State Snow Sculpting Competition at this year’s Saint Paul Winter Carnival. The fantastically elaborate Baby Snowda, dubbed “The Asset” in a nod to Baby Yoda’s code name in The Mandalorian, was created over the course of two and a half days by Jason Moe, Shelden Moe and Kevin Wynn of the “Pig’s Eye Pirates” team and quickly became one of the event’s hottest attractions.

“We knew it was popular,” Jason tells TIME. “All weekend long, we had people commenting on it continually.”

Jason, a mechanical engineer, says that this was the trio’s first time ever snow sculpting — a detail that makes their final product all the more impressive. Not to mention that, according to Shelden, Jason didn’t even known who Baby Yoda was until about three weeks prior to the January competition.

“My teammates didn’t like my original idea and I joked that Baby Yoda memes are hot right now,” Shelden says of how they decided on their subject.

Jason says that he prepped for the competition by 3D printing a model of the planned sculpture that they could use to make sure their measurements were correct when it came time to carve the real thing out of the standard 8-by-8-by-8-foot block of snow provided.

Kurt Konrade, the creator of a viral Baby Yoda sculpture at the University of Denver, on the other hand, says there was definitely less method to his madness.

Konrade tells TIME that he decided to try his hand at sculpting Baby Yoda after he and a fellow zamboni driver at Denver’s Magness Arena successfully carved Game of Thrones‘ Iron Throne out of a previous pile of snow they had cleared off the ice rink. And we’re lucky they did, considering how darling their latest creation turned out.

“After that, we just started seeing what we could and couldn’t do out of popular culture,” he says. “And also Baby Yoda is just kind of ridiculous. He’s ridiculously cute, so why not?”

Photos of the sculpture, which features Baby Yoda sitting up in his crib pod and Konrade says took about 45 minutes to complete, were shared on Instagram by John Mead, the university’s associate director of equipment room operations, on Dec. 5. They even fashioned Mando’s signature helmet out of a bucket and tape for the photo shoot. Talk about dedication to your craft.

See some more Baby Snowdas reimagining the Child in a variety of frosty setups below. 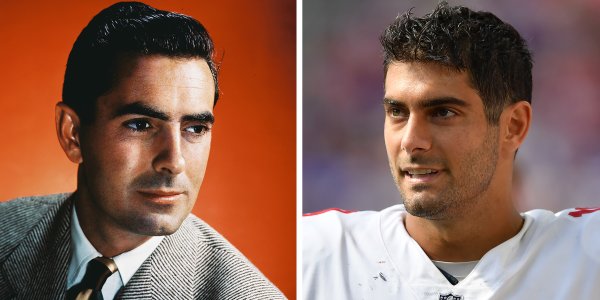 Super Bowl 2020 Star Bears a Striking Resemblance to This Throwback Hollywood Heartthrob
Next Up: Editor's Pick