A Century of War Movies Have Focused on the Courage of Men. These Oscar-Nominated Documentaries Turn the Lens on Women

(L) Dr Amani Ballour, a Syrian pediatrician and subject of 'The Cave'. (R) Waad, Hamza and Sama look at graffiti they painted on a bombed-out building, protesting against the forced exile of the civilian population of east Aleppo in Dec. 2016.
Courtesy of National Geographic; FRONTLINE/“For Sama”
By Suyin Haynes

A toddler with curly black hair is tucked in bed, sucking on a milk bottle. “Good morning sweetheart,” says a voice in Arabic behind the camera. “There’s lots of airstrikes today, right? But we haven’t been hit, yay!” The little girl waves back sleepily. Her name is Sama, and the voice belongs to her mother, Syrian journalist and filmmaker Waad al-Kateab. The next scene shows an aircraft flying ominously overhead and a shell of a building destroyed by airstrikes. It’s September 2016, and Aleppo has been under siege from the Syrian regime and Russian military forces for three months.

That moment between al-Kateab and her infant daughter amid the chaos of the Syrian conflict is just one example of the intimacy depicted throughout For Sama. Directed by al-Kateab and British filmmaker Edward Watts, the documentary follows five years in al-Kateab’s life as she falls in love and becomes a mother while recording the attacks on her city.

For Sama, which won a BAFTA on Feb. 2, is one of two documentaries covering the war in Syria that have been nominated for this year’s Academy Award for Best Documentary Feature. The other is Syrian filmmaker Feras Fayyad’s The Cave, which follows a women-led medical team at an underground hospital in Eastern Ghouta. While most films about war have broadly tended to focus on the more physical, combative side of conflict through the experiences of soldiers, For Sama and The Cave depict war’s human cost from the perspectives of women living through it. “The women’s perspective, whether it’s a journalist, a soldier or a civilian, I think that’s something we just literally haven’t seen as much of, compared to the story of the single male soldier,” says Stacey Peebles, associate professor of English and director of film studies at Centre College in Danville, Ky., and the author of Welcome to the Suck: Narrating the American Soldier’s Experience in Iraq.

Waad al-Kateab filming the ruins of a building destroyed by bombing in besieged east Aleppo, October 2016
FRONTLINE/ “For Sama”

War and conflict have always been common subjects in storytelling, from Homer’s Iliad in Ancient Greece to the Sanskrit epic Mahabharata. They have also been a focus of filmmakers since the advent of cinema. Early efforts to capture the realities of war proved challenging, as filmmakers documenting the battlefields of World War I faced the obstacle of cumbersome camera equipment. While technology had developed by the time of World War II in terms of better equipment and the emergence of special effects, Peebles says storylines often followed a “good guys vs. bad guys” formula. Throughout the 1940s, several Oscar-nominated documentaries were produced by government departments and agencies, including the United States Office of War Information. “The government had a real interest in Hollywood making certain kinds of films where they funded filmmakers, like Frank Capra and the Why We Fight series,” Peebles says. “There was a certain kind of symbiosis there.”

The Vietnam War marked a turning point. “Ever since then, war films have often been more complicated,” says Peebles. “It took awhile for people to know how to tell a Vietnam War story because the conflict itself was received so differently in the United States, and nobody in Hollywood really knew how to make that movie.” The 1974 Oscar-winning documentary Hearts and Minds, along with 1979’s Oscar-nominatedThe War at Home, presented a much more critical view of U.S. military action in Vietnam, while the narrative movies Coming Home (1978), The Deerhunter (1978) and Apocalypse Now (1979) did not follow traditional storylines of heroism and overcoming adversity.

In the media and humanitarian sectors, experts have identified the rise of “compassion fatigue” when it comes to the war in Syria, noting that the West has become increasingly desensitized to coverage of the long-running conflict. Al-Kateab and Watts faced similar concerns. “We were told by so many people that no one would come to watch a Syrian film, that people are tired of Syria and want more entertaining subjects,” says al-Kateab, who amassed over 500 hours of footage from 2011 to 2016. When large scale protests erupted in Aleppo in 2011, al-Kateab was in the fourth year of an economics degree and felt drawn to record evidence of what was happening around her, just using her camera phone at first. “We were just trying to do our roles as protesters. We were just trying to organize ourselves as a movement, at a time when the regime was denying everything that was happening,” she says.

Later, with professional handheld equipment, she filmed everything she could, as her husband Hamza, a doctor, treated wounded civilians in a makeshift hospital. In partnership with British television network Channel 4 News, al-Kateab’s video dispatches from Aleppo went on to receive almost half a billion views online and won 24 awards, including the 2016 International Emmy for breaking news coverage. It was only after Aleppo fell that al-Kateab brought her extensive archive of footage to Channel 4, which then connected her with Watts.

Al-Kateab says the people around her were initially irritated by her insistence on filming everything, from the traumatic recovery of bodies massacred by the regime from a river, to the normal routine of cooking dinner. It was after her close friends, hospital volunteers Gaith and Omar, were killed in an airstrike and by a tank shell that the power of the footage that she had collected became clear. “We didn’t know when we would be killed. Because of that, I was just filming everything. We really believed that this was the only way to tell the story because we never thought that we would make it out.” For Sama concludes with Al-Kateab, Hamza and Sama escaping from Aleppo to Turkey; in May 2018, the family claimed asylum in the U.K. with the support of Channel 4 News and now live in London.

Waad and Hamza al-Kateab with Sama in Aleppo.
FRONTLINE/ “For Sama”

Throughout For Sama, the audience witnesses challenges as al-Kateab lives them. Her narration shares her internal dilemmas as she becomes pregnant; later on, the barrier between filmmaker and subject often fades as al-Kateab films her interactions from behind the camera with grieving mothers, exhausted hospital staff and children traumatized by the daily bombing. “I’d never captured that, and I do wonder if there’s something in male filmmakers that draws them to the front line more,” says Watts, who worked with al-Kateab on the film for two years and has made documentary films for more than a decade. “I think what Waad has managed to capture—whether it’s a female sensibility, or maybe it’s just a human sensibility—is that full spectrum of human life. This film shows you how people live, and that is the essence of the tragedy of war.”

In The Cave, the impact of war on civilians and first responders is especially resonant in one particular scene, filmed in March 2018, when Dr. Amani Ballour and her team start receiving a rush of patients at their underground hospital suffering from mysterious symptoms of an unidentified illness. The medical team soon realizes that the coughing and wheezing patients, many of them children, have been targeted by the regime in a chemical attack. At several points during the film, Fayyad follows Ballour as her colleagues look to her for instructions and she must make difficult decisions in her role as hospital manager. “I’m responding to the terrible reality around me. My job is the right outlet for my anger,” Ballour says in the film.

Yet, as in For Sama, The Cave also shows quieter moments in between crises: the celebration of Ballour’s 30th birthday; the voice messages she receives from her family; a nurse preparing vats of rice for the staff. The Cave also shows the discrimination that Ballour faces, even from those she is trying to help: at one point a man asking for medicine for his relative demands to see a male manager at the hospital, rather than Ballour. “Let them say what they want but I want to change this image,” she later says in the film. “Women can contribute. I have qualifications to contribute to something.”

For Fayyad, it was one challenge to navigate a war zone and evade capture by Syrian regime authorities, and another to encourage his subjects to open up. “I think what we did was a miracle,” said Fayyad, who was nominated for an Academy Award for his 2017 film, Last Men in Aleppo, in an interview with Variety. “We weren’t just facing the Syrian regime or the Russians, we were facing a conservative community.”

Al Ghouta, Syria - Dr Salim (L) holds a light for Amani (R) to blow out during her birthday celebration in the hospital.
Images courtesy of National Geographic

“These films are doing something that a lot of films about war are not doing, even just on an emotional level,” says Peebles. “I can watch Apocalypse Now, and I can get lost in the cinematography, but here, there is no emotional buffer or safety zone, and I think that’s great. It’s a different experience than a lot of people are used to in war films.”

For al-Kateab and Fayyad, filmmaking is also a way of recording crimes committed by President Bashar al-Assad’s regime during the war. “Whatever the regime tries to say through propaganda, I have the evidence that happened,” al-Kateab says. “No one can argue about this when they watch the film.” In October 2019, she launched a fundraising and awareness campaign about the vulnerability of hospitals in conflict zones, based on her family’s experience at the Al-Quds hospital in Aleppo. She says she’s been overwhelmed by the amount of support the film has received, especially given that she didn’t start filming with the intention to make a documentary. “For Sama didn’t start as a film, there was no script or things we wanted to capture. I lived through that situation. I was a mum, and I was one of that community, so I really understood and could see all the details of that life.”

Filmmakers today have greater access to technology, as al-Kateab did starting out with her phone camera, more distribution options through streaming services, and the ability to build support for their films through word of mouth on social media. “We talk about the democratization of filmmaking because of the digital revolution,” Peebles says. “I think that accessibility is a really big deal.” While Fayyad was established, with an Emmy and Oscar nomination to his name as he sought to tell a story about Syria’s first responders, al-Kateab was new to filmmaking, living in the heart of a hospital herself.

Widening accessibility means broadening the perspectives from which stories about war are told. “Whether intentionally or not, stories like American Sniper and The Hurt Locker are always tapping into old ideas about honor, duty and sacrifice,” says Peebles. “When you see the unfiltered devastation that war causes, not just for the soldiers that fight the war, but everyone else it leaves behind, it’s very hard not to put at least an asterisk on the statement that war can be a noble and righteous thing.” 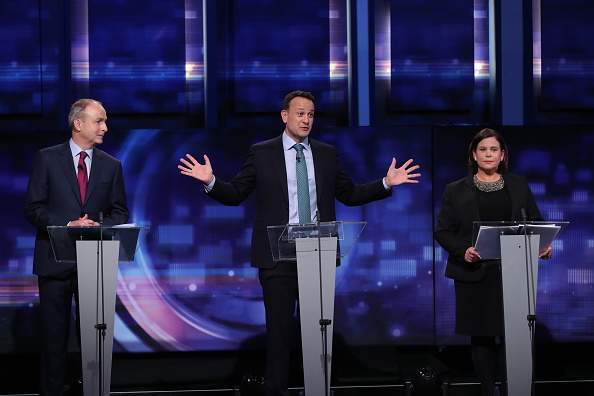 Ireland Goes to the Polls on Saturday. Here's Why the Stakes Are So High
Next Up: Editor's Pick