Why Hit Movies Are Called Blockbusters

Actor Richard Dreyfuss (left) (as marine biologist Hooper) and British author and actor Robert Shaw (as shark fisherman Quint) look off the stern of Quint's fishing boat the 'Orca' at the terrifying approach of the mechanical giant shark dubbed 'Bruce' in a scene from the film Jaws.
Universal Pictures—Getty Images
By Olivia B. Waxman

At the Academy Awards on Sunday, Hollywood will learn which of 2019’s movies will walk away with Oscars. Among the Best Picture nominees is the World War I epic 1917, which was also a hit with ticket-buyers. That fact is somewhat appropriate, as the word blockbuster has wartime origins — though not from the First World War, but the Second.

The word first appeared in the pages of TIME in a Nov. 29, 1942, article on the Allied bombing of key industrial targets in fascist Italy; the bombs used for such missions were called blockbusters because of their ability to destroy an entire city block. As the term continued to appear in the context of media reports on Allied aerial bombings, it entered the American lexicon as a metaphor for something shocking an explosive and shocking.

That transition too can be seen in the pages of TIME. The magazine began to use blockbuster to describe surprising news, from Supreme Court rulings to noteworthy football plays. In the May 9, 1943, issue, TIME used the word to describe a movie, not for its box-office take but for its content: the film adaptation of former Ambassador Joseph E. Davies’ best-selling Mission to Moscow was “audacious in the extreme” such that critics called it “as explosive as a blockbuster.”

But it wasn’t long after that the word started to refer specifically to movies that were commercially successful.

For a piece in the anthology The Return of the Epic Film: Genre, Aesthetics and History in the 21st Century, film historian Sheldon Hall dug up some of the earliest uses of the word blockbuster to describe movies. A Dec. 22, 1950, British Daily Mirror article predicted that Cecil B. DeMille’s Samson and Delilah (1949) would be a “box office blockbuster” when it opened in the U.K.; a review in the Nov. 14, 1951, issue of Variety called the movie Quo Vadis (1951) “a blockbuster” that was “right up there with The Birth of a Nation and Gone With the Wind for box office performance.” When the film opened in Italy in March 1953, TIME reported that it cost more than $6,500,000 to make (more than $60 million today) and was the third biggest-grossing film in movie history, boasting a take of $10.5 million (about $100 million today).

Variety also dubbed 1953 “a year of box-office blockbusters” because 135 releases grossed $1 million or more, and 1958 was similarly dubbed “the year of the blockbusters for the picture business,” including The Bridge on the River Kwai (1957).

Hall posits that it took a few years after the atomic bombing of Hiroshima and Nagasaki for writers to feel comfortable using a bomb-based metaphor in such a lighthearted way, but it soon became clear that the entertainment meaning of blockbuster would win out over the military one. The word “was ultimately rendered safe not only by the fact of its obsolescence as a military weapon, but also by its very pervasiveness as an expression during the postwar period,” writes Hall. “Continual use detached the word from its linguistic origins and ensured that it came to be associated primarily with popular entertainment in general and with the big-budget, high-impact Hollywood hit in particular.”

In the decades that followed, that association only increased.

Before then, movie theaters saw low-turnout in the summer months, when people preferred to be outside than indoors. The release of Jaws was timed to come out well into summer to intentionally spook beachgoers. Blockbusters soon became known for their power to generate lines going around the block. The growth of the video-rental chain Blockbuster Video shortly in the mid-1980s is proof of the popular use of the term in the movie industry.

As the renowned film critic Roger Ebert wrote for TIME 1998: “Spielberg changed the course of modern Hollywood history. Jaws was a hit of vast proportions, inspiring executives to go for the home run instead of the base hit. And it came out in the summer, a season the major studios had generally ceded to cheaper exploitation films. Within a few years, the Jaws model would inspire an industry in which budgets ran wild because the rewards seemed limitless, in which summer action pictures dominated the industry and in which the hottest young directors wanted to make the Great American Blockbuster.” 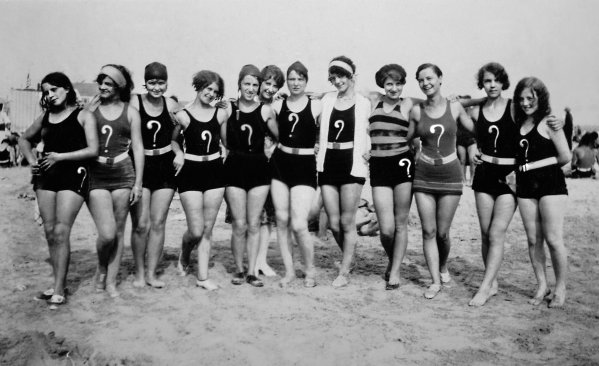 The Past and Future of Punctuation Marks
Next Up: Editor's Pick