Rep. Rashida Tlaib listens at a hearing before the House Oversight and Reform Committee on July 18, 2019 in Washington, D.C.
Win McNamee/Getty Images
By Sanya Mansoor

U.S. Rep. Rashida Tlaib apologized Saturday for booing Hillary Clinton on Friday night at a campaign event in support of Sen. Bernie Sanders’ presidential bid. Tlaib has been a key surrogate for the Vermont senator as he remains in Washington for President Donald Trump’s impeachment trial, and the event came after recent comments by Clinton made dismissing Sanders and his campaign.

During a panel discussion at the event in Iowa that included Tlaib and her fellow U.S. Reps. Ilhan Omar and Pramila Jayapal, the moderator began alluding to Clinton’s comments about how “nobody likes” Sanders. The moderator said, “Last week when someone by the name of Hillary Clinton said that nobody—” before responding to someone in the crowd saying, “We’re not gonna boo, we’re not gonna boo, we’re classy here.”

“No, no, I’ll boo.” Tlaib said, prompting some cheers from the crowd. “You all know I can’t be quiet. No. We’re gonna boo. That’s alright the haters will shut up on Monday when we win.”

On Saturday, Tlaib apologized for the affair on Twitter, saying that she was “frustrated by attempts to dismiss the strength and diversity” of the movement supporting Sanders and that she allowed her “disappointment” with Clinton’s comments about Sanders “get the best of me.”

“You all, my sisters-in-service on stage, and our movement deserve [sic] better,” Tlaib said. “I will continue to strive to come from a place of love and not react in the same way of those who are against what we are building in this country.”

Tlaib’s comments came after remarks Clinton made in an interview for an upcoming Hulu documentary series became public.

“Nobody likes him, nobody wants to work with him, he got nothing done,” she said. In an interview with The Hollywood Reporter earlier this month, Clinton said she stuck by her words. She refused to say whether she would support her 2016 opponent if he wins the Democratic nomination, noting that, “I’m not going to go there yet.” She proceeded to criticize him and his leadership team. “We’re still in a very vigorous primary season. I will say, however, that it’s not only him, it’s the culture around him. It’s his leadership team. It’s his prominent supporters. It’s his online Bernie Bros and their relentless attacks on lots of his competitors, particularly the women.”

After criticizing Sanders, Clinton later said she would back whoever is elected the Democratic nominee for President because “the number one priority for our country and world is retiring Trump.” 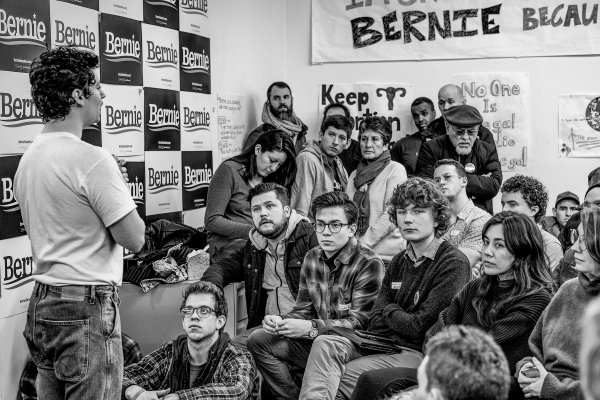 Inside Bernie Sanders’ Iowa Ground Game
Next Up: Editor's Pick