The Library of Congress Scrapped Plans for a 2017 Women's March Mural, Fearing It Would Be Seen as Anti-Trump: Reports

Protesters walk during the Women's March on Washington, with the U.S. Capitol in the background, on January 21, 2017 in Washington, DC.
Mario Tama—Getty Images
By Madeleine Carlisle

The Library of Congress canceled a mural-sized photograph of protestors in the 2017 Women’s March in Washington D.C. out of concern it could appear critical of President Donald Trump, The Washington Post reported on Friday.

The Post reports that the photograph was going to be included in the “Shall Not Be Denied: Women Fight for the Vote” exhibit that opened in June, but was replaced just five days before the exhibit opened with photos from the Women’s March in Houston instead.

This reported change resembles a recent controversy involving the National Archives, who recently apologized for blurring signs in a photograph of the 2017 Women’s March in Washington D.C., some of which were critical of the President. The altered image has since been replaced with the original.

In a statement to TIME, Library of Congress spokeswoman April Slayton said, “When the image was enlarged in order to fill part of a wall and arrived on-site just a few days before the exhibit was scheduled to open, it became clear that the some of the language on the signs included expletives that were not appropriate for a family-friendly exhibition.” She added that some expletives would have been on the eye level of children. Slayton said the Library of Congress went with the image from Houston because it “represents the contemporary women’s movement without the vulgar language included in the original image.”

Slayton also said that the “Library’s general policy is to curate and review exhibition content internally and make any necessary edits or changes as part of that process before the exhibition opens to the public. That was the case here as well. No outside entities reviewed this exhibition’s content before it opened or opined on its content.”

The Post reports that Kevin Carroll, the image’s photographer, wasn’t told about concerns profanity but was asked in a May 29 email from the exhibition director, Betsy Nahum-Miller, if he had any images without anti-Trump signs. According to The Post, Nahum-Miller wrote that the image “has some other features that we know will be a problem politically and therefore need to be replaced. There were a couple of anti-Trump messages that appear very clearly in the image.”

The Post reports that Carroll sent other photographs from the Washington D.C. March, but Nahum-Miller told him they had selected the image from Houston because there wasn’t time to look through the photographs he sent for “unbeknownst controversial images.”

In her statement, Slayton said, “The Library of Congress also strives to present historical exhibitions that are balanced and engaging for all visitors with diverse points of view and generally seeks to avoid content that would unnecessarily alienate visitors based on political views.” 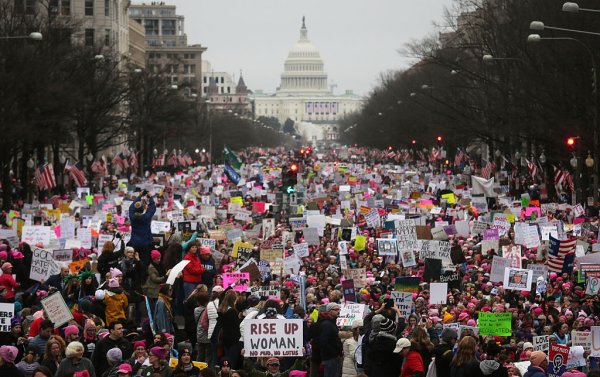 National Archives Apologizes for Altering Photo
Next Up: Editor's Pick