Ideas
By Rashid Khalidi
Khalidi is the Edward Said Professor of Modern Arab Studies at Columbia University and author of The Hundred Years’ War on Palestine.

Once again, a tawdry deal has been done over the heads of the Palestinians, in their absence, and ignoring their rights – indeed their very existence as a people. As with the Balfour Declaration of 1917 and UN Security Council resolution 242 of 1967, the greatest power of the age, today the United States, is once again dictating terms for the disposition of Palestine tailored to meet the demands of only one side of the conflict.

According to Trump’s plan, Israel annexes over a third of the West Bank including all illegal settlements and gets complete security control over a Swiss cheese Palestinian “state” with no sovereignty, no contiguity, and no control over its borders; Israel gets all of Jerusalem, including the holy places; Palestinian refugees are denied return, not only to Israel, but to the Palestinian “state” unless Israel approves, so most will be forced to remain where they are; and every other wish of the Israeli hard right is fulfilled.

While President Donald Trump stood before a cheering White House audience together with Benjamin Netanyahu, there were ghosts in the room. They were the ghosts of the 12 million Palestinians, who are to pay the price of the disreputable formula they have cooked up. Their rights and interests are passed over in silence, whether those displaced in 1948 and 1967 in order to create a Jewish state in a majority Arab country, or those who still live in different parts of the single Israeli-ruled entity that is Palestine-Israel today. International law will be ignored, as will the scores of UN resolutions to which the U.S. was a party, and which the Trump administration has flouted.

The “Deal of the Century” as Trump described it, is in fact a typical colonial concoction: put together by those who believe that they know better than the benighted natives do what is best for them, and elevating the rights and interests of one group over those of another. This pattern, set by Great Britain and the early Zionist movement, has been followed by the U.S. and Israel ever since then.

Given the blatant biases, and the bland ignorance of Middle Eastern realities, of Donald Trump, Jared Kushner, David Friedman and the other architects of this parody of a peace plan, one thing is absolutely certain. This plan will not bring peace between Palestinians and Israelis, nor will it bring either people lasting security. It will certainly not resolve the underlying conflict between them. Whatever the White House and their extremist Israeli mentors may think, this conflict cannot be assuaged by imposing one side’s demands on the other, or by throwing dollars raised from Arab Gulf monarchies at the Palestinians. Such an approach can only entrench an unjust status quo whereby Israel continues to oppress the Palestinians.

What we are seeing now is simply a continuation of what this administration has done since it came into office: enforce one blatantly pro-Israeli fait accompli after another, thereby checking off every item on the wish list of the Israeli right wing and of Trump’s electoral base and some of the main donors to his campaign. Recognition of Jerusalem as Israel’s capital, the move of the U.S. Embassy to Jerusalem, closing the PLO office in Washington D.C., recognition of Israel’s annexation of the Golan Heights, the defunding of the UN body that provided education and health services to Palestinian refugees, and the redefinition of refugees to exclude the Palestinians, all form part of this cascade of pandering initiatives.

While far more extreme and one-sided than anything that preceded it, this new plan also constitutes a continuation of a much older pattern. The Palestinians, the overwhelming majority of the population of Palestine at the time, were not even mentioned in the Balfour Declaration, whose terms governed their lives for three decades. Nor were they mentioned in UNSC 242, the supposed basis for “peace-making” in the Middle East, which not surprisingly has signally failed to bring peace to Palestine/Israel in over half a century.

Talking, or at least listening, to only to one side of a complex conflict, as the great powers have done since 1917, guarantees only one kind of outcome: one-sided and unjust. That is all that has been on offer to the Palestinians for most of the past century.

Any formula advanced as a resolution of the conflict that is not squarely based on principle of equality and justice will inevitably fail. Indeed, Trump’s “deal” is not only a preordained failure, but will likely exacerbate the conflict by encouraging the stronger side’s illusion that it can impose its will on the weaker one with American help.

Difficult although it may be for some to accept, and hard as it will be to achieve, absolute equality of human, personal, civil, political, and national rights must be enshrined in whatever future scheme is ultimately accepted by the two societies. Ultimately, what is at its core a 19th century colonial project, with different classes of rights for different peoples, cannot survive in the 21st century. Until would-be peace-makers understand and accept these hard facts, they will continue to exacerbate the problem of Palestine, as have all U.S. administrations from that of Harry Truman to Trump. 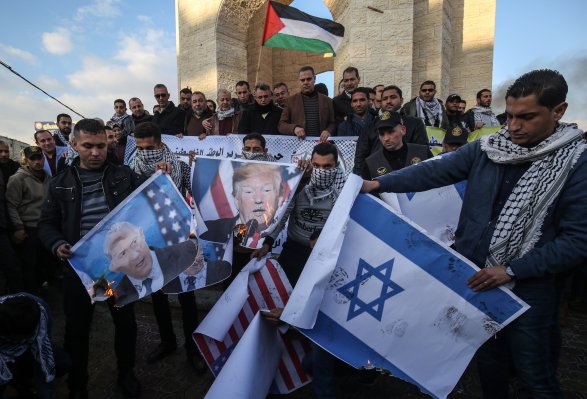