'We Are Right Down the Middle.' CBS Evening News Anchor Norah O'Donnell on Reporting in the Trump Era

"I’ve never seen so much cultural change in such a short period of time."—Norah O’Donnell, on CBS News under its new president, Susan Zirinsky
Jared Soares for TIME
By Eliana Dockterman

Norah O’Donnell is testing out the color-changing lights in her new Washington, D.C., studio. Using an iPhone, she highlights the stage with red then purple then green. “We can have photos on the floor too,” she says. “Or graphs. With the election, there are a lot of options.”

The studio is sparkling white, like the inside of an Apple Store, a physical manifestation of a fresh start for a network that has struggled with a series of sexual-harassment scandals and a drop in the ratings in the past few years. O’Donnell took over as anchor of the CBS Evening News in July and eagerly agreed to the suggestion from the new CBS News president, Susan Zirinsky, to move the show from New York City to the nation’s capital in December in hopes of boosting the ratings. O’Donnell had first risen to prominence as a White House correspondent, and her husband, chef Geoff Tracy, operates a restaurant group based in D.C.

Though some media prognosticators called the shake-up “a risk,” O’Donnell shares much in common with her venerated predecessors, including Walter Cronkite, once famously dubbed “the most trusted man in America.” Her high-tech studio notwithstanding, O’Donnell is an old-school journalist operating in a world that’s increasingly hostile to that type of newscaster. She prides herself on her shoe-leather reporting skills. She still reads six hard-copy newspapers every morning. On Twitter, she doesn’t spout opinions or share personal anecdotes, just stories from CBS.

“My parents are scientists. We’re fact-based people,” she says. “I was never someone who was siloed into a certain group, ideologically or just growing up. I did theater, and I did cheerleading. I went to Catholic church camp and Baptist church camp. I don’t judge. I’m naturally curious.”

Nonjudgmental, neutral, reliable—these aren’t the most exciting ways to brand a broadcast in any era, but it’s a particularly difficult sell in 2020 when audiences are largely looking to affirm their own views: a 2019 Pew study found 55% of Americans get their news from social media, an 8% increase over the prior year. Facebook and Twitter feeds tend to be either red or blue, full of articles posted by friends hailing from similar backgrounds who share similar political opinions. “Social media is driven by an algorithm. It learns what you like and feeds it back to you. It reinforces our political beliefs,” she says. “CBS Evening News is not driven by an algorithm.”

And yet the same divide is reflected on the networks that CBS News competes with for viewers. O’Donnell argues that by staying neutral, at the risk of losing more partisan audience members to MSNBC or Fox, CBS can snag interviews with world leaders, even the most divisive ones. “We are right down the middle,” she says, adding, “It’s why Joe Biden sat down with me. It’s why [Saudi Crown Prince] Mohammed bin Salman, one of the most scrutinized leaders in the world, sat down with me twice.” O’Donnell prides herself on asking the hard questions, and quickly. Her first query posed to bin Salman on 60 Minutes was whether he ordered the murder of journalist Jamal Khashoggi, which the CIA has concluded the crown prince did. (The crown prince “took responsibility” but denied ordering the execution.)

O’Donnell took over the Evening News at a particularly precarious time for CBS. Back in 2012, O’Donnell shared a desk with Gayle King and Charlie Rose as the co-anchors of CBS This Morning. Their chemistry buoyed the program’s ratings. But in 2017, Rose was accused of sexual misconduct at CBS during the first wave of the #MeToo movement. O’Donnell and King had to announce and react to the news on the air. True to both of their brands, O’Donnell dealt out the facts with a poker face, while King processed the news emotionally, trying to reconcile her friendship with Rose with the allegations.

Rose’s fall was just the beginning. Sexual-harassment scandals felled CBS News chairman Jeff Fager and CBS CEO and chairman Les Moonves, and former employees reported a toxic culture that pervaded the network. CBS was not the only network forced to contend with #MeToo: Fox News and NBC made headlines for sexual-harassment allegations too.

Even as CBS struggled with the fallout, O’Donnell was reporting on the #MeToo movement outside of media. O’Donnell, who grew up in a military family, won an Emmy Award in 2018 for a story on a sex-abuse scandal at the U.S. Air Force Academy. “I firmly believe sunlight is the best disinfectant,” she says of reporting on that story. “There’s no harder interview to do than that, and to try to help [survivors] tell their story in a way that not only reveals what happened to them, but hopefully ushers in change, because that’s also part of it … making sure that something changes.”

Yet she’s circumspect on the topic of whether things are changing at CBS News itself. “I’m sort of done with that story,” she says. “I want to be judged for my work.” But she did have a hot-mic moment when reporting on a sexual-harassment story last year. Some listeners believe they heard her say, “Sounds like someone else here.”

O’Donnell insists that she does not feel like she is on the edge of a glass cliff, thrust forward as the female face of a network plagued by men’s wrongdoings. The move to D.C. has strengthened viewership numbers. The broadcast drew 6.8 million viewers one evening in December, a peak for the show since O’Donnell took over, though it still trails ABC’s and NBC’s programs. Ratings declines have slowed across the network, including on CBS This Morning, where King has lured younger viewers with high-profile interviews, like a sit-down with R. Kelly after a documentary accused the R&B musician of sexual assault. O’Donnell credits the progress CBS News has made to its new president, notorious workhorse Zirinsky. O’Donnell says Zirinsky connects with everyone in the building, which builds a sense of community and accountability. “I’ve never seen so much cultural change in such a short period of time,” she says. “Leadership matters. If the boss cares, if she’s there late every night, talking to every reporter, every producer, every janitor—if the boss cares, everyone cares.”

Zirinsky—famously the inspiration for Holly Hunter’s ridiculously efficient character in Broadcast News—has spent 45 years at CBS and, after already replacing Fager at 60 Minutes when he was dismissed, was asked to take the top job at CBS News to clean up the network’s mess. Zirinsky has said she was asked to take the job before but was loath to give up her hands-on role as a producer. She’s retained that title and spends every night in the control room while O’Donnell records her show. “I’m sorry, but no other president of the network is in the control room of both their morning show and their evening news show every day,” says O’Donnell.

It’s a good thing too. Before O’Donnell’s move to D.C., a soundboard in the New York City studio caught fire during a broadcast of the Evening News. Zirinsky jumped into action. “She’s down in the basement on West 57th Street with a dozen guys telling them what to do and taking pictures,” says O’Donnell. One more fire out, the hope is that the story moves elsewhere.

The original version of this story originally stated that Susan Zirinsky took over for Jeff Fager as the head of CBS News. She took over that job from David Rhodes. 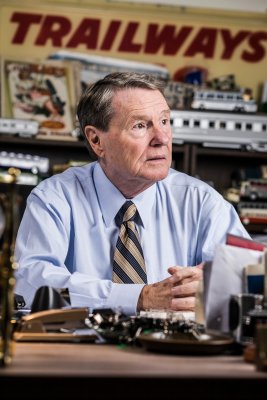 Bob Schieffer Remembers Jim Lehrer—And His Best Advice on Moderating a Debate
Next Up: Editor's Pick