Quinncy Parke, 17, testifies to the South Dakota House State Affairs committee against a bill that would make it illegal for doctors to give gender reassignment surgery or hormone treatment to trabs children under 16 on Jan. 22, 2020 in Pierre, S.D.
AP Photo—Stephen Groves
By Katie Reilly

South Dakota lawmakers are scheduled to vote Wednesday on a bill that would make it a crime for doctors to treat transgender children younger than 16 with puberty blockers or offer gender confirmation surgeries.

The vote comes a day after South Dakota state Rep. Fred Deutsch apologized for comparing doctors who treat transgender children today to Nazis who performed inhumane medical experiments on Jews and other minorities during the Holocaust.

Deutsch, a Republican lawmaker who introduced the bill, compared gender reassignment surgery and other medical treatments for transgender people to “mutilation of our children” during a radio interview. But many medical experts say gender-affirming medical treatment results in positive health outcomes for transgender youth. Puberty-blocking medicine, for example, essentially pauses puberty by making the body release fewer puberty-stimulating hormones — a non-invasive, reversible process.

“To me, that’s a crime against humanity when these procedures are done by these so-called doctors, you know, that dance on the edge of medicine. I just don’t think it should be done,” Deutsch said during an interview last week with the Family Research Council, a conservative, Christian advocacy organization that supports his bill.

“I’m the son of a Holocaust survivor. I’ve had family members killed in Auschwitz,” he continued. “And I’ve seen the pictures of the bizarre medical experiments. I don’t want that to happen to our kids. And that’s what’s going on right now.”

Though he initially stood by the remarks, in a statement to CNN on Tuesday, Deutsch walked them back somewhat: “Comments I made based on my history of being the son of a Holocaust survivor are regrettable,” he said.

His bill — which would be the first law of its kind if it passes, though it is similar to legislation under consideration in other states — is scheduled for a full vote in the South Dakota House on Wednesday afternoon. The bill would make it a misdemeanor for medical professionals to perform gender confirmation surgery or prescribe hormone therapy to transgender children under the age of 16.

It has been strongly opposed by advocates for trans rights, who say such legislation conflicts with medical guidelines and would criminalize medically necessary treatment that helps an already vulnerable population, as transgender youth are at a higher risk for depression and suicide.

“By blocking medical care supported by every major medical association, this legislation represents a callous disregard for the health and wellness of South Dakota’s transgender youth, some of the most vulnerable people in our state,” Heather Smith, executive director of the ACLU of South Dakota, said in a statement. “We want South Dakotans to know that we are investigating all of our legal options. If this bill becomes law, it will be challenged. We will see you in court.”

While the use of puberty blockers has become more common, at least one survey of transgender adults shows it’s relatively rare. A new survey of trans adults found that 16.9% reported wanting to take puberty blockers as minors, but just 2.5% of them received that treatment, according to a study published this month in the journal Pediatrics. The study found that those who received puberty-suppressing treatment had lower odds of lifetime suicidal ideation, when compared to those who wanted such treatment but did not receive it.

Gender confirmation surgery for minors is more rare. The World Professional Association for Transgender Health (WPATH) recommends that American patients wait until they’re 18 to undergo genital surgery, but the organization says chest surgery could be performed earlier if a patient is ready. WPATH guidelines also identify risks associated with withholding medical treatment for trans youth: “Refusing timely medical interventions for adolescents might prolong gender dysphoria and contribute to an appearance that could provoke abuse and stigmatization.”

The South Dakota bill is the latest example of restrictions on transgender individuals’ rights being considered across the country. Last year, South Dakota lawmakers considered and defeated legislation that would have required trans students to participate in high school sports teams based on the gender they were assigned at birth. The state House also passed a bill that would have prohibited public schools instruction about gender dysphoria through seventh grade, but it was killed in the Senate. In 2016, Deutsch also introduced a bill that would have prohibited trans students in public schools from using bathrooms that align with their gender identity.

Republicans have control of the South Dakota House and Senate, but it’s not clear whether there is widespread support for the bill. Republican Gov. Kristi Noem has said she has “a few concerns” about it, the Argus Leader reported.

“When you take public policy and try to fill parenting gaps with more government, you have to be very careful about the precedent you’re setting,” she said Friday. “That’s really the viewpoint I’m looking at it through.” 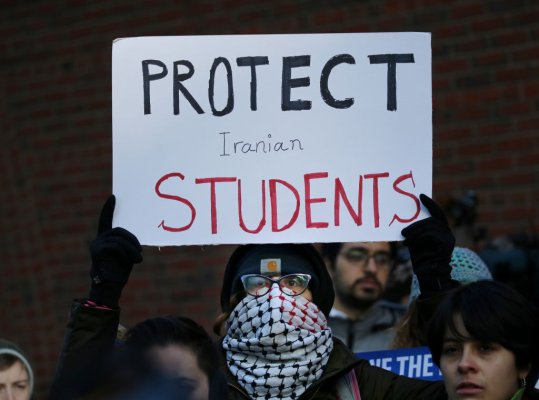 Michigan State University Student Sent Back to Iran
Next Up: Editor's Pick