U.S. Response to Wuhan Coronavirus Grows, But No Emergency Declaration Yet

The Trump Administration has begun scrambling a response to the coronavirus outbreak that originated in the central Chinese city of Wuhan—but has so far stopped short of declaring the situation a public health emergency.

“Americans should know that this is a potentially very serious public health threat, but, at this point, Americans should not worry for their own safety,” Department of Health and Human Services Secretary Alex Azar said during a press conference on Tuesday. “This is a very fast-moving, constantly changing situation.”

The U.S. has five confirmed cases of the deadly virus as of Monday, according to the Centers for Disease Control and Prevention (CDC). Though Washington has yet to declare a public health emergency in the U.S., Azar said he “won’t hesitate at all to invoke any steps we need to take” as the situation unfolds, and the government has started taking other steps to address the outbreak that has killed more than 100 people and infected more than 4,500 worldwide, largely in China.

The CDC and the State Department issued a travel advisory on Monday warning Americans to avoid travel to all of China if possible, and especially to Wuhan, where the virus was first identified. “No American should travel to Wuhan while this virus continues to have impact,” Vice President Mike Pence said.

The Administration has also started conducting advanced screening at the 20 U.S. airports that “receive 90 percent of all passengers from China,” according to Pence. “Any passengers who are ill will receive additional screening,” he said.

On Tuesday, the U.S. government chartered a flight to take several hundred Americans, including diplomats and family members, out of China.

All of the confirmed cases in the United States have been in individuals who had recently traveled to China. “No person-to-person spread has been detected with this virus at the time, and this virus is NOT currently spreading in the community in the United States,” reads the Centers for Disease Control and Prevention (CDC) summary of the situation.

On Monday, Trump tweeted that his Administration is in “close communication” with China and have offered “any help that is necessary.”

The Director-General of the World Health Organization (WHO), which has come under fire for not yet declaring the new coronavirus a global health emergency, met with Chinese President Xi Jinping on Tuesday. The organization announced that “the two sides agreed that WHO will send international experts to visit China as soon as possible to work with Chinese counterparts on increasing understanding of the outbreak to guide global response efforts.” HHS Secretary Azar said the same day that the Trump Administration has also offered to send assistance from the CDC, but has not yet received the go-ahead.

The Senate was briefed on the virus on Jan. 24, and the House of Representatives is holding a briefing for its members on Wednesday.

Former Vice President Joe Biden, who is running for the Democratic nomination for president, wrote an op-ed for USA Today on Jan. 27 arguing that “Trump’s demonstrated failures of judgment and his repeated rejection of science make him the worst possible person to lead our country through a global health challenge.”

But Trump and Pence are still projecting confidence in their ability to handle the brewing crisis. “Here in our country, we’re taking strong steps to see to the health and the wellbeing of the American people,” Pence said Monday. “But as President Trump made clear today, the United States of America stands ready — stands ready to assist the people of China and around the world as they deal with this virus.” 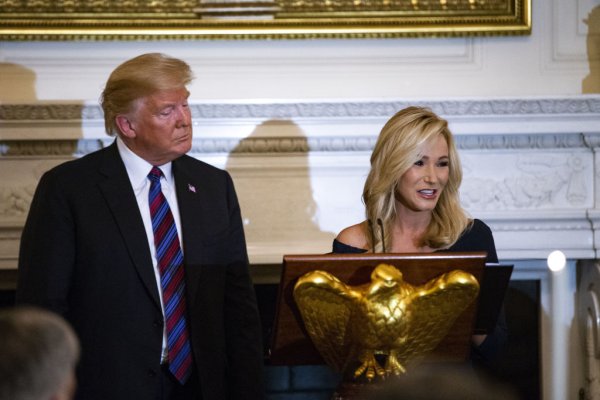 Trump Spiritual Advisor Calls for Miscarriage of 'Satanic Pregnancies'
Next Up: Editor's Pick