Here Are the 11 New Books You Should Read in February

A crop of new books this month asks readers to consider their roots. Many of the authors of February’s most anticipated releases mine their histories to understand how the places they come from have shaped who they are. Others craft narratives that explore the complications that come with moving away but never on from the past. Some voices, like Clare Beams and R. Eric Thomas, are emerging. Others, like veterans Colum McCann and Erik Larson, are already celebrated. Each explores how attachments to home define the contours of our lives. Here, the 11 new books you should read this February.

In journalist Anappara’s first novel, a 9-year-old crime-show fanatic attempts to find his missing classmate. Jai and his two friends search all over the smoggy, unnamed Indian city where children keep disappearing, devastating the community. Though the premise is bleak—­there are thousands of real cases of missing children in Indian cities—the protagonist’s youthful perspective makes a moving case for perseverance and hope.

The Academy Award–winning actor intimately describes loving and living with a troubled sibling, tracing her childhood with her brother Randy. Though they were close as kids, their paths diverged in adulthood: Randy struggled with alcoholism and mental illness, while Keaton rose to prominence in the film industry. Illustrating years they spent both together and apart, Keaton showcases the difficulties of loving someone you can never fully understand.

After a strange flock of birds flies into town in Beams’ debut novel, the students at an all-girls school in 19th- century Massachusetts begin to develop headaches, rashes and odd sleepwalking habits. As they grow sicker, a doctor with a questionable track record is invited to campus, his presence underlining a timely conversation about who claims control of women’s bodies.

Nicole Chung and Mensah Demary (Editors), A Map Is Only One Story: Twenty Writers on Immigration, Family, and the Meaning of Home

How do we define home? The 20 voices in this essay collection seek to articulate what it feels like to live between cultures. From stories about being undocumented in the U.S. to living on the border with Mexico, these personal narratives delve into the ­challenges—and power—that we derive from our connections to place.

Buy Now: A Map Is Only One Story

In his debut novel, Stuart focuses on a working-­class family living in 1980s Glasgow, where alcoholism threatens the unit’s stability and sanity. He narrows in on struggling mother Agnes and her youngest son Shuggie, who is coming to terms with his sexuality. Stuart charts the evolution of their relationship over several years, offering a heartbreaking story about identity, addiction and abandonment.

The Booker Prize winner’s latest novel follows house cleaner Danny, who fled Sri Lanka and is living undocumented in Australia. Danny faces an impossible dilemma after learning critical details about the murder of one of his clients. If he speaks up, the life he worked so hard to build could be threatened, but if he stays silent, the truth may never come to light. The novel takes place over the course of one day, but Danny’s decision highlights a lifetime of real-world anxieties.

At the center of this aching debut is Wallace, a gay black graduate student at an overwhelmingly white Midwestern university. Over the course of a summer weekend, Wallace unveils the pain he’s been carrying his whole life through several interactions with his friends, who understand little about where he comes from. As Taylor exposes the layers of his protagonist’s existence, he crafts a gripping narrative on racism, queerness and trauma.

What does it mean to belong? Thomas poses this question throughout his essay collection as he explores all the places he never fit in, from his conservative black church to the primarily white school he attended. With humor and heart, he dissects the experience of being black and gay in America, simultaneously inspecting the ways the country is evolving.

Buy Now: Here for It

The Splendid and the Vile, Erik Larson (Feb. 25)

Erik Larson, The Splendid and the Vile

When Winston Churchill became Prime Minister in 1940, Britain was about to endure a very violent year: Adolf Hitler’s bombing campaign would kill more than 40,000 citizens. Larson delves into the impact of those 12  months on Churchill and his family, painting a complex portrait of leadership and determination in the midst of chaos and fear.

Buy Now: The Splendid and the Vile

After both their daughters are brutally murdered, a Palestinian and an Israeli bond over their enormous losses. Inspired by the true friendship between Bassam Aramin and Rami Elhanan, the latest novel from the National Book Award winner blends fiction with history to examine how two men channel their grief into political power as they become advocates for peace in the Middle East.

Hong dissects her experiences as an Asian American to create an intricate meditation on racial awareness in the U.S. Through a combination of cultural criticism and personal stories, Hong, a poet, lays bare the shame and confusion she felt in her youth as the daughter of Korean immigrants, and the way those feelings morphed as she grew older. From analyzing Richard Pryor’s stand-up to interrogating her relationship with the English language, Hong underscores essential themes of identity and otherness. 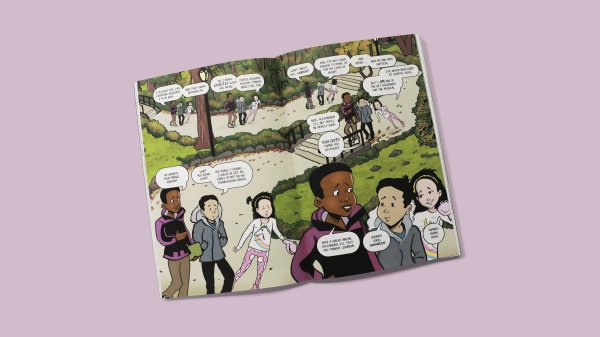 Raina Telgemeier on Why Jerry Craft's Newbery Medal Matters
Next Up: Editor's Pick