After Book Leak, Republicans Face a Choice on Whom to Believe: President Trump or John Bolton?

U.S. President Donald Trump speaks to members of the media as National Security Adviser John Bolton listens in the Oval Office of the White House in Washington DC on August 20, 2019.
lex Wong—Getty Images
By Vera Bergengruen and Philip Elliott

For weeks, Senate Republican leaders have nursed a whisper campaign aimed at undermining the credibility of Trump’s former National Security Advisor John Bolton, according to two senior leadership aides. The goal: keep the Congressional GOP unified against calls for witnesses in the impeachment trial of President Donald Trump.

On Monday, that whisper campaign broke into the open. The New York Times revealed on Sunday that Bolton alleges in a forthcoming book that Trump admitted last August that he was withholding $390 million of military aid from Ukraine until the new government there announced investigations into former vice president Joe Biden and others.

The revelation put Senate Republicans in a tight spot. It was potential eyewitness evidence of the abuse of power Democrats accuse Trump of committing in their first article of impeachment — and it came not from a partisan anti-Trumper, but a rock-ribbed Republican with a hawkish history dating back to Ronald Reagan’s presidency.

When Republican Senators entered the Capitol on Monday morning before the second day of Trump’s defense, the efforts of McConnell and his team appeared to have paid off, with Senators declining to address the substance of Bolton’s allegations and instead questioning his credibility. But it’s unclear whether that cohesion will last, as pressure mounts on Senators to call Bolton in to testify in light of these new claims.

Passing reporters on their way into the chamber, several Senators cast doubt on Bolton’s motives for publishing his claims. The Senate’s number-three Republican kept a phone pressed to his ear before briefly stopping to talk to reporters in the basement of the Capitol. “It’s a story about selected leaks from a book you can preorder on Amazon.com from John Bolton,” Wyoming Republican Sen. John Barasso ultimately said dismissively.

Barasso and his colleague, Indiana Sen. Mike Braun, subsequently held a press conference discussing the development, but repeatedly noted that, while, it would intensify the rhetoric surrounding a vote on witnesses, it would not ultimately change Trump’s likely acquittal. “I think it’s [going to] vindicate the President,” Braun predicted.

But the nature of Bolton’s allegations would be hard for any objective juror to ignore, undercutting the heart of the President’s defense. He offers a firsthand account of what more than two dozen other officials described in the impeachment investigation last fall: that Trump intentionally leveraged security assistance that had already been approved by Congress in order to get the Ukrainian government to open probes into his political opponents. Trump and the White House dismissed the whistleblower complaint that started it all, as well as the accounts of those officials, as “secondhand” and hearsay.

But as Trump’s national security advisor, Bolton was present for several key moments at the heart of the Democrats’ impeachment inquiry; the very title of his book is “The Room Where It Happened.” And these accounts are significant because the source is Bolton himself, an established if controversial figure in Republican Party national security circles who served in the administrations of Presidents Reagan and George W. Bush.

The sheer depth of Bolton’s resumé threatens some Republicans’ efforts to dismiss the longtime conservative official and Trump national security adviser the same way they brushed off minor characters in the Ukraine saga. One Republican leadership aide asked in half-jest if the media-savvy Bolton was planning “the full Parnas,” a ding against a former associate of Trump personal attorney Rudy Giuliani, Lev Parnas, who has been making the rounds with his own recollections about working on Ukraine issues. Parnas is under federal indictment for campaign finance violations.

As the Senate returned for its first full day of 2020 to news that Bolton would honor a subpoena early this month, Republicans in the Capitol were insinuating that Bolton might have ulterior motives for offering to testify, according to the two Republican aides in leadership.

First, the officials noted, Bolton was fired from the White House by presidential tweet. Second, Bolton is working on a book to publishers and leaks like the one Sunday night only boost the allure for publishers. Finally, the leadership aides say, Republicans at all levels have asked themselves if Bolton is trying to settle scores with his former boss. They have tried to plant the doubts without explicitly provoking Bolton, whom many of the lawmakers have known for years and whose political committee has written checks to many.

But quickly after news of Bolton’s allegations broke, cracks appeared in McConnell’s efforts to keep Republicans on pace for a speedy conclusion of the trial. The allegations reporting in the Times seemed to boost vulnerable Republicans like Sens. Mitt Romney and Susan Collins who had previously indicated they had been leaning towards voting for witnesses at the trial.

“The reports about John Bolton’s book strengthens the case for witnesses and have prompted a number of conversations among my colleagues,” said Collins, who is facing a tough re-election in the fall and has been closely watched as a possible swing vote, noting that she had said all along she was likely to call for witnesses as she did in President Bill Clinton’s 1999 trial.

Sen. Lindsey Graham told reporters on Monday he wanted to see Bolton’s manuscript. “If there is a desire and decision by the Senate to call Democratic witnesses, then at a minimum the Senate should allow President @realDonaldTrump to call all relevant witnesses he has requested,” he tweeted, in a shift from his dismissal of the need for any witnesses just two days before.

Trump and his allies have argued Bolton’s conversations with the president are covered by executive privilege, and therefore can reject a subpoena from Congress. In recent years, however, that absolute claim has been rejected by courts, casting doubt on Trump’s team’s footing. After Trump’s legal team barred aides from testifying in the House impeachment inquiry last year, Bolton asked the courts to rule on whether or not he should testify. He later said he would do so if subpoenaed by Congress.

Ultimately, it was the Times’ report that offered a glimpse of what Bolton’s testimony might reveal. Bolton’s manuscript was submitted to the National Security Council for review on December 30, according to a letter from his lawyer. It was still under initial review when the draft leaked on Sunday evening, NSC spokesman John Ullyot told TIME in a statement, adding that “no White House personnel outside NSC have reviewed the manuscript.”

With a historic impeachment trial hanging in the balance, it now seems unavoidable that Republicans will be forced to make a choice: who will they believe, Donald Trump or one of their own? Some Republican Senators simply seem to be buying time. “We have a couple more days to hear from the White House Counsel,” deflected Iowa Sen. Joni Ernst, a close McConnell lieutenant. “Let’s hear what they have to say.” 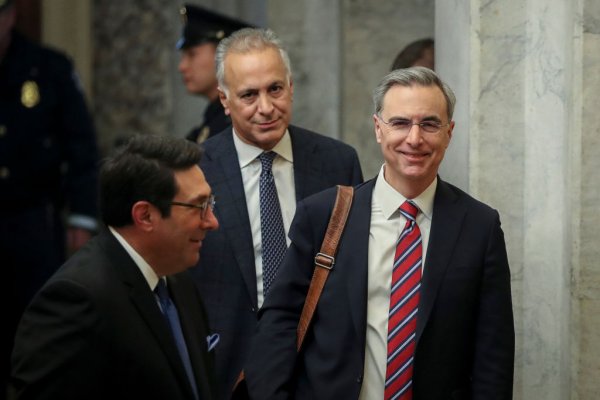