Donald Trump’s impeachment team began their second day of arguments less than 24 hours after revelations from John Bolton threatened to undermine key aspects of their defense. But Trump’s lawyers decided to plow ahead on Monday, largely ignoring the Bolton news and keeping with the planned defense they had outlined over the weekend.

“We deal with transcript evidence,” Trump’s lawyer Jay Sekulow said at the outset of Monday’s arguments. “We deal with publicly available information. We do not deal with speculation, allegations that are not based on evidentiary standards at all.” He did not mention Bolton, and swiftly moved on.

Less than 24 hours earlier, The New York Times reported that former National Security Advisor Bolton wrote in a manuscript of his upcoming book that Trump explicitly said last August he did not want to release military aid to Ukraine until the country pursued investigations into his political rivals. The explosive report undercuts two crucial facets of the defense Trump’s lawyers had begun advancing on Saturday: that Trump’s decision to freeze had nothing to do with investigations Trump wanted into Joe Biden and his son, and that the Democrats had no witnesses directly testifying to prove the quid pro quo they allege.

Trump denies Bolton’s account. “I NEVER told John Bolton that the aid to Ukraine was tied to investigations into Democrats, including the Bidens,” he tweeted just past midnight on Jan. 27.

But the Bolton revelation will test Trump’s lawyers’ plan to defend him by arguing there was no quid pro quo. And it has raised questions about whether White House counsel Pat Cipollone and his deputies Patrick Philbin and Michael Purpura knew the details of Bolton’s allegations before they mounted their defense of Trump’s conduct.

While Bolton transmitted his manuscript to the White House for review weeks ago, according to the New York Times, National Security Council spokesman John Ullyot says Cipollone and his team had not seen the document. “Ambassador Bolton’s manuscript was submitted to the NSC for pre-publication review and has been under initial review by the NSC,” Ullyot said in a statement on Jan. 27, referring to the National Security Council. “No White House personnel outside NSC have reviewed the manuscript.”

Purpura argued Saturday, before the Bolton story broke, that “not a single witness testified that the President himself said that there was any connection between any investigations and security assistance, a presidential meeting or anything else.” This would be refuted by Bolton’s testimony, based on the reported contents of his book manuscript. But Sekulow repeated this claim on Monday, indicating that the core components of their factual defense of the president haven’t changed. (Bolton’s accounts were not included in the record from the House impeachment inquiry, but Bolton has said he would testify before the Senate if subpoenaed.)

Over the course of the day, Trump’s lawyers mounted a multi-faceted defense of the President that kept in line with what they had signaled their strategy would be during what they called a two-hour “preview” in their first appearance over the weekend. Former independent counsel Kenneth Starr used the first hour on Monday to explain the historical and constitutional basis for impeachment, arguing that a crime should be committed in a presidential impeachment and that impeachment articles should be passed with bipartisan support, neither of which occurred here. “Like war, impeachment is hell,” Starr said. “It divides the country like nothing else.”

Purpura went over the factual record to establish that the Ukrainian aid was released without any public action on investigations and that Trump was interested in “corruption and burden-sharing,” rather than investigations into his political rivals. Jane Raskin took the lectern to address Rudy Giuliani’s role in the impeachment saga, calling him merely a “colorful distraction” and “proxy villain” for the House managers. Philbin spoke about the obstruction of Congress article, arguing the House managers “are saying for the president to defend the prerogatives his office, to defend constitutionally grounded principles of executive branch privileges or immunities, is an impeachable offense.” Two lawyers spoke about corruption in Ukraine and Hunter Biden’s role with Ukrainian oil and natural gas company Burisma.

Constitutional law expert Alan Dershowitz was the first and only one of Trump’s lawyers to mention Bolton by name in the Senate chamber, just after 8:30 pm. “Nothing in the Bolton revelations, even if true, would rise to the level of an abuse of power or an impeachable offense,” Dershowitz said.

As the rest of the defense lawyers laid out their case without mention of the former national security adviser, the Bolton news hung over the day outside the Senate chamber, and lawmakers were bombarded with questions about it during breaks in the Capitol halls. Many Republicans took the position that the Bolton news shouldn’t affect how the defense lawyers lay out their case. “To me, the facts of the case remain the same,” Republican Sen. John Barrasso of Wyoming said.

Barrasso wasn’t the only Republican to use that line. “The facts of this case remain the same,” said Rep. Elise Stefanik, a Republican from New York, arguing it was House Intelligence Committee Chairman Adam Schiff’s “choice” not to have Bolton testify in the House. “This is an unfair, unconstitutional, and half-baked set of impeachment articles that were sent over to the Senate,” she said. (Bolton was invited to testify in the House impeachment inquiry voluntarily; he declined, and he was not subpoenaed.)

While the Bolton allegations have not altered Trump’s legal defense strategy for now, that may change later in the week, when the Senate will vote on whether to call additional witnesses in the trial. The White House and Senate Republicans have been saying for weeks that they don’t want to call witnesses. But only four Republicans need to break ranks and vote with a united Democratic caucus to call witnesses, and the Bolton news has increased the pressure on some Republicans for that vote. If he is called to testify, that could set up an executive privilege fight with the White House. 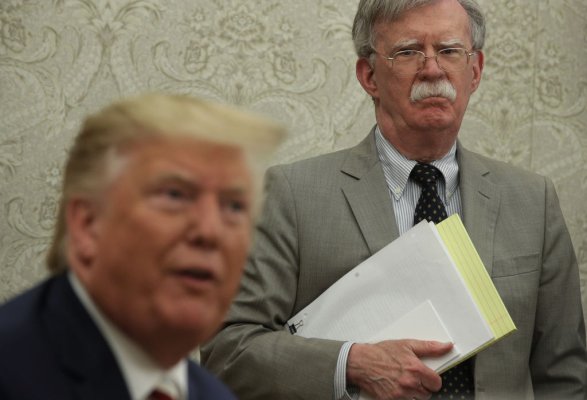 After Book Leak, Republicans Face a Choice on Whom to Believe: President Trump or John Bolton?
Next Up: Editor's Pick