Germany Is Often Praised for Facing Up to Its Nazi Past. But Even There, the Memory of the Holocaust Is Still Up for Debate

As the world marks the 75th anniversary of the Jan. 27, 1945, liberation of Auschwitz — a key part of a series of watershed World War II anniversaries this year — all eyes will be on Germany. Angela Merkel set the tone with a moving and highly reflective speech at the Auschwitz Memorial in early December, when she expressed a “deep sense of shame for the barbaric crimes that were here committed by Germans.” The chancellor has come to embody how Germany has faced its Nazi past.

As far as Germany’s institutions and intellectuals are concerned, there exists a broad consensus that the country has confronted its crimes and learned its lessons. Major cities boast impressive monuments, museums and centers dedicated to the study of antisemitism and the Holocaust. Germany’s institutions illustrate a conscious and responsible approach to dealing with past sins. Some observers, like the American moral philosopher Susan Neiman, make the case that it’s time for the rest of the world to begin “learning from the Germans.”

There is a lot of truth to this. Yet a different picture emerges when we leave the nation’s metropolises and look beyond the highly ritualized ways of commemorating the Nazi past. While central questions about how to confront that legacy have been settled in the country’s history textbooks, they are still subject to controversy in villages and towns.

For instance, while it is inconceivable to encounter a monument dedicated to a Nazi leader in Berlin or Munich, the countryside leaves more room for ambivalence. One can find a case in point in a small village just about an hour south of Munich. The beautiful cemetery on the island Frauenchiemsee in Lake Chiemsee is home to a cenotaph built in honor of one of the most abhorrent war criminals of the 20th century, Alfred Jodl. Jodl was the Wehrmacht’s second in command and was tried and hanged by the Allies in Nuremberg.

As with all major Nazi war criminals executed in Nuremberg, Jodl was cremated and his ashes scattered to prevent his grave’s becoming a pilgrimage site for old and new Nazis. Nevertheless, his descendants managed to erect a cenotaph for Jodl in the form of an iron cross (a former German military decoration), which forms the centerpiece of the tomb of the Jodl family at Frauenchiemsee. It was only a few years ago, when Munich artist Wolfram Kastner smeared the cenotaph with red paint, that any serious debate began about a site that fundamentally contradicted the official consensus, which leaves no room to honor Nazi perpetrators. Yet instead of using the desecration of the monument as a pretext to remove it, one local court fined the artist, while another court reaffirmed and renewed the Jodl family’s title to the tomb — including the cenotaph — for another 20 years.

Similarly, while citizens of cities with high-profile Nazi sites, like Dachau or Nuremberg, have long learned to stop claiming ignorance, such is not the case in a place like Mühldorf am Inn, about an hour east of Munich. During the war, Mühldorf was home to a system of small concentration and labor camps.

Over two thousand inmates, the majority Hungarian Jews, were worked to death in these camps during the final stretch of the war, in an effort to build a massive armaments factory. They were buried in a mass grave in a vast forest. For decades, a group of local activists tried to convince the authorities in charge to erect a memorial site for the dead, which would discuss the town’s role in the regime. Their efforts exemplify the kind of grassroots activism of ordinary citizens — or history “from below” — that has led to the establishment of monuments, memorials and museums all over Germany since the 1980s. Facing significant resistance from local authorities and other citizens, only in 2018 did this group of activists succeed in building a memorial site for the dead.

Concrete slabs lead to the places of the former mass grave of the former concentration camp Muehldorf at the Muehldorfer Hart, southern Germany, pictured on April 26, 2018.
AFP via Getty Images

How about the involvement of ordinary Germans in Nazi crimes? Historians, museums and history textbooks agree today that millions of Germans voluntarily supported the regime and participated in war crimes. But many ordinary Germans reject that consensus, choosing instead to see Germans — civilians and soldiers alike — as victims of a brutal regime and a murderous war. Such a blurring of the distinction between perpetrator and victim is not the sole prerogative of right-wingers and neo-Nazis.

For instance, only in 2018, the well-off Bavarian town Traunstein, mostly known for the fact that a young Joseph Ratzinger went to high school there, built a new monument dedicated to the fallen German soldiers of both world wars. The monument, located in the city center, proclaims that German soldiers were “seduced” to follow Hitler into the war and lists in detail the many ways they suffered and died. It speaks neither of their crimes nor their victims.

Perhaps the city does not realize that it is engaged in a reframing of the questions concerning responsibility and victimhood. The result is not only a distortion of historical truth, but a distressing message: if even future generations of Germans are not encouraged to ponder the role of ordinary citizens on the road to the abyss of the Holocaust, who in the world will ask this question at all?

These patterns can be found all over smaller communities, towns and cities in Germany. Towns like Coburg name streets after Nazi profiteers, and in the village of Herxheim am Berg a church bell dedicated to Adolf Hitler is still ringing; meanwhile, numerous smaller former sites of terror, forced labor and murder lack adequate memorials or museums. The memorial culture of the countryside therefore holds a key to a more complete understanding of the mechanisms and contradictions of Germany’s coming to terms with its Nazi past today.

The Protestant Church in Herxheim am Berg, in front of which an information board had recently been erected, on March 19, 2019. The plaque explains how the bell with the inscription "Everything for the Fatherland. Adolf Hitler" had entered the church and that it would remain there as a reminder for the future.
Uwe Anspach/dpa via Getty Image

It would be wrong, however, to blame the differences between an elite discourse and what happens in the countryside purely on ignorance or anti-elite sentiment. Acknowledging that one’s grandparents were Nazis or that one’s town was complicit with the regime is a much harder process in a small, tight-knit community than building monuments that portray victims or talk about perpetrators in an abstract way.

Moreover, one should not underestimate the dedication and determination of local activists, the vast majority of whom are engaged citizens, not professional historians or experts in these matters. In many towns, they have made sure that the victims have not been forgotten, and that those who wish to forget the Nazi past are not allowed to. Without people like Kastner, for example, hardly anyone would know about the cenotaph for Alfred Jodl today; without the local activists of Mühldorf, there would be no memorial for the town’s victims of Nazi terror.

Seventy-five years after the liberation of Auschwitz, Germany’s confrontation with its Nazi past is still an ongoing process. Germans continue to debate, argue and disagree about crucial questions concerning their attitudes toward perpetrators and victims, guilt and responsibility, and the role and fate of Germans during the war. While it is certainly cause for optimism that in many places local activists eventually succeeded, it is also clear that these questions require continued engagement and debate.

The series of anniversaries in 2020 should therefore not only serve to commemorate or even celebrate the achievements of Germany’s confrontation with its Nazi past. Instead, the future of memory remains at least as important as the past itself.

Jacob S. Eder teaches history at the Barenboim-Said Akademie in Berlin and and is the author of Holocaust Angst: The Federal Republic of Germany and American Holocaust Memory since the 1970s. 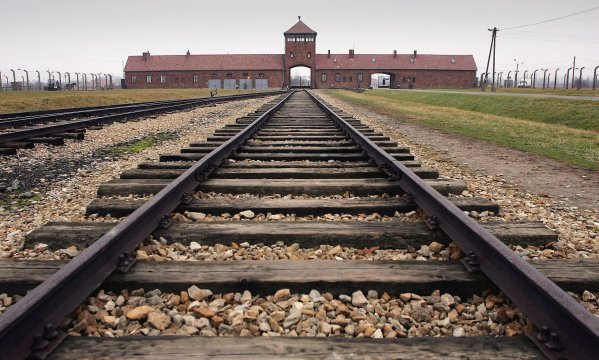 What Translating a Firsthand Account of Life in Auschwitz Taught Me About the Language of Suffering
Next Up: Editor's Pick