An NYPD cop and his fiancée have been arrested on murder charges after his 8-year-old son, Thomas Valva, died from hypothermia in the home’s garage.

Forty-year-old Michael Valva and his 42-year-old fiancée Angela Pollina were arrested on Friday by Suffolk County police on charges of second degree murder.

“They engaged in conduct that created a grave risk of death to this child,” Suffolk County Police Commissioner Geraldine Hart said at a press conference on Friday. According to police, the boy was allegedly locked in the family’s unheated garage overnight and the outside temperature was 19 degrees.

Hart said police first responded to a 911 call on Jan. 17, in which Valva said his son had fallen while waiting for the school bus. When police arrived to the home in Center Morchices, N.Y., they found Valva preforming CPR on his son in the basement. The boy was rushed to Long Island Community Hospital, where he was pronounced dead.

Hart said that at the time of the boy’s arrival at the hospital, his body temperature was just 76 degrees. His death has been ruled a homicide. Police began an investigation and said they found inconsistencies in Valva’s initial version of the events. They also said they reviewed surveillance footage from inside and outside the house that the family used to “closely” monitor their six children.

According to police, Valva has two other sons who are 6 and 10, and Pollina has twin 11-year-old girls and one 6-year-old daughter. Police said they believe the older boys were sometimes made to sleep in the family’s garage or be denied food. “We are still investigating the extent of the abuse and if it extended to all the children,” Hart said.

The other children were removed from Valva’s home after Thomas’ death on Jan. 17, per police.

The Associated Press reports that at Valva and Pollina’s arraignment Suffolk County District Attorney Timothy Sini said that the pair “evinced no regard for this child’s human life… They caused his death both by forcing him to sleep in frigid temperatures in the garage and then by failing to do anything to help him as he died right in front of their eyes.” The AP also reports that prosecutors said they had audio files of the couple discussing the fact Thomas was dying of hypothermia.

The AP reports the pair both pleaded not guilty and were ordered held without bail. 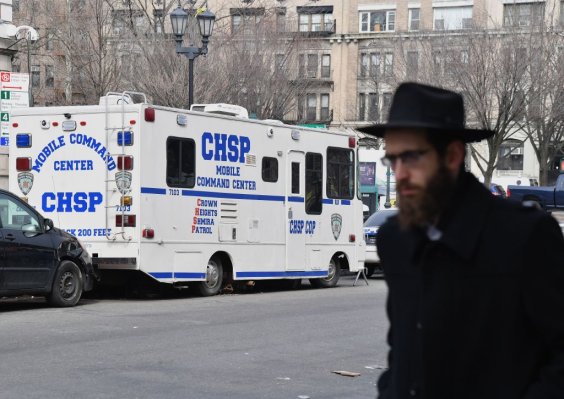 NYPD Ups Presence in Jewish Communities After Attacks
Next Up: Editor's Pick