Rep. Adam Schiff had just concluded the first hours-long stretch of opening arguments in the Senate’s impeachment trial of President Donald Trump Wednesday evening when he exited an elevator bank in the Capitol and received a surprising compliment.

That rare exchange of bipartisan comity, which came in the midst of one of the most polarizing weeks on Capitol Hill, illuminated the challenges that Schiff and the six other impeachment managers encountered in the trial’s first phase. No matter how many facts they could line up, how strong a narrative they could tell, or how many witness testimonies they could recirculate, they had been handed a virtually impossible task: convincing a Republican-led Senate to remove a President from office who is exceedingly popular with many of those lawmaker’s voter base.

“The Democratic managers are literally operating with both hands tied behind their back,” Delaware Sen. Chris Coons said Friday before entering the Senate chamber for the final day of opening arguments from the Democrats. Their presentations, he continued, have been “remarkably strong and compelling given the severe limitations they’ve been under to develop witnesses and evidence.”

As Republicans repeatedly pointed out, without new evidence permitted at this stage of the trial, Democrats were reiterating the points they have been making for months: that Trump had pressured a foreign country into helping him in the 2020 election by withholding both foreign aid and a White House meeting sought by the Ukrainians. Democrats said that by requesting the country’s President to probe a top political rival, Trump abused the power of his office by placing his own reelection prospects ahead of U.S. national security, and subsequently obstructed Congress when they tried to discern what happened.

Although several new pieces of information had emerged since Democrats wrapped up their inquiry — like e-mails between administration officials discussing the aid hold up —Democrats largely focused on the evidence they had amassed from their inquiry.

Using nearly the full 24 hours allotted to them over the course of three days, the seven managers, led by Schiff, individually stood at the wooden lectern on the Senate, next to a table filled with cups of water for periodic refreshment. The managers brought up immaculately prepared binders, filled with pages of typed information. They frequently replayed public testimony for the chamber from the witnesses who testified before the House Intelligence Committee last year as part of the impeachment inquiry – clearly an effort to show not only the Senators the information that they had gathered, but the American public.

When Pelosi selected the seven managers earlier this month, she praised their breadth and depth of legal and congressional expertise. “The emphasis is on litigators. The emphasis is on comfort level in the courtroom,” she said at the time.

As the arguments evolved, the managers’ different backgrounds were used to highlight various aspects of the case. Rep. Jason Crow, who served three tours of duty in Iraq and Afghanistan, used his experience to stress in his presentation how Trump’s hold-up of foreign aid to Ukraine adversely impacted that country’s military. “When we talk about troops not getting the equipment that they need when they need it, it’s personal to me,” he said, emphasizing what he called the “human cost” of Trump’s decision to hold up the security assistance for personal gain.

Rep. Zoe Lofgren, the only manager who has participated in the presidential impeachment processes of Richard Nixon, Bill Clinton and now Trump, used that knowledge to argue Trump’s obstruction of Congress was unprecedented. “Even President Nixon, who famously attempted to defy a subpoena for tape recordings of his conversations, he let his most senior staff testify before Congress,” she said. “Not only did Nixon allow his staff to testify before Congress, he publicly directed them to testify without demanding a subpoena.”

And Schiff, who began and closed each day of arguments, repeatedly framed the managers’ case from a birds-eye view, claiming that the Senate’s ultimate verdict on Trump’s impeachment would reveal the true character of the country.

The Democrats’ arguments were not without hiccups. There were technical difficulties at points, when their presentations would not play. And while most of the Democrats seemed intent on keeping their tone as even-keeled as possible when addressing their Republican colleagues, there were some flashes of frustration on Friday evening, as some raised their voices and used stronger language to make their final points.

At one point in his closing remarks, Schiff cited a CBS News report claiming Republican Senators were told their heads would be “on a pike” if they voted to convict Trump, angering members of the conference who pushed back on the allegation. “Its insulting and demeaning,” Sen. James Lankford said Friday evening.

Still, veteran Republicans both inside and outside of Congress conceded that the arguments were, at the very least, comprehensive. “I think that they are well prepared. They have spent the 33 days they had getting ready,” Sen. Roy Blunt said on Thursday. But he quickly added that their repetitiveness was vexing. “[They] basically got about one hour of presentation, and they gave it … six times on Tuesday and eight times yesterday. They’re just not much new here.”

Blunt was just one of many Republicans in the chamber who showed no outward signs of being persuaded. Even Graham, despite the compliments he bestowed on Schiff, repeatedly pushed back on the premise of his arguments throughout the week. “[Schiff] told me that I have to get rid of this President now because I can’t trust him to do what’s best for the country because he’ll only do what’s best for Donald Trump,” Graham said Friday. “That decision needs to be made by the voters, and here is how I’m going to make that decision: I trust Donald Trump to do what’s best for the country.”

Of course, Democrats have argued that the reason they did not present anything new is that Republicans refused to ensure the inclusion of new witnesses testimony and documents at the start of the trial. The Senate is slated to vote on whether or not to allow witnesses and documents after the White House makes its case and the Senators complete their allotted 16 hours of questioning both legal teams. Democrats, assuming they remain united, need to convince at least four Republican Senators to join them in the vote to permit new evidence.

While Schiff again focused Friday’s final arguments on the necessity of upholding the values of the Constitution and preserving the balance of powers, it was apparent in his final plea that pushing for additional evidence was a the forefront. “I implore you to give America a fairer trial,” he said. “She’s worth it.” 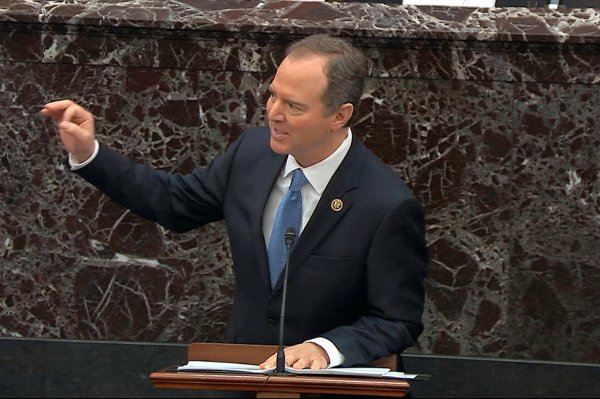 Dems Invoke National Security During Impeachment
Next Up: Editor's Pick