The 5 Best Songs of the Week, from Doja Cat to Rosalía

The Birds of Prey soundtrack continues to gift us with a wealth of new music, like Doja Cat’s unimpeachably catchy “Boss B-tch.” Rosalía goes back to her flamenco style with the haunting “Juro Que.” Pop singer-songwriter L Devine flirts with the edges of punk on “Boring People.” The Shadowboxers show what three vocalists and some throwback funk-R&B can do. And Netflix releases the viral medieval ballad (yes, really) “Toss a Coin to Your Witcher” from The Witcher, completing the circle of the show’s pop culture takeover.

Doja Cat is no stranger to a catchy beat: her early viral hit “Mooo!” proved the power of a memorable gimmick, and this fall’s album Hot Pink was full of snappy, meme-able tracks. The new “Boss B-tch” may be her best yet. Released as part of the upcoming Birds of Prey movie soundtrack, it’s the ultimate confidence-boosting banger. Doja Cat brings attitude to spare over a fast-paced club beat that doesn’t let up for an instant. It may just become your next favorite workout song or pump-up track. “I wear the hat and I wear the pants / I am advanced, so I get advance” may not be the most complex of lyrics, but it certainly does the trick.

“Juro Que” from Spanish pop artist Rosalía sees the talented singer returning to the style that made her a force to be reckoned with from the outset: her modern interpretation of flamenco. The first single off her next project, “Juro Que” is acoustic and mesmerizing, just Spanish guitar, hand claps, the echo of supportive spectators and Rosalía’s crystalline trill. She is as much a visual and narrative artist as a sonic one, so it’s worthwhile to experience the song alongside the music video, which tells the story of a woman pining for her imprisoned lover as she doubles down on her commitment to their romance. (“Juro que” translates to “I swear that”; she’s promising to wait for him.) Rosalía is up for a Grammy for Best New Artist this weekend and will be performing at the beleaguered show, which should benefit from the fresh talent and storytelling she brings to the table.

L Devine is an English singer-songwriter with a punk sensibility that translates into brooding, catchy pop — like on the instant earworm “Boring People.” “I got my sh-t together, I read the news. But I’m faking, no clue,” she deadpans. Something about her blasé delivery of hard truths hits like a gut punch. Devine got her start as a kid with a punk band before evolving toward the pop-leaning place she occupies today; she’s all of 22, but her songwriting and performance possess a world-weariness that suggests hard-earned wisdom well beyond her years.

“Won’t Ever Say Goodbye,” The Shadowboxers

There’s something reassuring about the retro funk-R&B of The Shadowboxers, a trio of artists who revel in barbershop harmonies and smooth-talking lyricism. “Won’t Ever Say Goodbye” is sweet as a first kiss and warm as a hug. The falsettos soar, the melody bounces with joyous yearning and the whole package feels familiar, like a song you’ve forgotten but are happy to rediscover. The Shadowboxers started as a backing band for the Indigo Girls and toured with Justin Timberlake as his opening act; their next self-produced project promises more music that finds the sweet spot between throwback influences and contemporary songwriting.

“Toss a Coin to Your Witcher,” Giona Ostinelli & Sonya Belousova

What to make of “Toss a Coin to Your Witcher,” a song composed for the Henry Cavill-starring Netflix fantasy show The Witcher, sung in one of the first episodes by a traveling bard to hail the greatness of the titular character, turned into a viral joke by critics and fans who rapidly devoured the series, and now — at long last — released into the world in the form of an actual streaming song? Technically, it is a “medieval ballad,” as a press release notes; it starts with the gentle strumming of a lute and actor Joey Batey’s poetic recitations of an encounter with bad guys and the namesake Witcher’s battle prowess. It builds to an appropriately cinematic orchestral climax; Geralt of Rivia’s story is nothing if not melodramatic. But the song is also the ultimate example of how the internet can latch onto something somewhat obscure and transform it into a central part of pop culture. The Witcher was first a Polish fantasy novel, turned into a hit video game, now a show, and — in this new iteration — a vehicle for music. In 2020, that ability to exist across all platforms is just about the smartest move a piece of intellectual property can make. 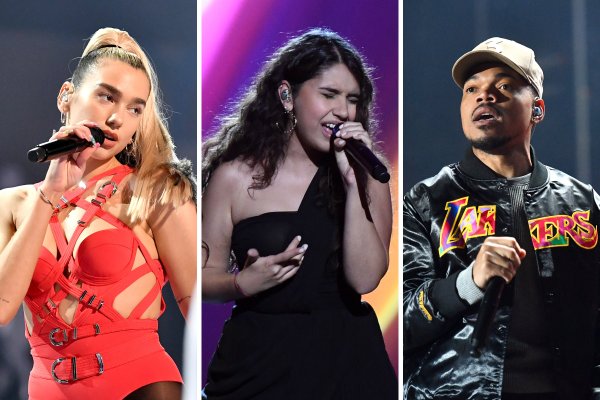 Everything You Need to Know About the Best New Artist Grammy
Next Up: Editor's Pick