Hawaii Representative and Democratic presidential candidate Tulsi Gabbard filed a defamation suit on Wednesday against former Secretary of State Hillary Clinton, alleging that Clinton “lied” about Gabbard and “harmed” her campaign when she appeared to suggest in a 2019 podcast interview that Gabbard was a “Russian asset.”

Legal experts are split over whether Gabbard can win the case. It’ll depend on whether her lawyers can prove that Clinton’s comments were “statements of fact” or “statements of opinion”—and several defamation experts TIME reached for comment disagreed on the answer.

“Secretary Clinton’s statement is right on the cusp,” Rodney Smolla, the Dean of the Delaware Law School of Widener University and a defamation expert, told TIME in an email. “For Clinton to label Gabbard a ‘Russian asset’ could be understood as mere hyperbole. But it could also be understood as implying that Clinton has ‘inside knowledge'” regarding Gabbard and the Russians. He added that Gabbard’s suit has “a solid fighting chance of succeeding.”

Joseph Cammarata, an attorney who represented seven of Bill Cosby‘s accusers in a defamation lawsuit against the comedian, described Gabbard’s case as strong. Those listening to Clinton’s interview would have reasonably believed that she was operating with “undisclosed facts” and describing the truth as she understood it — making her comments “statements of fact,” he told TIME.

Lyrissa Lidsky, the Dean of the University of Missouri School of Law and an expert on defamation, was much less optimistic about Gabbard’s prospects in court. It was clear, Lidsky told TIME, that the former Secretary of State was being hyperbolic in her comments. “It appears from the context that Hillary Clinton wasn’t saying that Tulsi Gabbard actually works for or is paid by the Russians, [but] rather that her candidacy advances Russian interests,” she said. “She’s speaking figuratively rather than strictly factually.”

Christina Hull Eikhoff, a partner at the Atlanta law firm Alston & Bird who specializes in defamation law, said that Gabbard’s suit appeared to be more about “political posturing” than winning in a court of law. “It would be the longest of long shots, in my opinion,” she said.

Gabbard’s lawsuit, which was filed in U.S. District Court in Manhattan, alleges that Clinton “lied” about Gabbard “in a deliberate attempt to derail Tulsi’s presidential campaign.” It argues that Gabbard suffered substantial economic losses as a result and demands at least $50 million in damages.

The complaint centers on an Oct. 17 interview Clinton gave to “Campaign HQ With David Plouffe,” a popular podcast hosted by former President Barack Obama‘s 2008 campaign manager David Plouffe. When discussing the Democratic presidential primary, Clinton said that “somebody who is currently in the Democratic primary”—she does not use a candidate’s name—is being groomed by the Republican party “to be a third party candidate.”

“She’s the favorite of the Russians,” Clinton continued. “They have a bunch of sites and bots and other ways of supporting her so far. And, that’s assuming Jill Stein will give it up, which she might not because she’s also a Russian asset. Yeah, she’s a Russian asset.”

A day after Clinton’s interview was released, Gabbard tweeted that the former Secretary of State was working to “destroy” her reputation. When asked if Clinton was referring Gabbard in the interview, Clinton spokesman Nick Merrill reportedly responded, “If the nesting doll fits.”

Merrill later doubled down in an interview with CNN. “This is not some outlandish claim. This is reality,” he reportedly said, of Clinton’s “Russian asset” comments. “If the Russian propaganda machine, both their state media and their bot and troll operations, is backing a candidate aligned with their interests, that is just a reality, it is not speculation.” According to NBC, Russian propaganda outlets have portrayed Gabbard more favorably than other Democratic candidates. The Daily Beast also reported that her campaign has received donations from prominent “Putin apologists” in a story that Gabbard, who is a veteran of the Iraq War, later called “fake news.”

But Eikhoff said the fact that Clinton didn’t explicitly use Gabbard’s name in the interview is legally relevant. Defamation law requires the statement in question clearly be “of and concerning the plaintiff,” she told TIME.

Eikhoff added that Gabbard’s case is also weaker because, as Congresswoman and a candidate for president, she is clearly a public figure. “That means she has a heightened standard of proof to pursue a defamation claim, which is to prove not just that the statement was false, but that Hillary Clinton knew it was false, or entertained doubts about its falsity, and said it anyway,” Eikhoff explained. Gabbard’s filing does not appear to suggest she has a “smoking gun” to prove this, Eikhoff added.

Ultimately a judge will decide whether the lawsuit has merit and, if so, it’ll go before a jury. “That’s what juries are for,” Lidsky said. “To decide what the meaning of the statement is.”

Gabbard’s attorney Brian Dunne issued a statement about the lawsuit. “[Gabbard] has seen her political and personal reputation smeared and her candidacy intentionally damaged by Clinton’s malicious and false remarks,” it said. “One would expect someone of Mrs. Clinton’s political background to act with a greater level of maturity and responsibility but her personal hostility toward Rep. Gabbard apparently clouded Mrs. Clinton’s reason and blinded her to U.S. defamation laws.”

When asked to comment on the suit, Merrill was dismissive, writing in an email without elaboration: “That’s ridiculous.” 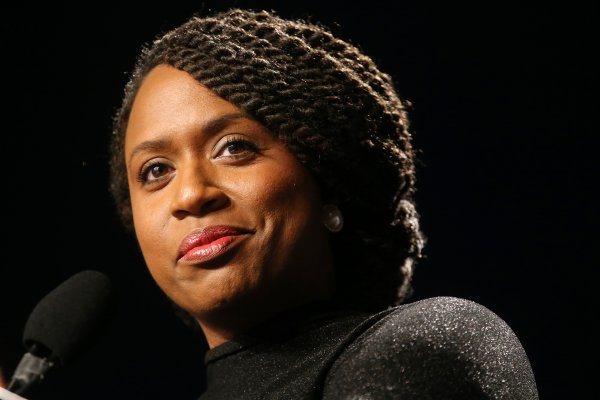 Rep. Ayanna Pressley Reveals Her Hair Loss as She Shares Her ‘Very Personal’ Alopecia Diagnosis
Next Up: Editor's Pick