Africa’s Richest Woman Is Being Accused of Stealing Money from a Country Suffering from an Economic Crisis. Here’s What to Know

In a video interview at a summit hosted by the London School of Economics in May 2017, Isabel dos Santos, Africa’s richest woman, addresses the camera face on. “What’s important is that we start telling the real African story…we hear a lot of the stories of what’s wrong, and I don’t think we hear enough of the stories of what’s right,” says the Angolan businesswoman, before explaining that she strives for “a culture of excellence, a culture of merit, a culture where young people have the opportunity to get a good job.”

Dos Santos was speaking in her capacity as chairwoman of Angola’s giant state oil company, Sonangol Group—a post to which she’d been appointed the previous year by her father, Angola’s president. When her father retired later that year, dos Santos was fired from the position. Leaked documents now show that a day later, she approved $58 million in payments from Sonangol to a company in Dubai directed by one of her business partners.

It’s just one of many corruption allegations that have emerged in January, standing in sharp contrast to the public image dos Santos cultivated as a hard-working entrepreneur, with an estimated worth of over $2 billion and a business empire that spans more than 41 countries. On Sunday, the International Consortium of Investigative Journalists partnered with 36 other media organizations to publish an investigation based on hundreds of thousands of leaked emails, slide presentations, invoices and contracts, looking into the business operations of dos Santos, daughter of Angola’s former president.

Dubbed the “Luanda Leaks,” the documents allegedly show how, with the help of Western advisers, dos Santos built her vast empire through questionable deals and exploiting her family ties at the expense of ordinary Angolans. While the southern African nation is rich in natural resources, particularly oil, a large proportion of the population still remain in extreme poverty and the country has been in recession since 2016. (The country is ranked 149 out of 189 countries on the Human Development Index, which measures life expectancy, education and standard of living .) Dos Santos has denied the allegations. Here’s what to know.

Who is Isobel dos Santos?

Isobel dos Santos, 46, is the eldest daughter of Angola’s former president José Eduardo dos Santos, who served as the country’s autocratic leader from 1979 until 2017, throughout the country’s civil war. She studied electrical engineering at King’s College London, and launched business ventures like a restaurant called Miami Beach in Luanda, Angola’s capital.

In 2002, she married Congolese businessman Sindika Dokolo, a high-profile collector in the art world; for their 10-year wedding anniversary, the couple reportedly flew in dozens of friends and relatives from abroad to Angola for a lavish three day-long celebration. A 2013 profile in Forbes magazine declared that she was Africa’s richest and only female billionaire, as well as the continent’s youngest.

By the time she was 40, Dos Santos owned significant stakes in Angola’s key industries, including banking, cement, diamonds and telecom, and expanded in 2009 to include stakes in Portuguese banks and media companies. Dos Santos is thought to own luxury properties in London, Lisbon, and Monte Carlo, and a luxury residence in Dubai on a seahorse-shaped artificial island, according to the New York Times. In recent years, she has been photographed mingling with stars including Nicole Scherzinger and Paris Hilton.

What is she being accused of?

According to the leaked documents, which span from 1980 to 2018 but largely cover the last ten years, dos Santos benefited from lucrative deals in several of Angola’s key industries during her father’s presidency, and redirected state funds to a web of shell companies worldwide. The documents also allege that dos Santos was implicated in corruption in Angola’s diamond industry. In 1999 the president gave her a 24.5% share in the Angola Selling Corp, with an exclusive license to market Angolan diamonds, to a company controlled by dos Santos and her mother. In 2012, Dokolo signed a deal with Angola’s diamond-trading agency to buy a stake in the Swiss luxury jeweller De Grisogono. The documents allege that this deal was funded by the state company; the New York Times reports that De Grisogono is today facing a total loss. Partially funded through Angolan state funds, the jewelry company hosted annual parties on the French Riviera hosting the likes of Naomi Campbell and Leonardo diCaprio.

What are the accusations involving international companies?

Dos Santos and Dokolo are also accused of establishing and funneling millions of dollars to shell companies in tax havens, including Dubai, Malta and the British Virgin Islands. The documents allege that the Malta office of London-based consulting firm PwC was hired to audit dos Santos’ company accounts. U.S. consulting giants Boston Consulting Group and McKinsey were also allegedly hired by advisers of dos Santos to rescue the struggling Sonangol in 2016. The leaks of invoices from shell companies — tied to dos Santos and her associates — show millions of dollars were paid to these consulting firms. A spokesperson for the Boston Consulting Group told the New York Times that it took steps to “ensure compliance with established policies and avoid corruption and other risks,” while McKinsey said that it was no longer doing any work with dos Santos or her companies.

In contrast, the more-regulated banking sector worked was less inclined to work with dos Santos. According to the documents, global banks including Citibank and Deutsche Bank have declined to work with the dos Santos family in recent years. “This is a story that goes way beyond Angola,” says Alex Vines, director of the Africa Program at Chatham House. “These consultancy firms were really guns-to-hire, very mercenary, and looking at the high fees they could extract without much of a moral compass, that’s alarming. These firms need to do a significant moment of reflection and introspection of whether they have actually lost their way just because of the desire for high profit margins.”

On Tuesday, Portuguese bank EuroBic—where dos Santos is the main shareholder—announced that it will end its business relationship with her and will investigate transfers worth tens of millions of dollars made by her. On Thursday, police said that a Portuguese banker, who had been named as a suspect by Angolan authorities in an investigation into dos Santos, was found dead in an apparent suicide at his home in Lisbon on Wednesday evening. Nuno Ribeiro da Cunha, 45, managed the account of oil company Sonangol at EuroBic.

Speaking on the sidelines of the World Economic Forum in Davos this week, the chairman of accounting giant PwC, Bob Moritz, said an internal investigation would be launched. “When we look at some of the signs that were there, we should have picked them up earlier, and that was our mistake,” Moritz told the Guardian. On Monday, local Portuguese media reported that PwC’s leading tax expert resigned, citing “the seriousness of the Luanda Leaks allegations.”

How has the dos Santos case played out in Angola?

There is already an ongoing investigation in Angola into dos Santos and Dikolo. In December, a court order was read out on state television announcing the seizure of their assets and freezing of their bank accounts. According to the office of Angola’s president João Lourenço, who pledged to fight corruption in the country, the couple could face years in prison if convicted. At Chatham House in London on Tuesday, Vines said a delegation from the Angolan government said they were going through the Luanda Leak dossier, on the understanding that it contains new information pertaining to dos Santos. On Wednesday, the country’s attorney general announced that dos Santos was a formal suspect in an investigation into embezzlement and money laundering during her time as chairwoman of Sonangol, which she held from June 2016 until November 2017. Attorney General Helder Pitta Gros reiterated calls for dos Santos to return to Angola, where she could face potential criminal charges.

Dos Santos’ half brother is also facing corruption charges in Angola, and is alleged to have stolen $500 million during his time as head of the country’s Sovereign Wealth Fund. Experts say that the alleged corruption is not the sole cause of Angola’s economic recession, which has been ongoing since 2016. “The fundamental reason for recession in Angola is that they’re addicted to oil money,” says Vines. “It’s compounded by the fact that in the boom years, the Angolan economy was clearly mismanaged. There was seepage of money, and the allegations in the Luanda files indicate that there could have been significant diversions of funds, but they in themselves aren’t the driver of recession.”

However, the crippling loan repayments related to dos Santos-linked businesses fall on the Angolan state. According to the president’s office, the government will have to repay some $225 million for the deal with De Grisogono.

A view of a property, which cost 13 million pounds, owned by Isabel Dos Santos on January 20, 2020 in London, United Kingdom.
Peter Summers/Getty Images

How has dos Santos responded, and why haven’t prosecutors been able to arrest her yet?

According to the BBC, dos Santos has said the allegations against her are entirely false, and has said there is a politically motivated witch-hunt by the Angolan government. “She’s making the point that the moves against the dos Santos family are all about political consolidation after a transition from her father to Lourenço and that the actions are arbitrary,” says Vines.

According to reports, Dos Santos left Angola in 2018 for the U.K., where she’s thought to own properties in central London. On Monday, Angola’s prosecutor general said on public radio that the country would use “all possible means and activate international mechanisms to bring dos Santos back to the country.” 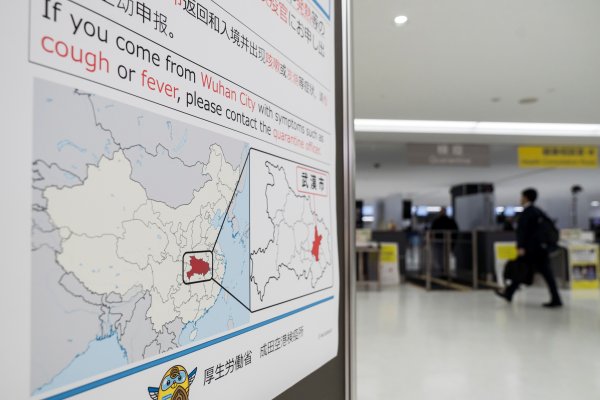 Airlines and Airports Across the World Are Working to Limit the Spread of Deadly Coronavirus. Here's What to Know
Next Up: Editor's Pick