Buckingham Palace is returning to the drawing board to decide how Prince Harry and Meghan Markle should be addressed moving forward, after commentators noted that Markle’s new title appears to misleadingly imply that she and Harry are divorced.

Last week, the Palace confirmed that the couple, who announced they would be stepping back from royal duties, would no longer be using their royal titles starting this spring as part of an agreement which will see them give up their HRH status and scale back their royal duties. Under this arrangement, the Palace said the couple would be addressed moving forward as “Harry, Duke of Sussex” and “Meghan, Duchess of Sussex.”

Historically, however, this formatting has been used by women who have divorced a royal family member, such as Sarah Ferguson and Diana, who became “Sarah, Duchess of York” and “Diana, Princess of Wales” after their respective divorces from Prince Andrew and Prince Charles.

On Monday, the British broadcaster Sky News reported that the Palace had labeled its initial titles for the couple as “erroneous,” and added that they will be rectified. The palace, however, has assured that Harry and Meghan will not lose their titles — as Duke and Duchess of Sussex — outright. Attempts to reach Buckingham Palace for further clarification on Tuesday were unsuccessful.

The confusion surrounding how to address Harry and Meghan moving forward is just one of many questions that remain unanswered, including how the couple will balance their time between their residences in the U.K. and abroad, and how their security arrangements will be managed and funded. The couple’s deal with the Queen is the first of its kind, and reflects a major split in the royal family.

Harry and Meghan had initially proposed they “step back as ‘senior’ members” of the royal family and said they would become financially independent. The Palace, however, rejected this proposition, with the end result being that they give up royal duties, and working roles, altogether.

“Our hope was to continue serving the Queen, the commonwealth, and my military associations, but without public funding,” Harry said during a speech at a charity dinner on Sunday. “Unfortunately, that wasn’t possible.” A day later, on Monday, he flew to Canada to be with Meghan and their baby, Archie. 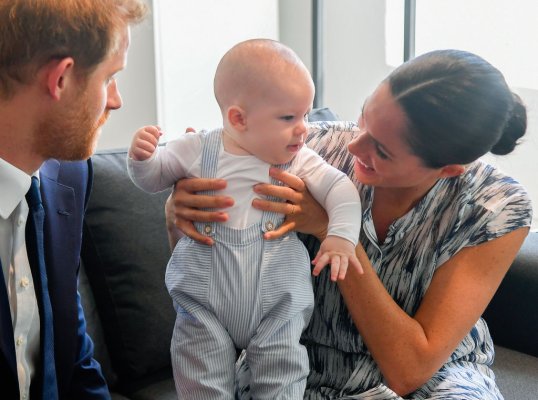 Royal Baby Archie Gets His Close-Up In Prince Harry and Meghan Markle's 2019 Christmas Card
Next Up: Editor's Pick