What Happens Next With Russia's Politics

Russia's President Vladimir Putin during a meeting with Shigeru Kitamura, Secretary-General of the Japanese National Security Council on Jan. 16, 2020.
Mikhail Klimentyev—TASS/Getty Images
Ideas
By Ian Bremmer
Bremmer is a foreign affairs columnist and editor-at-large at TIME. He is the president of Eurasia Group, a political-risk consultancy, and GZERO Media, a company dedicated to providing intelligent and engaging coverage of international affairs. He teaches applied geopolitics at Columbia University’s School of International and Public Affairs and his most recent book is Us vs. Them: The Failure of Globalism.

Russian President Vladimir Putin announced a number of constitutional changes that will be put to the Russian people in a referendum, leading the government of Prime Minister Dmitri Medvedev to resign en masse so as to “give the president of our country the chance to make all decisions necessary.” Unsurprisingly, the political upheaval has prompted mass speculation for what these moves mean for Putin staying on past 2024, when constitutional term limits will force him to give up the country’s presidency. Sort of.

This week’s developments matter because they are Putin’s opening moves to keep power in Russia even after he moves on from the presidency. It wasn’t clear it would come to this—after all, Putin has already been in power for 20 years now, making him the longest-serving ruler of Russia since Josef Stalin. Putin was always likely to remain a key power-broker in Russian politics; this week’s moves helps confirm, ensure and formalize that reality.

Among the announced constitutional reforms this week—a proposal to limit presidential terms to just two (up till now, the limit had been two consecutive terms); any future Russian president will have to have lived in the country for the 25 years proceeding their run for the presidency; the lower house of parliament will now have the power to appoint the prime minister and the cabinet; the upper house will have the power to confirm the head of security-related government positions; the State Council (a body that is supposed to advise the country’s executive) will be more empowered as well.

We still don’t know what Putin’s final play is. He may not know himself, and he has plenty of options available to him—he could return as Prime Minister, stay on as head of his United Russia party, or become the head of that newly empowered State Council. That’s more or less what Nursultan Nazarbayev just did to stay in charge of Kazakhstan. Some have even suggested that Putin will become the ruler of a joint Russia-Belarus union that’s been in talks for years now. Whatever the final position he holds will be, the moves this week are all about equalizing power across various branches of Russia’s political power; in so doing, Putin ensures that he will remain the primary political operator in the country past 2024 in whatever position he holds. No one could use powers in other formal government positions to rival him.

Former prime minister Dmitri Medvedev has already been appointed Putin’s deputy on the Kremlin’s Security Council (another advisory body), a position many observers see as an opportunity to groom him as a possible presidential successor by giving him more exposure/say over defense and foreign policy matters (though Putin retains final word on both). For Medvedev, the move away from the premiership is addition by subtraction; prime ministers in Russia tend to take the brunt of the criticism for domestic missteps, as Medvedev did with the recent unpopular pension reform plans. This is a chance for Medvedev to get the political space he needs and rehabilitate his image—after all, more than half of all Russians believe his job performance leaves much to be desired.

His replacement, Mikhail Mishustin, a former head of the country’s tax service, has already been approved by parliament and taken up the position of Prime Minister. Mishustin is widely seen as a low-wattage holdover; not a candidate to succeed Putin as president. In fact, he may not even be the last prime minister the country sees during Putin’s final presidential term; we may see others hold the post as Putin tests out potential replacements. At the moment, Medvedev is the frontrunner, but a lot can happen between now and 2024. Scratch that—maybe the only certainty of Russian politics is that a lot will happen between now and 2024.

“We associate the change of power with hunger and suffering.” Putin has long relied on the narrative that he alone delivered stability to a 1990s Russia in crises… and is the one maintaining it in an increasingly chaotic world. It’s a powerful message for plenty of voters. Read this piece in the FT to help understand why Putin remains supported by so many.

That all this is Putin trying to engineer a way to stay on as President. Even the almighty Putin realizes that there are political realities to contend with, and he may be pushing the Russian people too far by trying to extend presidential term limits for clear benefit for himself. Combine that with a Russian economy that’s now struggling and approval ratings for Putin nearing record lows for him (though still around 60 percent), and Putin has to put on a show.

No country has tried harder to give off the appearance of being a genuine democracy in the last 20 years than Russia. #LittleVictories 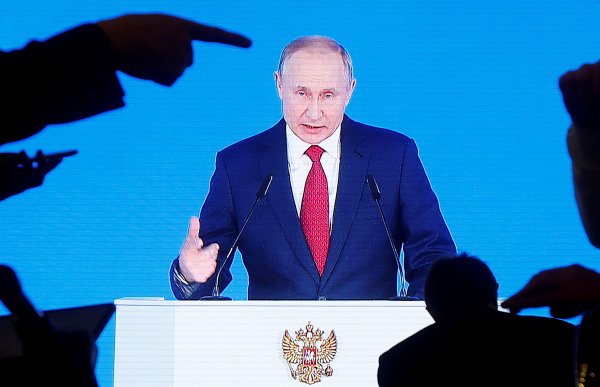 Inside Putin's Plan to Extend Power Beyond 2024
Next Up: Editor's Pick