President Rouhani during interview with Swiss TV station at the annual meeting of the World Economic Forum in Davos, Jan. 23, 2014.
SIPA
By Karl Vick

Two dozen conservative Iranian lawmakers are complaining that President Hassan Rouhani canceled a military missile test by withholding funding required for it. The complaint, reported by the semi-official news agency IRNA on Sunday, is the latest public display of the intense push-and-pull between the new president elected on promises to moderate Iran’s troubled international image and the fundamentalist ideologues responsible for its isolation.

So far, Rouhani has been holding his own, though the strain is evident. On Wednesday night, after a live interview with him on state television did not begin as scheduled, Rouhani turned to Twitter to blame by name the head of state broadcasting. The flap was reportedly over who would interview him–a reporter sympathetic to his moderation effort or a hardliner. When the program finally began, 90 minutes late, he ended up taking questions from both.

It was a fitting compromise. Rouhani himself has a foot in each camp, and Iran is of two minds about the potential new era heralded by the interim deal on the Iranian nuclear program that was forged in Geneva last year. The deal itself appears to enjoy broad backing. While Tehran’s most fundamentalist elements dubbed it a “nuclear holocaust,” conservative power centers including the Revolutionary Guards have praised it. “The diplomatic apparatus has met the aspirations of every single Iranian,” said a recent statement from the Guards, whose extensive economic holdings stand to benefit from an easing of the U.S.-led sanctions under the pact.

Supreme Leader Ayatullah Ali Khamenei made clear on Saturday that Rouhani – who served for years as his national security chief – should have room to maneuver after only “a few months” in office. “Authorities should be given the opportunity to push forward strongly,” the Leader told an audience of air force officers. “Critics should show tolerance towards the government.”

Khamenei himself has withheld comment on the interim pact, a reticence that’s actually typical. Rouhani has written that the Leader declined to weigh in even privately on the last nuclear agreement, signed with European powers in 2003 – but later interceded to discard the deal. Khamenei’s current silence may again permit him the freedom to at some point halt the talks without appearing to reverse himself. But it also reflects the realities of a new situation that, from Iran’s point of view, is complex even by the fluid standards of a government that communicates constantly via Twitter, a service it still blocks inside the country.

“We struggled during Pahlavis’ repressive times,” Khamenei said in Feb. 4 tweet, referring to the country’s American-backed monarchy that was toppled in the 1979 Revolution. “Today we struggle against bids of aberration in the world, a more complicated struggle.”

Iran is treading a thin line. On the one hand, Khamenei seeks removal of the economic sanctions that the Carnegie Endowment for Peace estimates have cost the country north of $100 billion. Yet the Leader also remains deeply skeptical of a wider rapprochement with The Great Satan. “American officials publicly say they do not seek regime change in Iran,” Khamenei also said Saturday. “That’s a lie. They would not hesitate a moment if they could do it.”

And so, the commander of Iran’s northern fleet announced Saturday that warships were headed for the U.S. coast, a symbolic if militarily inconsequential bit of gunboat diplomacy that could be framed as the reply of a proud nation to frequent U.S. naval maneuvers in the Persian Gulf. Meanwhile, the Mehr news agency reports that lawmakers also complain of Rouhani’s Foreign Minister preventing foreign military advisers from helping Iran with its missile technology – potentially a significant development: Iran’s most formidable missiles are from North Korea, and would deliver the nuclear weapon its critics fear Iran is developing. Like the Leader said, “a more complicated struggle” indeed. 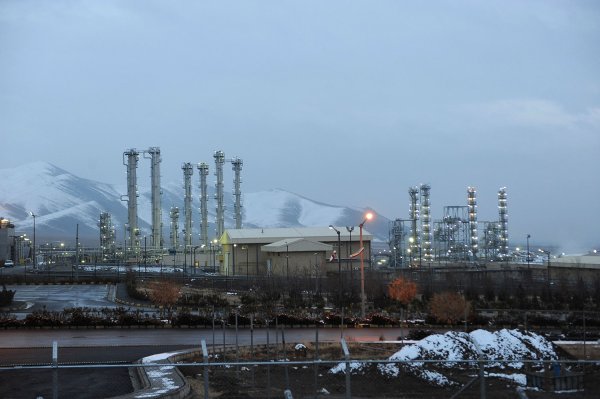 Iran Says It Will Reduce Military Potential of Nuclear Reactor
Next Up: Editor's Pick